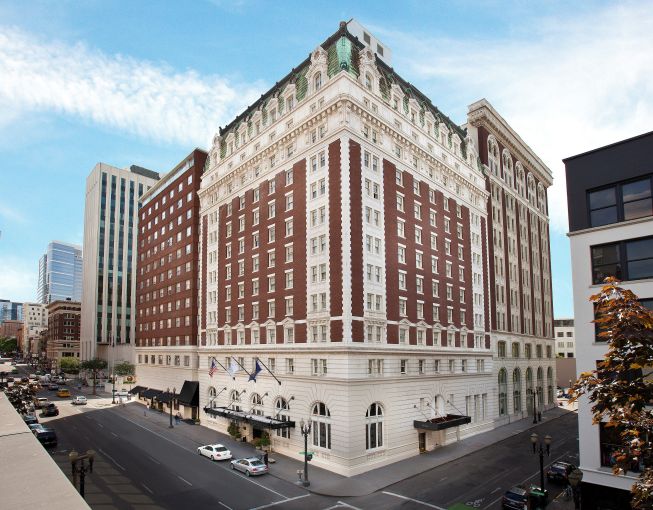 The Benson Hotel in Portland, which will soon be under the flag of Hilton's Curio Collection. Photo: HSF

The loan will refinance existing debt on the landmarked asset and help fund a conversion that will see it go under the flag of Hilton’s Curio Collection, which will allow it to benefit from the Hilton’s reach and promotional and loyalty programs while maintaining its name.

The conversion work, which will include renovations to the common areas, should wrap up in the fourth quarter of this year, according to HSF.

“The Benson Hotel is an iconic hotel and we are excited for the opportunity to add to a historical experience that guests have been visiting for over 100 years,” HSF President Mike Jaynes said. “We are thrilled to be a part of the continued history and reactivation of this celebrated and top-ranking hotel in Portland, and believe it will flourish with the addition of the Hilton Curio Collection loyalty program.”

JF Capital Advisors Founder and CEO Jonathan Falik advised the borrower in the negotiation of the loan and also in securing the branding.

“The Benson is a unique hotel with tremendous history and character,” Falik said. “[HSF] has provided a flexible and highly tailored solution for the growth, rebranding, and repositioning of the hotel.”

Built in 1912, the 13-story property was expanded to an adjacent lot in 1959 to include an additional 175 rooms. Now, the full-service hospitality asset sports 287 rooms, 57 of which are suites, as well as two restaurants, a bar and lounge, a fitness center, a business center, and about 18,000 square feet of indoor meeting and event space that is split among 18 rooms, including two ballrooms.

Coast’s conversion work as part of this rebranding will touch the meeting space, as well as the lobby and the asset’s food and beverage offerings, HSF said.

“We are excited to position this Portland landmark as one of the remarkable luxury hotels that make up the Hilton Curio Collection,” said Douglas Rigoni, president and CEO of Seattle-based Coast Hospitality, which has owned the hotel for 30 years. “[We share] the Hilton philosophy of delivering exceptional guest experiences, creating meaningful opportunities for our team members, and making a positive impact in our communities.”

The Benson is one of the oldest and most widely recognized hotels in Portland, and its location puts it within the heart of the city, not far from a deluge of shopping and bars and restaurants, as well as a variety of attractions, like the Portland Japanese Garden and the Oregon Zoo.

The hotel is also right across the Willamette River from the Moda Center, a multipurpose arena and the home of the National Basketball Association‘s Portland Trail Blazers.