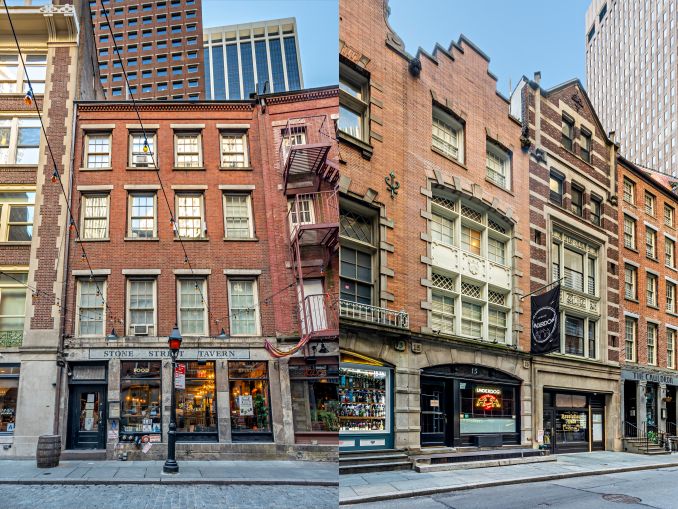 Three historic retail-and-apartment buildings on Stone Street in the Financial District have traded for $16 million, according to commercial brokers at Douglas Elliman.

Goldman Properties put the assemblage on the market for $20 million in November 2020, when the pandemic was still in full swing and Manhattan retail was at a low ebb. Now they have sold below their asking price to separate buyers.

The  other two buildings at 53-55 Stone Street sold for $10.1 million to Davean Holdings. Those structures span 14,690 square feet and hold two bars — Underdog and Revolution — along with seven free-market apartments. Davean also owns nearby properties at 6 Stone Street — home to Murphy’s Tavern — and 126 Pearl Street.

All three Greek Revival properties date to the 1830s and are landmarked as part of the Stone Street Historic District. The buildings were previously owned by Tony Goldman, the developer credited with transforming SoHo, whose family put them up for sale, Real Estate Weekly reported. Goldman died in 2012.

Marc Palermo and Louis Puopolo of Douglas Elliman represented the seller in both transactions, and their colleague Hillel Horovitz represented Davean in their purchase. Downs did not use a broker. Davean did not immediately return a request for comment, and Downs could not be reached.

“I had previously lived in each of these properties and was fortunate to participate in legendary developer Tony Goldman’s vision for the revitalization of this magnificent neighborhood and historic street,” Palermo said in a statement. “With one of the purchasers being the restaurant proprietor at the location and the other already invested on the street, I am very happy knowing that they are both committed to the continued success of Stone Street.”