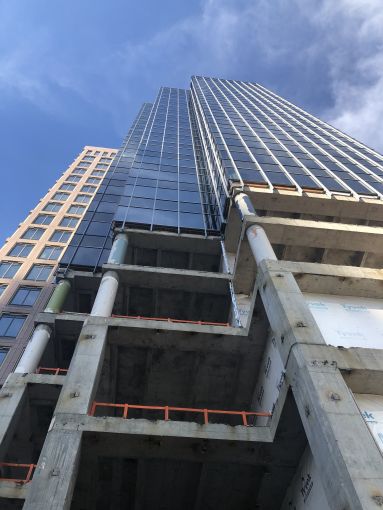 A view of Campanile Plaza from its new base, which is still under construction. Photo: Dornin Investment Group

Laguna Beach-based Dornin Investment Group has acquired a $185.6 million non-performing loan secured by Dewberry Group’s Campanile Plaza, a roughly 450,000-square-foot office tower in Midtown Atlanta, according to information from JLL, which advised on the sale of the note.

The five-year, floating-rate loan was originated by H.I.G. Realty Partners and Square Mile Capital Management at the start of 2020 — ahead of the pandemic — to renovate and expand the tower at 1155 Peachtree Street NE, which had once served as the corporate headquarters of telecommunications firm BellSouth.

JLL Capital Markets advised in Dornin’s acquisition and capitalization of the loan note, which brought the buyer’s pool of non-performing loan purchases over the last four months to $330 million. JLL’s Kevin MacKenzie and John Marshall were the advisors.

“We see a lot of inefficiency in the distressed debt space, which most institutions don’t believe exists today,” Dornin founder and CEO Chris Dornin said. “We’ve found substantial demand from lenders who would like a clean resolution to non-performing loans that have clouded their books for over a year. Our current pipeline and capital will allow us to acquire $2 billion to $3 billion in note acquisitions by the end of 2022.”

Dewberry bought the 21-story Campanile Plaza — which first opened in 1987 — in 2010. The firm had first begun efforts to renovate and expand the asset a few months prior to the pandemic, only to see that work stall.

In March, it was reported that Dewberry had informed heads of the Midtown Alliance, a non-profit community coalition, that it had plans to kickstart the stalled construction plans within the next month. JLL said in its announcement of the deal on Tuesday that the building is in the “middle” of a “substantial” renovation.

Dornin has long been a player in buying non-performing, distressed debt. In May, it scooped up a $195.5 million loan secured by a portfolio of 18 properties — a variety of mixed-use, residential, office, lodging, retail and vacant land — located throughout Los Angeles, San Bernardino and Orange counties in California, according to an announcement from the company.