A Newark Day: Inside the Brick City’s Burgeoning Development Boom 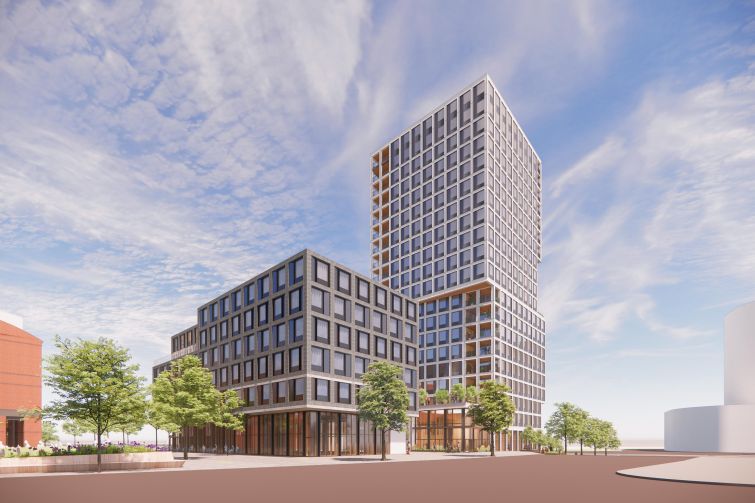 L+M Development Partners is building 350 rental apartments—20 percent of which will be affordable—and 15 home ownership units on the campus of the New Jersey Performing Arts Center. Rendering: SOM

The past 18 months haven’t been kind to Newark, which lost more than 1,000 residents to the coronavirus, experienced flooding in September during Hurricane Ida, and saw foot traffic downtown slow to a trickle as commuting office workers and students stayed in the suburbs. But New Jersey’s largest city is slowly returning to normal, and its nascent revitalization is continuing with a slew of large residential projects — most with affordable housing — inching forward in downtown and outlying wards.

There are other bright spots, too. The city now boasts a population of 311,000, up from 277,000 in 2010 and 274,000 in 2000. Many parts of the city that hadn’t seen population growth in decades have added thousands of new residents. The growing stock of new apartments downtown attracts a combination of locals and transplants from more expensive areas, including nearby suburban towns, New York City, Jersey City and Hoboken.

Of course, the city still struggles with huge, systemic issues.

More than a quarter of its population lives below the federal poverty line, and the unemployment rate currently sits at 12 percent, which is more than double what it was pre-pandemic. The Brick City is also pockmarked by some 2,000 vacant and abandoned properties, which led to the creation of a citywide land bank earlier this year, in an effort to sell off more empty land. And Newark has slowly recovered from a 2016 lead contamination crisis that affected drinking water for tens of thousands of residents and forced city officials to replace 23,000 lead water lines.

However, the city seems to be turning a corner. For example, the struggles of the pandemic helped encourage a little retail innovation. 3,500 homes arts and crafts markets have become a regular feature downtown and in Branch Brook Park, a large public park in Newark’s North Ward.

“We had 50 vendors say they wanted to come last Saturday in Branch Brook Park,” said Linda Morgan, an executive vice president at real estate firm RBH Group, who helped organize the event, Branch Brook Park Fest. “It was an amazing experience. We never had these pop-up markets that emerged during COVID. There’s a huge demand for people who make products at home to sell their stuff, but with COVID, people can’t afford retail leases.”

She pointed out that with few office commuters downtown for the past 18 months, “a lot of the retail got hit hard during COVID and hasn’t reopened.”

Siree Morris, a Newark native who runs a small development firm, MCI Property Management and Construction, saw the pandemic as an opportunity for a retail side project. He and his wife, Ayana Stafford-Morris, decided to launch a drive-in movie theater — Newark’s first since the 1980s — on the site of the former Newark Bears baseball stadium last year. They moved the theater, Newark Moonlight Cinema, to a new location at 220 Orange Street over the summer.

It screens a mix of new releases and classics — with a focus on Black directors and actors — and hosts a regular night market for local vendors to sell their wares. Morris also put his construction know-how to work and built the screen and concession stands out of shipping containers.

“We’re very proud we were able to do it in our hometown of Newark,” said Morris. “There’s no other drive-in movie theaters within an hour’s drive.”

When the couple launched the theater last summer, they had originally planned for it to be temporary.

“Thirty thousand people visited in 4 1/2 months, so we decided we gotta do it. We repositioned ourselves to find some land and we have a permanent location right now.”

The current site, he explained, was formerly home to Baxter Terrace, a derelict public housing project that was torn down in 2012. Although 90 affordable apartments were constructed on part of the lot, a large swath of the property at Orange and Nesbitt streets had been vacant.

Morris is also working on a number of new construction projects. At 41-47 Astor Street, on the block where he grew up, Morris is developing a five-story, 20-unit building named for his late brother, Michael. The development will include laundry rooms, a terrace, family rooms, an elevator and parking.

And, over in the West Ward, he purchased six vacant lots from the city of Newark to construct two buildings, consisting of 33 and 36 units, at 528 and 538 South 16th Street. The project, dubbed West Side Village, “will cater to families and single moms, and have all of the amenities of some of the nicer buildings here in the city for a more affordable price.”

Both projects will include affordable housing, with at least 20 percent of their units renting at 80 percent of the city’s area median income (AMI), or $85,920 for a family of four.

Finally, Morris is realizing a longtime dream of building a development out of shipping containers at 393 Halsey Street, near Downtown Newark. The three-family project will include two- and three-bedroom condos of about 1,200 square feet each for families making 80 percent AMI or less. MCI recently began site work for the project, which will consist of 18 containers sourced from the nearby Port Newark Container Terminal.

A few blocks from Morris’ shipping container building is Teachers Village, which was one of the first new construction projects to rise in Downtown Newark in half a century. Ron Beit, CEO of RBH Group, bought up 77 lots near the Prudential Center in 2007, and then spent several years planning the project with architect Richard Meier. RBH broke ground on the eight-building, 400,000-square-foot project in 2012 and completed it in 2017.

The complex includes three charter schools, a day care, 203 apartments (20 percent of which are affordable for people making up to 80 percent AMI) and 65,000 square feet of retail space. Seventy percent of the apartments are occupied by teachers, who receive a 7 to 15 percent discount on rent.

RBH also recently completed 212 Rome Street in the Ironbound neighborhood, which is occupied by the world’s largest aeroponic farm. AeroFarms, which grows its produce without soil or pesticides, sells dozens of varieties of greens to large supermarket chains like ShopRite and Whole Foods.

Last fall, the firm also wrapped up construction on the Honors Living-Learning Community at Rutgers University-Newark, a 400-bed dormitory located on Washington Street between Linden and Halsey streets.

And, earlier this month, the local planning board greenlighted RBH’s “Four Corners Millennium Project,” which includes two 14-story rental buildings with 470 units. One 244-unit building will rise behind the facade of the old Paramount Theater at 193 Market Street, and a second building will include 226 apartments at 101 Market Street. The facade of the landmarked theater will be restored, while the flood-damaged interior will be renovated into a performing arts venue, according to RBH Group’s Morgan. Twenty percent of the apartments will rent to families earning up to 60 percent AMI, or $64,440 for a family of four. Construction is expected to begin next year and finish in 2023.

“I feel that the future for Newark is bright,” said Morgan. “The challenge has always been in getting the financing to do projects. I’m glad that our New Jersey Economic Development Authority has come up with new programs to encourage urban development, like the Aspire Program, which helps create incentives for developers to build in distressed areas. There really is an excellent opportunity to develop in Newark, because it’s so close to New York City and there’s a tremendous transportation network here.”

Now, the company is turning a former high-rise parking garage at 155 Washington Street — about a block from Prudential’s Newark headquarters — into a high-end Urby rental building with 249 apartments. The ground-floor retail will include an Urby cafe and a Rutgers admissions office. The building is expected to be complete in June of 2022.

About a mile west of Urby, L+M is getting ready to start construction on a 77-unit affordable building at 4-22 Littleton Avenue, on the site of a parking lot at the Georgia King Village apartment complex. The development, which L+M is building in partnership with nearby University Hospital, will include an 8,000-square-foot clinic on the ground floor.

L+M is also working on the planning and design process for a large, mixed-use development on the campus of the New Jersey Performing Arts Center. The $150 million project will include 350 rental apartments — 20 percent of which will be affordable — along with 15 condos and townhomes.

“There’s often been this story about Newark being on the edge of a big wave of development happening,” said Chapin. “And nobody predicted COVID and the impacts of the pandemic in a downtown that’s so dependent on office workers. But now, schools are open and the office population is back on the street. It feels like the Newark of two summers ago.”

In addition, former New York City Deputy Mayor Alicia Glen is co-developing two projects in Newark with L+M via her real estate firm, MSquared. The first is the Georgia King Village project — which includes another female-owned development firm, TypeAProjects — and the other is a planned 10-story, 71-unit residential building at 31-39 Central Avenue, by the Rutgers University-Newark campus. Dubbed Halsey Central, the project is expected to be 50 percent market-rate and 50 percent affordable.

“At Halsey Central, we’re trying to shift the development paradigm,” said Glen. “The 50/50 [split] is symbolically important. If you’re talking about equitable growth, you have to look at things differently. Can Newark come back in a way that’s different from other cities? Can it be a place that’s a model for more truly mixed-income projects?”

Ultimately, many local developers feel that the city is ripe for opportunity, both because of its excellent transportation connections to New York City, its airport and its pro-development mayor, Ras Baraka. His administration created or preserved 3,500 affordable homes between 2015 and 2020, according to a recent press release, and hopes to build or preserve another 3,000 units of housing by 2026. The city is even working on its own 100 percent affordable development downtown — a 16-story, 66-unit building known as Kawaida Towers, with developers Omni America, Mid-Atlantic Alliance and National Action Network.

“We have an administration that understands the power that real estate has from a wealth creation and economic standpoint,” said MCI’s Morris. “They are here to help the owners and developers of this city. During the pandemic, when people were losing their houses [and] renters weren’t able to pay their rent, Newark was one of the cities that put in renter assistance programs so we can all weather the storm together.”

He added that Newark has many of the attributes of more prosperous cities.

“If we look at thriving cities — they’ve got an airport, a seaport, they’re along major train lines,” Morris explained. “We’re right next door to New York City, which is a big draw around the country and the world. I think it’s a huge market; once we get past this market correction, home values will increase even more.”