The property used to be a Gibson guitar manufacturing facility 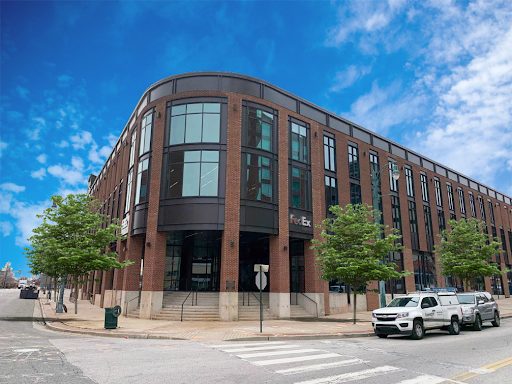 A view of the front of FedEx Logistics' new headquarters in Downtown Memphis. Photo: SomeraRoad

“This was a terrific asset to finance given the credit strength of the tenant, its long-term lease, and FedEx’s commitment to the Memphis market,” William Chen, a director within Natixis corporate and investment banking’s real estate and hospitality finance division, told CO. “SomeraRoad really hit a home run in their turnaround play, and [we are] pleased to have delivered a full debt-stack solution for the client.”

SomeraRoad, which specializes in identifying and executing redevelopment plays on distressed real estate in U.S. secondary markets, acquired the 140,000-square-foot guitar manufacturing facility in December 2017, just ahead of Gibson’s bankruptcy; private equity giant KKR, then one of Gibson’s largest creditors, eventually took control of the guitar maker in 2018, amid the bankruptcy unraveling.

The work to reposition it included teaming with local builders and designers to reimagine the property, expanding it to nearly 200,000 square feet and making it an office centerpiece in the heart of the city’s downtown. SomeraRoad had tapped LRK (Looney Ricks Kiss) to handle the project’s architecture and Grinder Taber & Grinder as the general contractor.

“This project exemplifies everything we are about,” SomeraRoad founder and Principal Ian Ross said. “[It was a] distressed, opportunistic, off-market transaction in a growing secondary market, coupled with a brilliant adaptive-reuse business plan that brought a marquee urban core asset into its highest and best use, urbanizing Memphis’ downtown with the tenancy of its crown jewel company.”

Located at 145 Lt. George W. Lee Avenue, the property sits across the street from FedEx Forum, a multi-purpose arena and home of the National Basketball Association’s Memphis Grizzlies and the University of Memphis’ men’s basketball team. FedEx’s new office is also a block away from Beale Street, one of the city’s main attractions.

Prior to it being repositioned, SomeraRoad’s acquisition included the facility and showroom and a nearby 350-space parking lot, Ross previously told CO in 2019. The distressed asset was part of a larger $32 million deal that included Gibson real estate in Nashville as well.

SomeraRoad and its partners explored other uses for the Gibson building before the office repositioning for FedEx became a reality, including grocery-anchored retail and even a brewery, according to 2017 information from Memphis’ Center City Revenue Finance Corporation.

Several months after purchasing the site, Ross and his local partners, Billy and his son Benjamin Orgel, were introduced to then-FedEx Logistics President and CEO Richard Smith, and the idea for the new office was sparked.

“Strategically, it made a lot of sense to me,” Smith told CO in 2019. (Smith is a Memphis native and son of billionaire FedEx founder Fred Smith.) “It was kind of bringing the mountain to Muhammad, so to speak, in terms of where the talent is, so I was very interested in this.”

When the project was officially announced in early 2019, it received support from Tennessee Gov. Bill Lee, who emphasized the importance of the project for the city and the county and called FedEx “a true Tennessee success story.”

“This project was also about forging great relationships with the city of Memphis, FedEx, and our local partners, the Orgel Family, amongst others,” Ross said. “Without the help of these incredible folks, none of this would have been possible.”