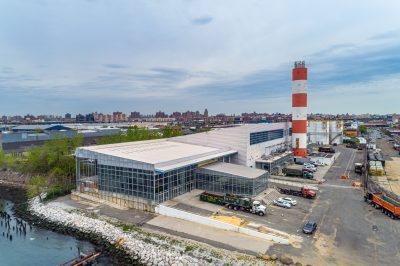 The Bronx's 1110 Oak Point Avenue was one of the largest sales of the past six months. Photo: Pinnacle Realty

Thanks to the rise in e-commerce, the demand for warehouses in New York City with highway access, parking lots, and high ceilings has caused property premiums to soar, according to a new report shared exclusively with Commercial Observer.

A recent report published by AEBOV Industrial Real Estate Brokerage has revealed such trends from the past six months, pointing to the needs of warehouses sweeping up undeveloped lots in the outer boroughs.

“Certainly, the e-commerce boom has put the spotlight more on warehouse and distribution properties versus manufacturing or cold storage,” Daniel Tropp, president and founder of AEBOV, told CO.

That spotlight directly correlates to ceiling heights, as properties above the 20-foot benchmark have sold for $482 per square foot — a 16 percent cost increase compared to properties with lower ceilings.

But the needs of warehouses have exceeded the parameters of the buildings themselves, as highway access has become a major plus in adding to a property’s value. Because warehouses require a means of distributing their products, locations within a mile from highways have sold for 19 percent more than those further away, while properties on streets wider than 100 feet have gone for 83 percent more than those on narrower streets.

Thanks to the pandemic-induced hesitation over public transportation, properties with parking lots have also shown a similar upward trajectory. Investors have become increasingly preoccupied with allocating undeveloped land to parking, so buildings with less than 50 percent lot coverage have sold at $829 per square foot, surpassing the overall average of $458 per square foot in the second half of this year by 81 percent.

In total industrial property sales, Brooklyn may have outpaced the outer boroughs with 19 of this year’s 39 transactions, but the Bronx topped the overall charts, amassing both the highest dollar volume and the average cost per square foot.

Two of the largest sales so far this year — 1080 Leggett Avenue and 1110 Oak Point Avenue — were headquartered in the Bronx, while the third — Queens’ 182-20 Liberty Avenue — rounded off the top trio.

“The second half of any year is almost always more transactional than the first half,” he said.