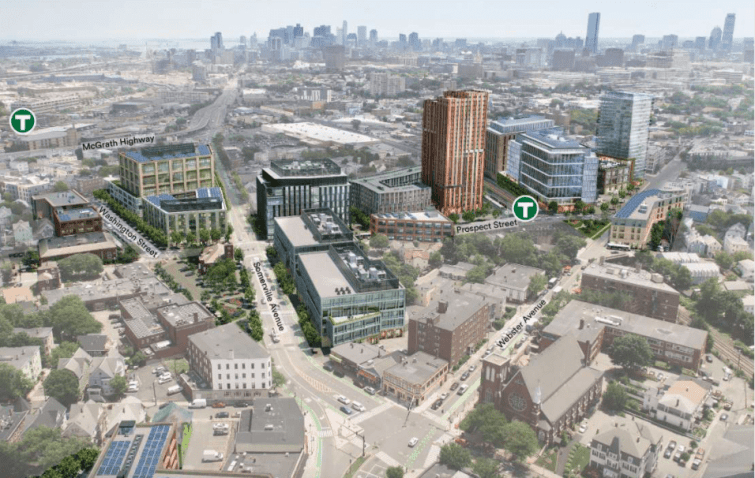 A rendering of the future USQ in Somerville, Mass., with Boston's skyline looming in the background. US2

A project that includes up to 1.2 million square feet of dedicated lab and life sciences space in Somerville, Mass. — enough to crib some of the luster that the industry has added to neighboring Cambridge and Boston — is slated to officially break ground on July 21.

The 2.4-million-square-foot, 15-acre USQ project in Somerville’s Union Square neighborhood has been years in the making. The City of Somerville selected Union Square Station Associates (US2) — a partnership of RAS Development, Magellan Development, Cypress Equity Investments and USAA Real Estate — as the master developer in 2014 for a plan designed to revitalize the neighborhood. Their plan is also slated to include some 1,000 apartments and 140,000 square feet of ground-floor retail, according to the USQ website. All of this space, too, will open near new and long-planned light rail stops.

The intervening seven years have seen the developers amass approvals from boards and agencies, as well as financing. The last piece of the latter fell into place in February, with $239 million in construction financing from Bank OZK.

The first parts of USQ are expected to open in winter 2022, and the July 21 groundbreaking for 10 Prospect Street will be the first part of the project to officially start. It will be 194,000 square feet of lab and research and development space. A developer representative declined to comment on leasing and other details.

The groundbreaking further solidifies the Boston area’s perch atop a life sciences industry that is increasingly important to commercial real estate. Various reports place the region at, or near, the top, along with San Francisco and San Diego, of life sciences markets nationally.

It’s a combination of the venture capital and government funding for R&D; access to a particularly sharp workforce, including through such universities as Harvard University and the Massachusetts Institute of Technology; and the real estate already in place to keep Boston’s life science reign.

What’s more, an aging U.S. population (with an estimated 10,000 people turning 65 every day as of 2019) in need of medicines and medical devices, as well as a coronavirus pandemic that touched off a veritable arms race for treatments and vaccines — which sped up the regulatory approval process — furthered demand that much more for the products that life sciences companies create. That has, in turn, spurred demand for space.

Aside from perhaps industrial, no other commercial real estate sector currently draws as much investor interest.

In the Boston area, where VC funding for life sciences increased 156 percent annually in the first quarter of 2021, demand for real estate increased 22.1 percent in the same quarter compared with mid-year 2020, according to a June CBRE report that tracked the nation’s major life sciences markets. Vacancy in the sector stood at 2.5 percent for the more than 37.8 million square feet of life sciences space in the region, and some 5.8 million square feet-plus was under construction, including USQ.

Only the New York and San Francisco regions had tighter markets, but none claimed as much space, nor as much new construction, as Greater Boston, according to CBRE. In fact, only the San Diego area came close with more than 3.3 million square feet under construction. The Boston area also had far and away the most tenants (108) in the market for space, too.

Most of the demand is still concentrated in Boston and Cambridge. The USQ project should shift some of that shine onto Somerville, a densely packed city of 81,000 souls. Somerville is already home to other, smaller life sciences and health care hubs. USQ is on a whole other scale, though, with its 1.2 million square feet of lab and R&D space by itself greater than the total new construction sums in entire markets like Chicago, Raleigh-Durham, Seattle and Washington, D.C.

Demand for life sciences space also helped the Boston area this year edge out Manhattan as the most liquid commercial property market in the U.S. overall, according to a report from Real Capital Analytics, a real estate tracker. Manhattan has far more investors, but far less competition for space, the report said.