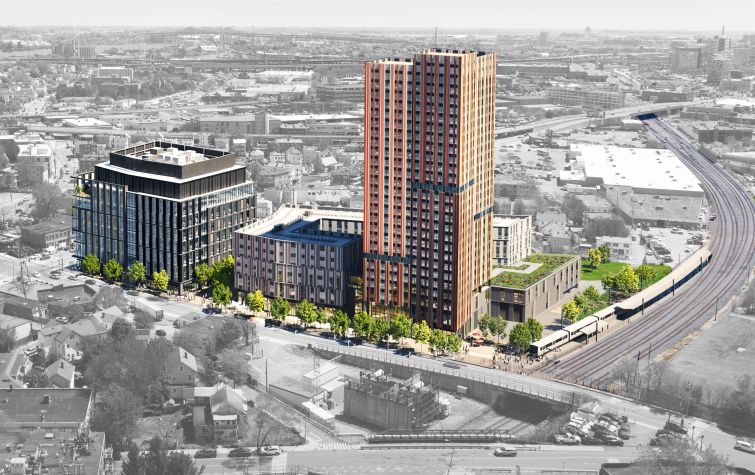 A rendering of the Union Square development. Credit: US2

The buildings, at 10 Prospect Street and 50 Prospect Street, are part of the Union Square revitalization master development: a 2.4-million-square-foot, $1 billion transit-oriented project in Somerville’s Union Square neighborhood that will include biotech, lab, office, residential and retail space.

“This marks a major milestone for the neighborhood,” Paulsrud said. “A significant amount of effort and perseverance have gone into creating a plan and design that has remained thoughtful of the urban fabric and character that Union Square has always represented for the city. It is great to see it all come together, and will be exciting to watch this best-in-class development team execute its plan.”

The borrower partnership, also known as Union Square Station Associates (US2), was selected as the City of Somerville’s master developer partner in June 2014. The transformative development, which spans 15 acres, coincides with the Massachusetts Bay Transportation Authority‘s (MBTA) Green Line Extension, a construction project to extend the light rail northwest into Somerville and Medford, also an inner suburb of Boston.

The development sits in close proximity to the Massachusetts Institute of Technology and the Kendall Square area of Boston, which holds a large concentration of the life science industry. The resulting ecosystem supports companies at every stage of growth, and the Union Square project aims to foster the next concentration of tech, biotech and life sciences companies within the greater Boston area.

“This is a tremendous beginning for the revitalization of Union Square. A new, Class A life sciences building will anchor the neighborhood and create opportunities for the next great concentration of life sciences and technology companies to flourish,” Greg Karczewski, president of US2, said. “New housing, retail opportunities and open spaces next to the new MBTA Station will make this great neighborhood even better.”

Bank OZK is no stranger to the life science space. In June 2020 — at the height of the pandemic — it originated a roughly $60 million construction loan for a 140,000-square-foot life science development, also in suburban Boston. The asset is being developed by Lincoln Property Company and MetLife Investment Management.