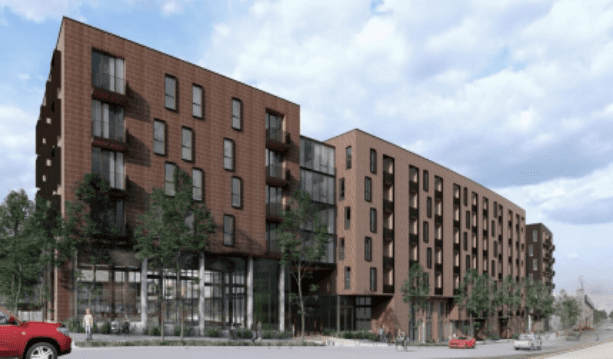 A rendering of Chartwell at Marathon. Courtesy: First Southern Mortgage

Principal Real Estate Investors, a real estate investment division under the umbrella of investment manager and life insurer Principal Financial Group, has supplied just over $63.2 million in debt to Chartwell Residential to build a luxury mixed-use development near Downtown Nashville, according to information from First Southern Mortgage, which advised in the arrangement of the debt.

The loan will facilitate the buildout of Chartwell at Marathon, a planned, 360,000-square-foot residential and retail mixed-use project at 801 12th Avenue North and 800 14th Avenue North within Marathon Village, a neighborhood created through the redevelopment of an area and its buildings that used to host old automobile manufacturer, Marathon Motor Works. The deal closed on July 9.

Stephen Brink, a managing principal out of First Southern’s Nashville office, said that the “competitive financing package offered by Principal was ideal for property ownership.”

The project — designed by David Baker Architects and Nashville-based firms Johnson Johnson Crabtree Architects and Catalyst Design Group — will sport 388 rental units and more than 4,000 square feet of ground-floor retail space. The residential units will be split across the two parcels, with 378 apartments rising at 801 12th Avenue North and 10 townhomes at 800 14th Avenue North.

The developer acquired the two sites on which the development will be erected in February for a combined $17 million, the Nashville Business Journal reported. Chartwell Residential Partner Ben Schaedle pegged the cost of the development at $112 million and had forecasted that the project would take more than a year and a half to build. Demolition work to knock down the former Union Station Brick Company building that sits on the nearly 5-acre plot will begin immediately.