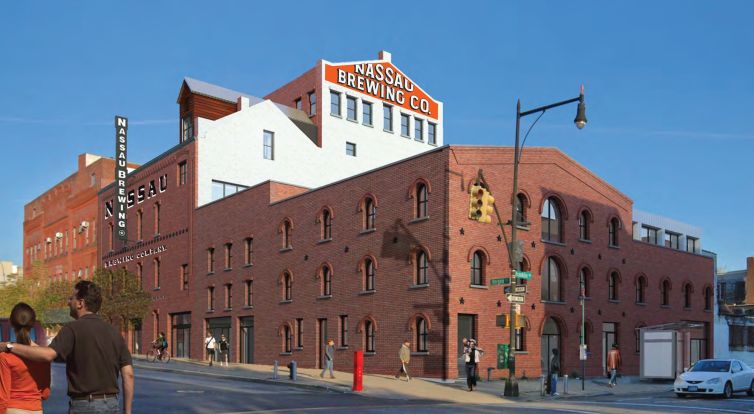 The entity tied to the redevelopment of the shuttered Nassau Brewing Company’s former home in Crown Heights, Brooklyn, has filed for bankruptcy and accused the project’s former manager of misappropriating funds, leaving the project unfinished.

Nassau Brewing Company Landlord LLC filed for bankruptcy on Friday, with between $10 to $50 million in liabilities, as the entity’s current managing partner, Churchill Real Estate Holdings, seeks to sell the property, according to court records.

Churchill also claims that it had to toss out the former manager of the project, Fabian Friedland of Crow Hill Development, “to end several years of fraud and mismanagement which has badly impacted the … development plans,” according to court records.

Friedland and a spokesperson for Churchill did not respond to requests for comment.

Crow Hill bought the former brewery at 945-949 Bergen Street — which is on the National Register of Historic Places — for $7.5 million in 2008 from CPC Resources, as Commercial Observer previously reported.

Friedland unveiled plans in 2015 to turn the 1860s building into a mixed-use complex with retail on the ground floor and apartments above it, Brownstoner reported. Crow Hill landed an $18 million loan that year for the project.

Churchill joined the project as a preferred member in 2016 when it put $5 million into the redevelopment, according to the bankruptcy filing.

Crow Hill announced it leased space to Japanese-French fusion restaurant Doma and speakeasy-style Embassy Bar in 2018, and in 2017 told Brownstoner it was near completion.

However, Churchill claims Friedland’s Crow Hill “mishandled construction funds,” leaving the redevelopment in a “state of partial completion” that “presents a myriad of health and welfare issues to the community,” according to court records.

In its bankruptcy filing, Churchill said the development stalled “due to a myriad of issues and disputes with Friedland” and that he “grossly mismanaged the project, apparently diverting millions of dollars that should have been put into the rehabilitation.”

The project’s mortgages are currently in default; it owes more than $200,000 in real estate taxes; and the entity is facing a lawsuit from one of its former restaurant tenants over a missing security deposit and first-month rent, which Friedland allegedly “diverted,” according to court documents.

Adam Stein-Sapir, a bankruptcy expert with Pioneer Funding Group, who’s not involved in the case, said that aside from Churchill prepping for a sale of the building, the bankruptcy proceedings give it a chance to find out exactly what went wrong with the project.

“[Churchill is] trying to use bankruptcy and the discovery tools available in bankruptcy to really figure out what happened to the money and where it went,” Stein-Sapir said. “I’m sure no one in the asset anticipated that the project would need more capital.”