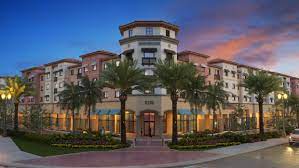 Located at 6350 Griffin Road, the six-building complex sits between the Florida Turnpike and S University Drive, totaling 781 beds and 597,205 square feet, of which 31,000 square feet is dedicated to retail. The project opened in 2019.

New York-based Madison Realty Capital is taking over the reins from Guggenheim, loaning $58 million as a part of a mortgage and $4 million as a mezzanine loan. Of the total, $8 million will go towards completing the second phase of the development, which is set to deliver a seventh, four-story building with 96 beds.

University Pointe consists of one-, two-, three- and four-bedroom units, with washers and dryers in every apartment, and offers shuttles to local universities.

Since its founding in 2004, Madison Realty Capital has completed more than $15 billion in transactions across the country and now manages approximately $6 billion in total assets, the company said. Just last week, the firm loaned $105 million for Fort Partners to purchase Miami’s Four Seasons Hotel at The Surf Club, The Real Deal reported.

Representatives for Nob Hill and Broward Student Housing could not be reached for comment.

Julia Echikson can be reached a jechikson@commercialobserver.com.