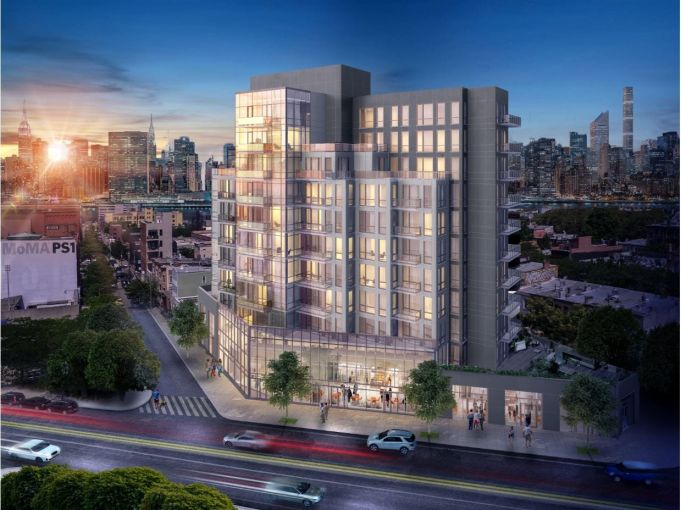 A rendering of The Prime LIC at 22-43 Jackson Avenue in Long Island City, Queens. Courtesy: Circle F Capital/ via Newmark

The 10-year, fixed-rate, commercial mortgage-backed securities (CMBS) loan will refinance the 26,000-square-foot retail condo that is partially situated on the ground floor and underneath the new 11-story development at 22-43 Jackson Avenue, which had been under construction for the last couple of years until the end of 2020.

Following in lockstep with the refinance, The Prime became a grocery-anchored, mixed-use development last month, adding a Trader Joe’s into a 10,000-square-foot section of the retail condo. It was reported in early June that the grocery chain was slated to open on June 25, underneath the 10 stories above it that house 70 residential condos.

The co-heads of Newmark’s New York-based debt and equity structured finance team, Dustin Stolly and Jordan Roeschlaub, led a team that sourced and arranged the debt financing, alongside Daniel Fromm and Adrie Moses-Bailey.

Fromm said that Ladder “immediately recognized the opportunity to finance this grocery-anchored retail condo and was able to close this transaction without any hiccups.” The retail condo features 14,600 square feet of ground-floor retail and 11,400 square feet of subterranean retail space, according to Newmark.

The property is located in the heart of Long Island City, just steps away from the Court Square subway station, which provides direct access to Manhattan and most of Queens via the 7 train, as well as Brooklyn via the G train. The Prime is also just a couple blocks from Queensboro Plaza, a central subway junction that serves other heavily trafficked train lines.

The Prime’s delivery to market comes at a time when Long Island City is seeing and expecting a relative surge in new residents, with new developments in the pipeline to support the growth — it sits across the street from G&M Realty’s ongoing project, 5Pointz, a 1.3 million-square-foot, 1,100-unit, mixed-use apartment development that’s expected to open this year.

“This location is a triumph for both Trader Joe’s and Circle F Capital. Located just one block from the 7 train, with access to Midtown in minutes and surrounded by thousands of apartment units delivered in just the last few years, this property is poised to be one of the city’s best-positioned retail assets,” Stolly said.