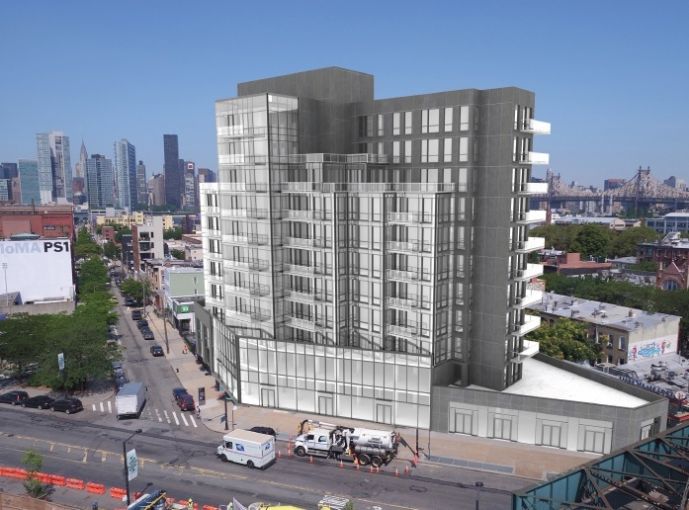 A rendering of the condo and retail project. Image: Eastern Consolidated

Circle F Capital, a family-held investment firm, has scored a $46.2 million construction loan to fund its development of a retail and condominium project in Long Island City, Queens, Commercial Observer can exclusively report.

Brookfield Real Estate Financial Partners will provide the financing for the site, at 22-43 Jackson Avenue, a few blocks from the East River waterfront near the Queens entrance to the Queens-Midtown Tunnel.

“We were delighted to assist the sponsor with this condominium development,” Eastern Consolidated’s Adam Hakim said in a statement. The building “will allow individuals the opportunity to buy an apartment in Long Island City, where nearly 80 percent of the new residential construction since 2006 has been for rental units.”

Hakim along with Eastern’s James Murad and Andrew Iadeluca brokered the financing on behalf of Circle F.

Property records show that Circle F acquired the development site in May for $23 million, with the help of bridge financing from iCross Fund, a real estate crowdfunding platform that draws investors from the U.S. and China. That initial financing has already been paid off, according to Lily Guo, the CEO of iCross.

Plans filed with the New York City Department of Buildings call for an 11-story building with 70 apartments and 13,000 square feet of retail space on the lower floors. To make way for the new project, Circle F has razed the prior structure on the lot, a vacant single-story commercial building constructed in 1964.

According to CoStar, the Museum of Modern Art leased 1,000 square feet in that building starting in 2011 adjacent to its PS1 contemporary art center at 22-25 Jackson Avenue, but a MoMA representative reached by phone could not provide information about the museum’s former use of the space.

Conflict between artists and residential development in the neighborhood reached a flash point in 2014, when developers Jerry and David Wolkoff knocked down a warehouse building known as 5Pointz that had become a celebrated public canvas for accomplished graffiti artists. The developers’ conversion of the site into rental units prompted a lawsuit from the artists whose work was destroyed.

In November, a civil jury recommended that a judge find Jerry Wolkoff culpable of breaking a federal law by destroying the graffiti.

New York YIMBY reported in June that construction of the new condos at 22-43 Jackson Avenue is slated to finish in 2020.

Brookfield and Circle F did not immediately respond to requests for comment.