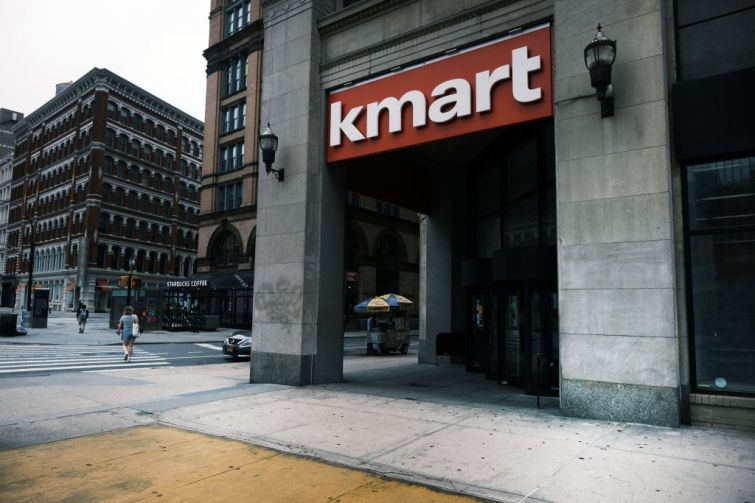 New York University Tisch School of Arts theater majors will have to find another discount store for their low-cost props now that the Astor Place Kmart turned off its blue light for good Sunday.

Shoppers and store employees were only given a two-day heads-up that all inventory at the 770 Broadway outlet would be liquidated by the end of the weekend, according to the EV Grieve blog, as bargain hunters scoured its floors for deals on whatever sundry items remained. Clothing racks and mannequins were packed up the following day, and liquidators purchased shelving and other fixtures from the building on Tuesday.

“It was a bit sudden for us and we believe it was sudden for Kmart as well. We didn’t get a very lengthy note time,” Rachel Brandon, a spokeswoman with The Village Alliance, the business improvement district for Greenwich Village, said. “One time, I ripped my pants at work and grabbed a pair of black pants there.”

Its closure wasn’t a shock to anyone who shopped there.

In January 2018, Kmart parent company Sears Holding Corp. announced it would close 64 Kmart stores nationwide and sold its Astor Place lease to Vornado Realty Trust for $46 million. Instead of closing, Kmart downsized its 300,000-square-foot store, spread over three floors, to the first floor and basement. Vornado flipped the empty floor to Facebook, which had rented office space in the 15-story building since 2014 and now occupies half the property.

Facebook is in no rush to expand its footprint. Only a quarter of its New York City offices currently have workers in them, and the tech company does not have plans to rent the building’s lower floors that housed Kmart, a Facebook spokeswoman said. Vornado declined to comment about the future of its Astor Place site.

Kmart customers mourned the loss of their bargain emporium, although some insisted the space was “definitely haunted.”

“Sad that the Astor Place Kmart is closing today,” Jason Diamond, author of “Searching for John Hughes” tweeted. “Truly one of the weirdest shopping experiences for reasons I could never quite put my finger on.”

But, Mayor Bill de Blasio was nonplussed at the loss of the mini-megastore, saying he never browsed for bric-a-brac despite attending NYU and getting his haircuts nearby.

“I wouldn’t personally read too much into that; there are lots of other good options for people,” he said Tuesday.

Once the second-largest retailer in the nation after Sears, Kmart occupied three floors of the former Wanamaker’s department store since 1996, when the company had 2,100 stores nationwide. In its late-1990s heyday, the store hosted touring pop stars, including U2, Aaron Carter and Garth Brooks, and brought in model Kathy Ireland and actress Jaclyn Smith to promote its “blue light special” marketing gimmicks.

But the retail giant struggled for much of the century as competitors — including Walmart and Target — outmaneuvered it in the suburbs, and e-commerce giants like Amazon gobbled up its market share. There were 942 Kmart stores in 2015. As of June, there were only 40. A spokesman for Kmart did not return a request for comment.

Kmart lovers can still visit the Bruckner Boulevard location or the Bay Plaza Shopping Center in the Bronx to get inexpensive bedding and back-to-school supplies. But ,The Village Alliance’s Brandon hopes another affordable retail chain sets up shop on Broadway soon.

“It definitely served a huge role in Astor Place,” Brandon said. “It was an important staple in our neighborhood for a long time and we’re sad to see them go.”