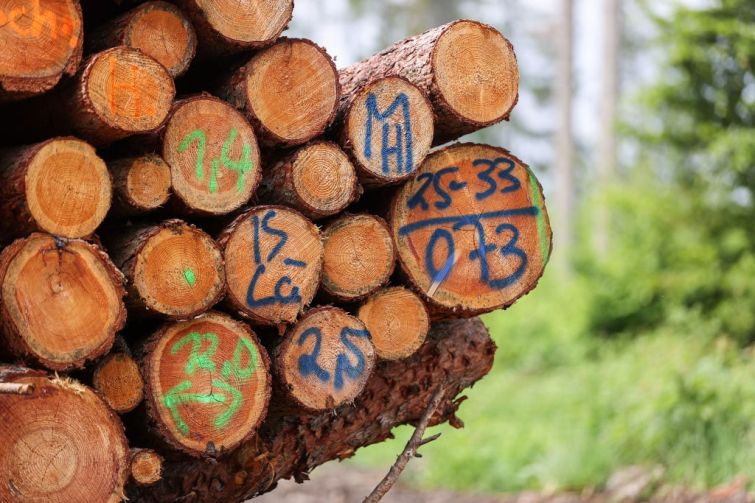 Lumber prices have shot up across Europe, America and the U.S. this spring because of pandemic sawmill closures and wildfires, putting contractors in New York and across the country in a tough position. Photo: Jan Woitas/Picture Alliance via Getty Images

When lumber prices hit a record high of $1,670 per thousand board feet on the commodities market in early May, both contractors and homebuyers began to prepare for the worst. The past two months have seen an even more pronounced fall in lumber futures, which closed at $521.40 on July 14, after declining 70 percent from their peak.

The volatility created stress for many builders, but contractors who specialize in mass timber argue that they benefited somewhat from lumber’s wild ride.

“The good part about it is that lumber pricing has never been anything that anybody paid attention to,” said Chris Evans, president of Swinerton’s Timberlab. “Every day, people are writing more articles on mass timber buildings, and on how to have more sustainable and renewable products in our buildings. It’s raising the level of awareness to society in general that wood is a viable product to use. You can use wood as interior finishes for stair systems, office building fit-out projects, you can use it to make complete structures. The rise and fall of the lumber pricing has made everyone more attuned to that.”

Inevitably, Timberlab — an arm of national contractor Swinerton that focuses on mass timber construction — has had to put some projects on hold.

“We told our clients we can just wait six months to make a purchase,” said Evans. “When we saw the pricing going up, we really felt that this was a short-term issue, and prices would fall back into alignment in due time. On the multifamily side, it certainly put projects on hold.”

Timberlab is currently working on the Ascent, a 25-story, timber-and-concrete tower in Milwaukee, Wis., that will be the tallest timber tower in North America. Their other projects include two timber residential buildings in Seattle — topping out at four and eight stories — the roof of Portland International Airport, and the University of Southern Maine’s student center.

The huge increase in lumber prices was sparked by a unique confluence of factors, including the closure of sawmills during the height of the pandemic, domestic and Canadian lumber producers losing hundreds of acres of forest to wildfires, and a surge of consumers building decks for their homes and outdoor seating areas for their businesses.

“Mills are starting to salvage lumber that had been logged and burned,” said Sam Dicke, a business representative for Timberlab. “We work with a company called Freres Lumber in Lyons, Ore., on the Portland International Airport. They lost a lot of their private forest lands in [last year’s] Beachie Creek fire. More acres burned in 10 days than in the previous 10 years.”

While lumber prices have returned to where they were in December 2020, they remain almost double what they were in January 2020, before the start of the pandemic. But, pricing is unlikely to remain inflated long term, construction industry experts argue.

“My personal opinion is that pricing will come back to a normalized level,” said Evans. “The market simply can’t sustain high prices like that for a long period of time. We think by the end of the year, it will be at a much more normal bandwidth.”

Brian Sampson, president of the New York chapter for Associated Builders and Contractors, a construction trade group, felt that costs for lumber and other raw materials would start to normalize during the first quarter of 2022.

“If we fast-forward six months from now, you may lose on the front side, because the cost went up so quickly,” said Sampson. “But, you’re going to be better on the back side with the projects you’re bidding now. When you look at the cost of construction in general, they’re all running at a pretty high rate now. By this time next year, things will have leveled out and become more predictable.”

In New York City, Sampson said that contractors have certainly been feeling the pinch from elevated lumber and steel prices.

“Incredible volatility puts a lot of stress on the contractors,” said Sampson. “A lot of our contractors have felt that pinch. They’ve had to pay for the added cost of the timber — some of that cost they can pass onto the client, some they can’t, contractually. It’s going to have an impact on the commercial side as well, especially on plywood.”

He added that residential projects, in particular, tend to rely more on timber.

The lumber price increases “had a very profound impact on construction in the city,” said Sampson. “The affordable housing market tends to be a very timber-heavy sector.”

Plus, raw material prices remain elevated across the board, with the cost of roofing shingles up 100 to 200 percent, for instance, and the cost of structural steel and copper remaining quite high. Even construction cost consultant Rider Levett Bucknall reported the highest quarterly increase in construction costs of the past 20 years in its second-quarter report released last week.

“You’re going to continue to see an escalation,” said Sampson. “Amazon and Walmart are the two organizations that are sucking up the great majority of the steel in the country. We’re not looking at a measurable decline in the cost of goods for the next three quarters, until you get into the second quarter of next year. You’re probably talking a good six to nine months.”