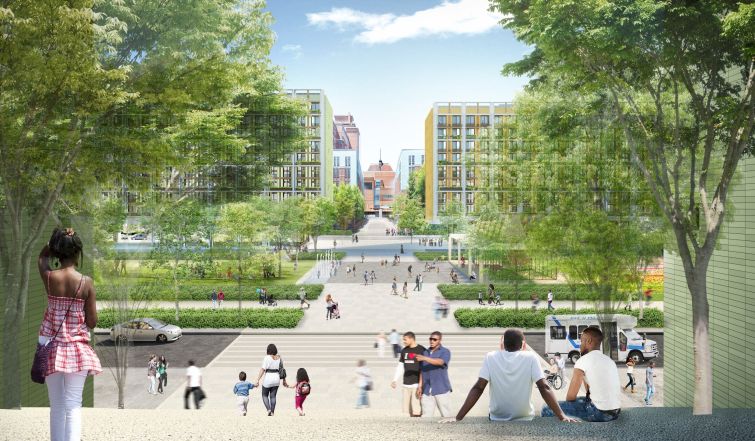 The $400 million redevelopment project, which Empire State Development announced in August, will replace two homeless shelters on the 681 Clarkson Avenue campus with 900 affordable housing units, new facilities, public green space, areas for urban farming and a basketball court, on 7.2 acres of land, according to Cuomo.

“The COVID-19 pandemic further exposed the inequalities among the state’s at-risk and in-need communities, including a fundamental need for safe and affordable housing,” Cuomo said in a statement. “We are better addressing these needs by transforming underutilized land on the Kingsboro Psychiatric Center campus into a community-oriented development that provides housing and programming to better serve those in-need.”

Douglaston heard that its group was selected a few weeks ago for the project, Arden Sokolow, an executive vice president at Douglaston, said. The developer’s construction arm, Levine Builders, will help construct the entire site and its management arm, Clinton Management, will assist on some of the properties, Sokolow added.

“We’re really grateful to Gov. Cuomo and New York state for giving us this opportunity,” Sokolow told Commercial Observer. “We’re incredibly impressed with the planning that they’ve already done in making this really thoughtful and responsive. We just hope to build on that and provide a project that the community feels enhances their already strong community in every way.”

Almat Urban, Breaking Ground, Brooklyn Community Services, the Center for Urban Community Services, Jobe Development and the Velez Organization are all part of the development team coordinating and constructing the complex. The design team includes the David Adjaye-led Adjaye Associates, the architect for the project, and Harlem-based Studio Zewde.

The proposal process was competitive, but this group won out due to their design skills and diverse team, Sokolow said.

“We had an amazing design, led by our architect David Adjaye,” Sokolow said. “He’s a world-renowned architect who’s best known in America for building the [National Museum of African American History and Culture at the Smithsonian] … The other really compelling part of our proposal was the strength and the diversity of our team; between having minority women-owned developers as a huge part of the development team [to] having a really strong set of nonprofits.”

The state plans to get construction started within 18 months to two years, Sokolow said. Douglaston and the other developers will begin seeking community feedback as part of the project’s process.