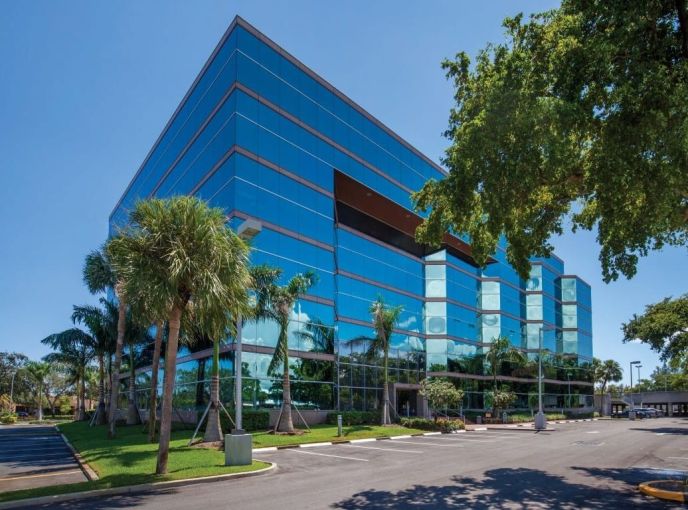 The owner of an office complex near Interstate 95 in Deerfield Beach, Fla., is planning a mixed-use redevelopment of the property with 360 apartments.

Final approval is pending county and state reviews of the land-use change. It would allow Grover Corlew to build an eight-story, 360-unit apartment building; a 7.5-level parking garage; and as much as 70,000 square feet of new office space at the 16.5-acre complex.

Grover Corlew is now conducting a $1 million renovation of the lobby in a six-story office building at Hillsboro Center, while planning to raze a two-story office building there. “We are going to be removing it and replacing it with the residential building,” Dennis Mele, an attorney for the real estate firm, told Deerfield Beach commissioners at their meeting Tuesday night.

Grover Corlew is pursuing approval to build as much as 70,000 square feet of new office space, but the first phase of the firm’s planned mixed-use redevelopment of Hillsboro Center would be the multifamily residential component, according to a conceptual site plan. The new office space would be in two new office buildings, Mele said.

Hillsboro Center was 88.3 percent leased when Grover Corlew acquired the office complex for about $150 per square foot in 2019, according to a press release issued at the time. A spokeswoman for Grover Corlew said Tuesday that she did not have the current occupancy rate for Hillsboro Center.

The residential makeover of Hillsboro Center is one of several major real estate investments in the suburban area surrounding its location next to I-95 and close to the Dixie Highway flyover bridge, which connects Deerfield Beach and nearby Boca Raton.

Just west of Hillsboro Center, for example, Ram Realty Advisors developed the 226-unit Indigo Gardens apartment complex (now known as Cortland Deerfield Station) and sold the property to Atlanta-based Cortland for $70 million in June. Another nearby property along I-95 is the headquarters of Toyota distributor JM Family Enterprises, which launched a three-year, $150 million renovation of its corporate campus in 2018.

Update: This story has been updated with the correct names of the Grover Corlew principals.