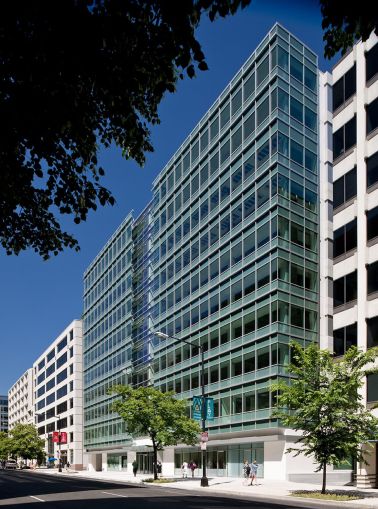 The Liberty Building. Photo: By Maxwell-Mackenzie

ProPharma Group Holdings has signed a 10,000-square-foot lease at The Liberty Building, a 176,350-square-foot office building in Washington, D.C., with Monument Realty and Ares Management.

The Overland Park, Kan.-based company, which provides regulatory, compliance and medical information services, signed for 11 years and will occupy the sixth floor when it moves in later this year.

Additionally, New Skies Satellites Inc., which provides global content connectivity solutions and satellite telecommunications, re-upped its lease for 17,000 square feet on the top floor of the building for the next 11 years.

Located at 1129 20th Street NW, the 10-story building was originally constructed in 1969 and renovated in 2009 to meet LEED Gold-certified standards.

Monument Realty acquired the property last December and is planning on a substantial interior renovation later this year. Monument and Ares have partnered with Avison Young’s Eli Barnes, Will Stern and Lauryn Harris to handle leasing at the property.

“Adding ProPhrama Group and renewing New Skies Satellites attests to our gut feeling that the office market would return to D.C.,” Michael Darby, Monument Realty’s CEO and founder, told Commercial Observer. “We acquired The Liberty Building in the middle of a pandemic when many developers were stirring away from office acquisitions; we are thrilled to have acquired such an asset and that we were able to secure two global tenants.”

The Liberty Building is situated in the middle of D.C.’s central business district, making it accessible by Metro from around the region.