This chapter from the new book "The Cult of We" exposes the roots of that mendacity. 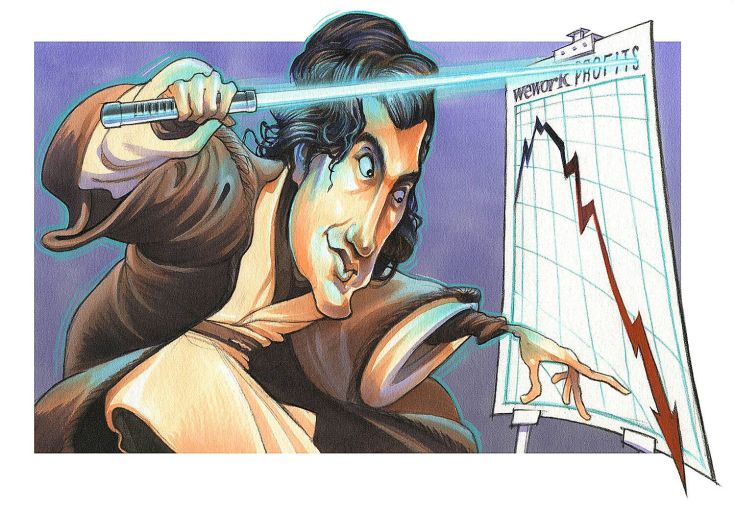 Adam Neumann grew up in a kibbutz in Israel and honed his Jedi-like salesmanship skills at a baby-clothes startup. Illustration: Bruce MacPherson

Adam Neumann believed he would be the man to reinvent baby clothes.

It was 2006, and he was twenty-seven years old. Neumann was already running his own fledgling business that aspired to mass-produce pants and onesies with built-in knee pads for crawling babies. He named it Krawlers. Despite his sincere belief in the brilliance of his concept, Neumann was still hunting for ways to get the business moving, let alone to turn a profit. He flew to China to meet with suppliers. He pushed his product on baby retailers.

Neumann had arrived in New York from Israel in the fall of 2001, landing in a city reeling from the 9/11 terrorist attacks. Yet, in times of boom and bust alike, New York always beckoned dreamers like Neumann. His reason for the move, he told his friends, was simple. He wanted to get rich. New York was “where opportunity happens.”

He moved in with his younger sister, Adi, and lost no time making connections. Adi, a model who appeared on the covers of magazines including international editions of Elle, Vogue, and Cosmopolitan, brought in plenty of money to support a flashy lifestyle. The two shared an apartment, which doubled as Adam’s office, on the fifteenth floor of a building in Tribeca that attracted a gregarious crowd. Twenty-somethings flitted in and out of one another’s apartments or socialized on the roof.

While Neumann had flirted with modeling himself—he had a distinctive look, lanky with long, flowing dark brown hair and a face marked by high, rounded cheekbones—he opted to pursue dreams of another sort.

Neumann had launched Krawlers while a student at Baruch, a public college in Manhattan known for its business program. The budding entrepreneur had tested out a string of business ideas, including a collapsible high heel, before eventually landing on padded infant clothes. Friends say he got the idea by seeing a similar product in Israel. He took to Krawlers with his trademark intensity, dropping out of Baruch to work on it full-time. He talked about how big the company would become—how they’d be selling millions of dollars of Krawlers clothes a year. He borrowed money from his sister, raised more from a wealthy hedge fund manager she was dating, and invested $100,000 he’d received from his grandmother.

Neumann knew little about children. He was young and single, and his time was dominated by working, drinking with friends, chain-smoking cigarettes, and churning through dates with different women. And the business logic of Krawlers had obvious holes: typically babies crawl for only a period of months.

Yet Neumann proved to be a gifted salesman, particularly when face-to-face with a potential buyer.

At trade shows where many of the clothes were sold, Neumann was a magnet for the small-business owners. His dramatic appearance, his booming voice with its emollient accent, and his vibrant energy stood out amid rows of infant clothing purveyors—so much so that a small crowd often huddled around him. He conjured a world in which a baby couldn’t be happy without built-in kneepads. He’d walk potential buyers through the experience of being a parent and having children crawl. Your child will love you more because of these clothes, he’d tell them, with a smile. The company’s slogan became “Just because they don’t tell you, doesn’t mean they don’t hurt.”

At a trade show in Manhattan’s Javits Center around 2006, Daniel Rozengurtel spotted Neumann’s head above a swarm of people at the Krawlers booth. Rozengurtel and his wife had started an e-commerce website called Spiffy Baby. It didn’t take long for Neumann to convince the couple, who had recently had a baby, that the kneepad-lined clothes were something they’d need for their child—as would their customers. Within a single conversation, Neumann struck Rozengurtel as amazing. He put in an order.

On a good day, Neumann sold thousands of dollars of baby clothes at a time. He bounced off the walls with energy and ideas, constantly hustling and calling prospective investors and retailers. He struggled to sit still for long periods; he constantly paced around his office as he talked on the phone. He loved the negotiating, the banter, and the sport of it all. He would even haggle with bewildered department store salespeople.

Neumann wasn’t rich yet, but he was having fun and learning the ropes of deal making. And his twenties in New York, in all their kinetic glory, were stable—at least when compared with what came before them.

Neumann was born in April 1979 in the southern Israeli city of Be’er Sheva’ to a pair of medical students at Ben-Gurion University. He and his sister relocated each time his parents switched hospitals as part of their training. His parents divorced when Adam was seven, and he and Adi went with their mother, Avivit, to the United States, where she secured an oncology fellowship in Indianapolis. Neumann’s childhood, by his own account, was “shitty.” A bright child, he suffered from severe dyslexia, making reading difficult. His mother, who would go on to be one of Israel’s top oncologists, was often exhausted from her work ministering to cancer patients. She would often scream at him, he later confided to friends. She had a habit of spending well beyond her means, which would periodically leave the family short on money.

After two years in Indianapolis, Neumann and his family returned to Israel, where his father had remained. The siblings lived with Avivit. She lined up a job at a hospital in western Israel, as well as a part-time gig on a kibbutz—one of numerous socialist-inspired communities scattered throughout the country, remnants of a utopian movement started decades earlier. Because of her work as a doctor there, the Neumanns got housing within the kibbutz’s gates.

The kibbutz, Nir Am, had roughly six hundred residents and sat ten miles inland from the Mediterranean Sea, just on the northern edge of the Negev Desert. The ethos of the kibbutz movement was one of sharing and egalitarianism. For decades after its founding in 1943, Nir Am residents supported the kibbutz by picking grapefruits and potatoes in the fields or working in the on-site cutlery factory, a low-tech maker of forks, knives, and spoons. Salaries were equal. Cars were shared—with driving hours controlled by a sign-up sheet. In Nir Am’s brutalist concrete dining hall, families would join together to eat meals of cereal, chicken, or falafel.

Neumann, then eleven, struggled to make friends. The children in Nir Am had grown up in the community and knew one another like siblings. Neumann and his mom and sister, on the other hand, were outsiders: they were simply renting space there. But Neumann eventually endeared himself to the others. He was loud and fun and invited peers over to his room, where he showed off American trinkets, like his Nintendo video-game system. Outside, they’d play basketball, or sometimes with a baseball Neumann brought from America. As years passed, his friends became the center of his community; he slept in the house designated for teenagers, where he had a sizable room of his own.

Neumann’s time in Nir Am coincided with sweeping changes in the kibbutz structure. Throughout Israel, the idealistic dreams of the kibbutz had begun to falter. These communities were designed to be self-sustaining, but decades into their existence they relied heavily on government subsidies. The vision wasn’t working, and as finances deteriorated, Nir Am began to change—to introduce capitalistic reforms to the troubled socialist structures. More residents took jobs outside the kibbutz, while all residents began to pay for meals and air-conditioning; food waste and electricity use plunged. (Later the cafeteria would shut down and be converted into a co-working space.)

Neumann loved the sense of community at Nir Am and the close bonds he made, but the economic egalitarian spirit didn’t rub off on him. He told friends he wanted to leave and make millions of dollars. He would later carp about the inherent unfairness of kibbutz life. Slackers and hard workers received the same pay, he’d say.

In Israel, military service is compulsory, a rite of passage during which men and women, usually serving in their late teens and early twenties, often forge lifelong friendships and vast peer networks. Neumann, aiming high, scored a spot in the naval academy, an elite placement within the Israel Defense Forces, second in prestige only to fighter pilot training. The position required seven years of service rather than the mandatory three. The navy screened cadets with rigorous tests, seeking candidates who could combine physical agility with problem solving.

Neumann, athletic and sharp, completed the initial training—a stage where attrition is high. Still, his leadership showed itself more on days off, when he would corral friends for windsurfing expeditions on the Sea of Galilee. As he moved into the next phase of his naval training—serving on boats and helping coordinate operations on land—he made it clear to friends that the rigid, rule-bound hierarchy of the military wasn’t for him.