The roughly $128.6 million remaining loan balance on the Cohen Brothers property was sent to special servicing as it faced imminent monetary default 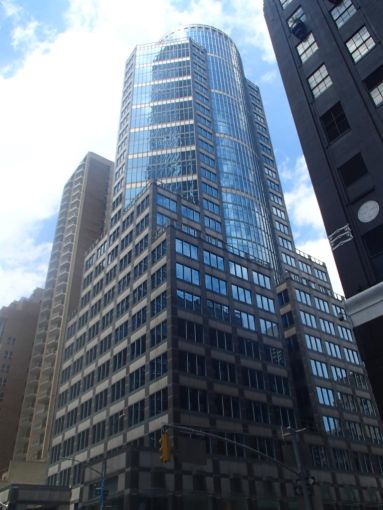 The remaining balance of a $130 million commercial mortgage-backed securities (CMBS) loan from Citigroup on Cohen Brothers Realty Corporation’s 31-story Manhattan skyscraper, International Plaza, has been transferred to special servicing due to imminent monetary default, according to data and analysis from research firm Trepp.

In June, the $128.6 million remaining loan balance was transferred to special servicer LNR Partners, after Cohen Brothers struggled to make payments on a portion of the debt because of some tenant turbulence and cash flow problems, per watchlist and special servicer commentary from Trepp. The debt is currently tagged as being 30 days delinquent and has stared down issues with delinquency a number of times over the last 12 months. The loan matures in October 2025.

Cohen Brothers failed to make principal and interest payments in March and April on a roughly $83.5 million slice of the debt, which, altogether, was originated and securitized in 2015. The $130 million loan had been split between the GSMS 2015-GC34 and CGCMT 2015-GC35 CMBS conduit deals.

The property at 750 Lexington Avenue — between East 59th and East 60th streets — has been dealing with cash flow issues since the loan’s origination, when the roughly 382,000-square-foot Plaza District asset was 100 percent leased out. Over the last couple of years, it’s also had to deal with the fallout of WeWork as well as pressure caused by a depressed office leasing market.

WeWork signed on in 2018 to take a little over 111,000 square feet at the property — or around a quarter of its total net rentable area — for about $80 per square foot, the New York Post reported at the time. The lease runs until 2035, and WeWork is obligated to continue paying its base rent and “additional rent” until lease expiration, according to servicer commentary from Trepp.

In April, Cohen Brothers reported to the servicer that it had collected almost 100 percent of its office rents — despite the asset being around 86 percent leased out, as of the third quarter of 2020, per Trepp data. Still, servicer commentary highlighted issues with short-term tenant rollover risk and current vacancies, headlined by two full floors that are “in dispute with WeWork” and account for $2 million per year in rent, as key factors affecting the property.

Also, in April, Cohen Brothers reported that it was “diligently endeavoring to collect” about $365,000 in back rent owed by retail tenant South Korean cosmetics firm Amorepacific Corp., which it said had not paid rent since November.

The same month that Amorepacific stopped paying rent, the loan started to amortize and pay off, but, by April, it was reported that the monthly loan payment had grown by $163,000 to surpass $1.9 million per month. Servicer commentary from Cohen Brothers characterized the monthly debt service as a “burden too heavy for the property to support both today and in the foreseeable future as the unfortunate effects of the pandemic continue to hamper the market for new office leasing as well as the operations of our retail tenants.” Cohen Brothers missed its principal and interest payments that month and in May 2021.

The property, which was erected in 1986, has had a turbulent history of cash flows over the last 10-plus years. From 2007, prior to the weight of the Global Financial Crisis hitting the real estate sector, through 2014, its net operating income (NOI) grew from just over $7.5 million to more than $12.3 million, per Trepp.

The next year, in 2015, Cohen Brothers financed it with the current $130 million CMBS loan. At the time that the loan was securitized, the property’s NOI sat at nearly $12.7 million. By the end of 2018, it registered a lowly $2.6 million in NOI, as revenues declined slightly and expenses climbed amid some leasing rollover.

The property was hit hard after law firm Locke Lord vacated around 119,000 square feet, or about 31.2 percent of the property’s rentable area, after its lease expired in late June 2016. Cohen Brothers, though, was able to tap into a $7.7 million reserve that was set up as part of Citigroup’s 2015 financing in order to release that space, per servicer commentary from Trepp. WeWork moved in around two years later, becoming the building’s largest tenant.