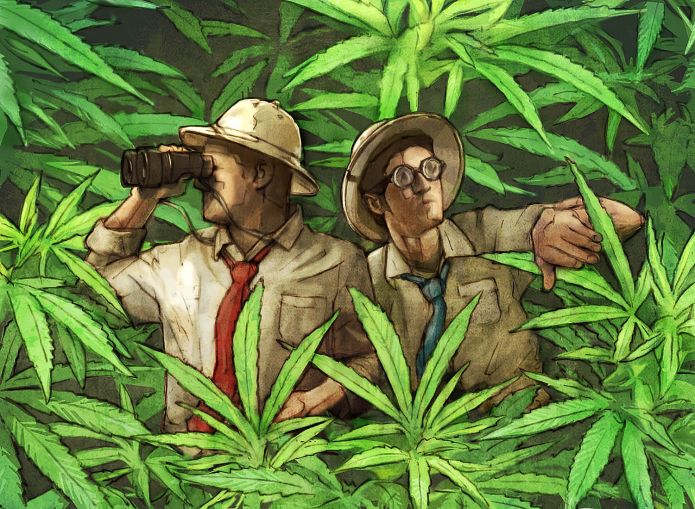 Len Tannenbaum, CEO of cannabis commercial real estate lender AFC Gamma, has found the pulse of the cannabis sector. He’s only been lending in the space officially for about a year, but the firm has already seen about $7 billion in potential transactions.

Over the last 12 months, more and more U.S. states have moved to legalize adult-use, recreational cannabis, opening the door for the potential to reap the rewards that come with hosting, regulating and taxing legal cannabis businesses.

Cannabis real estate lenders are seeing the demand at their doorsteps, as hungry investors and seasoned operators peer into new markets — namely New York, which Tannenbaum said is “going to be enormous.”

One cannabis industry executive told Commercial Observer that “if we wanted to, we could put $1 billion to work in New York. We’ve already been asked by the [big players] if we can write $100 million checks, because they have to build big and scale.”

More alternative cannabis real estate capital providers are entering the space and banks, although they are intentionally out of sight and out of mind, are becoming more comfortable and capable in financing cannabis real estate. It helps that cannabis safe-banking legislation is currently swirling in the U.S. Senate.

“Over the next six months, you’re gonna see [the number of banks] double or triple, and smaller banks that are involved will get more sophisticated,” said Akiva Gottlieb, a broker at tech-driven commercial real estate brokerage house Lev. “New banks are going to be coming in and making competition greater.

“It’s going to be a fun bloodbath,” he added.

Cannabis financiers who spoke to CO point to New York’s new legalization law, enacted in April, as an indication of what’s to come.

“New York is the financial center of the country, so folks are seeing it in their backyard,” said Richard Acosta, CEO and co-founder of Inception REIT. “You’ve got the whole tri-state area now that will have recreational cannabis. The federal prohibition hasn’t stopped the industry.”

Lenders and cannabis operators have made an art out of parachuting into different states and navigating the ins and outs of complex legal cannabis policy, trying to stay ahead of moving targets to capture the returns that cannabis can generate.

Cannabis operating licenses are bought and sold for up to $40 million each, or more, depending on the location and the type of business license. Lenders like AFC Gamma even use a cannabis operator’s license as one piece of collateral behind a loan.

“We secure [our loans] by cash flows, licenses and real estate,” Tannenbaum said. “The best case is you’re secured by all three.”

Over the last five or six years, the cannabis real estate lending space has become more sophisticated and institutionalized. The market shifted from being mostly dominated by sale-leaseback transactions, which were considered “the best type of financing, because it was the only type of financing,” Tannenbaum said, to having a better variety of debt products.

Pelorus Equity Group, one of the first private, cannabis real estate lenders to break into the scene about five years ago, specializes in providing secured, value-add bridge loans for the buildout of real estate housing cannabis tenants. The firm has deployed more than $180 million in debt into the cannabis sector since its inception, having only funded 52 deals out of around 2,000 that they’ve seen, according to Pelorus President Rob Sechrist, which serves as a testament to the strictness of the cannabis lending sphere.

Traditional bank lenders are an enigma, purposefully trying to stay out of the limelight, but they’re interested, active and competitive, Lev’s Gottlieb said.

Lev started running cannabis real estate debt deals sporadically about two years ago, and the volume of requests began to balloon naturally with the growth in the sector.

“We found out quickly how difficult it is to place with a bank,” Gottlieb said, adding that banks tend to be more buttoned up with cannabis, due to its federal prohibition. “A year ago, we were lucky to bump into a bank that did cannabis. Now, we work with more than 20 banks, and we’ve seen over 100 deals. There’s a flurry of them.”

Next quarter, Lev will have its best stretch yet in cannabis, with five bank deals, totaling $60 million, that are in line to close. Gottlieb said that once the news got out that Lev was closing cannabis real estate loans, the gates flew open. That exposure, though, while good for a platform like Lev, is what banks avoid.

“They typically tell us to not market who they are or that they are actively lending in the space,” he said. Many only have a finite amount of capital reserved for cannabis lending and can’t handle the deal flow that would come with that awareness.

“You have to stay nimble, because these [bank cannabis lending] programs don’t always last,” Gottlieb said. Banks will typically provide a lower cost of debt capital than alternative options for refinances or acquisitions, but both sides tend to not push leverage too high.

The bank loans on cannabis real estate tend to mirror what you’d see for a conventional real estate transaction on a stabilized and occupied property, Gottlieb said. Lev recently saw a $32 million portfolio refinance that three banks bid for; they came in with five-year terms, sub-5 percent fixed-interest rates and 25-year amortization.

“It speaks to the culture of the lending market today, which has become competitive,” he said. “Years ago, your best option for debt, if at all, was a 15 percent interest rate on a two-year deal, with equity and full-recourse.”

“You’d think, ‘That’s astronomical, how would anyone pay that?’ Well, when it comes to cannabis deals, the real estate itself can be such a cash cow that the cash flows can actually cover that debt service, so it’s not that big of an issue,” Gottlieb said. “And, people were desperate, because there was no other option.”

Pelorus’ weighted average interest rate, through its private mortgage REIT, is 15.3 percent, with loans being extended at a conservative basis — an average loan-to-value of 46 percent and loan-to-cost of 53 percent, according to a May 2021 fact sheet provided by the company.

“Other debt funds have had to reduce their pricing to real real estate debt fund pricing, which is around 7 to 10 percent,” Gottlieb said. “If a lender sends me a quote at anything over 10 percent, it’s just not the business that I’m in anymore. My borrowers are real estate borrowers venturing in cannabis; banks appreciate that.”

New York sparked a green rush in the state. Hungry investors poured in, buying land and, in some cases, obscure pieces of real estate to try to get their seats at the table. After all, the market that will be created by New York’s Marijuana Regulation and Taxation Act (MRTA) is projected to reach anywhere from $3.5 billion to $5 billion over the next few years, once it’s established.

This has all started to unfold before the state’s two new regulatory bodies created via MRTA have even formulated and implemented a set of regulations to govern and tax cannabis businesses in the state. Licenses aren’t even expected to start being issued until next year, once New York has a better idea of which local municipalities will choose to opt out of allowing cannabis retail operations in their communities. (They have until the end of the year to vote to bar these businesses.)

“How the hell do you know how many licenses to issue and where to issue them, unless you know who’s opting in and opting out,” one cannabis lender told CO on the condition of anonymity, adding that he expects New York to be very generous with licenses, mimicking a state like Michigan, which had issued more than 500 recreational cannabis licenses at year-end 2020, according to information from the Michigan Marijuana Regulatory Agency.

Nevertheless, AFC Gamma has been off to the races in New York, according to Tannenbaum, who’s company went public via the Nasdaq in March and is only the second cannabis real estate investment trust to be issued on a major exchange. New York-based Gamma Real Estate President Jonathan Kalikow, a fourth-generation real estate professional and veteran of the New York scene, is a partner at AFC Gamma, helping lead activity and advisory for clients at the property level.

Commercial property is the lifeblood of the licit cannabis sector. An operator — no matter where they sit along the supply chain — has to prove they have a piece of real property before being granted a license.

A New York license is being looked at like a “golden ticket,” according to Gottlieb, and the rush to nab one is fierce. Lev has seen a number of loan requests on vacant retail and industrial properties in New York, where the sponsor is forecasting cannabis use two or three years down the line.

“People just buy [vacant industrial with] all cash today,” he said, with plans to secure construction financing down the line to convert it to cannabis use. “Those are still in the early, preliminary stages, but we’re looking at a few.”

Just a week after New York’s law was enacted, it was reported that Green Thumb Industries (GTI) had been awarded tax incentives from Orange County to build out an old prison and some 40 acres around it in Warwick, N.Y., for cultivation and processing. GTI got in early, in fact, acquiring Fiorello Pharmaceuticals and its licenses in 2019, which made it one of just 10 vertically integrated, New York license holders.

The rush of M&A and consolidation from big players to break into the market, in anticipation of legalization, has created a ripe moment for those at the top.