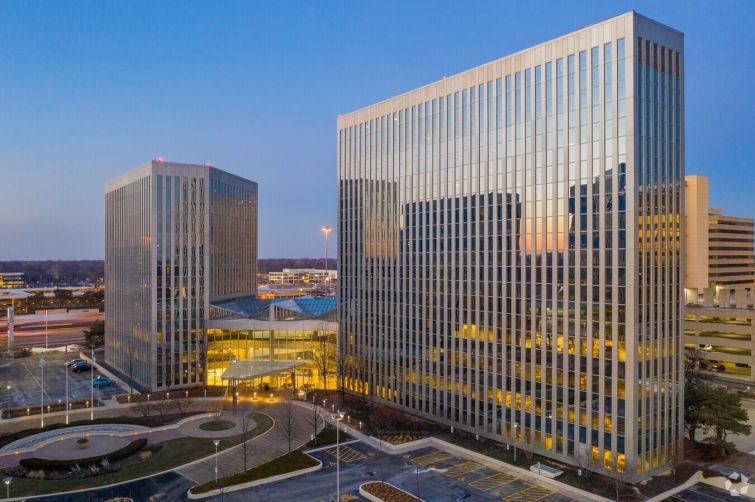 The financing was heavily competed.

“The appetite from the lender community on this opportunity was tremendous,” Roeschlaub said in prepared remarks. “The continued execution of the business plan post-COVID was a clear indicator to the lending community that this office product is still clearly in demand.”

Situated on a 14.1-acre campus at 8600-8700 West Bryn Mawr Avenue, Presidents Plaza comprises four towers linked by two three-story glass atriums. Built in the 1980s, the asset recently underwent a sweeping $20 million renovation that helped the execution of several leases at market rent during the pandemic. It also benefits from its location along the city’s Blue Line rapid transit system.

“The Angelo Gordon and Glenstar teams did an exceptional job revamping this asset and now have very favorable financing in place to continue to reap the benefits of significant mark-to-market upside,” Stolly said.

According to Crain’s Chicago Business, the property was previously owned by a joint venture between PGIM and Chicago-based Glenstar, until Angelo Gordon acquired a majority stake in the asset in March 2018. At the time, the $148 million deal pencilled at roughly $177 per square foot.

In June, Angelo Gordon — together with The We’re Group — sealed another refi for a 16-asset suburban office portfolio spread across Long Island’s Nassau and Suffolk counties, as first reported by CO. The Newmark team also arranged the debt in that instance, with Barclays and Citigroup providing the $350 million commercial mortgage-backed securities (CMBS) loan.