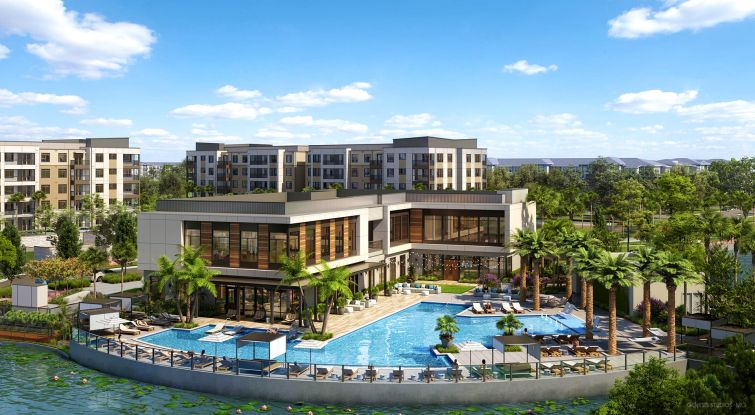 A rendering of Infield Apartments Photo: The Latigo Group

The Latigo Group has landed $45 million of construction financing for a planned multifamily development just outside of Orlando, Fla., the developer announced Wednesday.

Principal Life Insurance Company is supplying the construction loan for the $82 million project — called Infield Apartments — to be built on the site of a former county-operated softball field in Kissimmee. Los Angeles-based Latigo is also receiving $22.6 million of investor equity, including $10 million from CrowdStreet investors, plus $15.7 million in preferred equity.

“We’re super-excited about this property, because Infield Apartments will set a new bar for amenities for residents in the area, and because the long-term outlook for the Orlando market is so favorable,” Mark Maron, co-founder and managing partner at Latigo, said in a statement.

Located at 1900 Ball Park Road, the 384-unit project will consist of four five-story buildings and one four-story structure. The complex will feature 192 one-bedroom, 168 two-bedroom and 24 three-bedroom units. Its amenities include a two-story clubhouse, fitness center with dry sauna, golf simulator and resort-style pool.

Latigo said it acquired the 25-acre site with a “favorable land basis” and has the option of developing a second phase of apartments at the location. Two hundred and seven individual investors on CrowdStreet provided equity for the development, which is located around 16 miles from Orlando’s Walt Disney World Resort.

“The Latigo offering on CrowdStreet is an example of our Marketplace bringing to investors opportunities that reflect our investment thesis, which ranks Orlando highly as an investment market overall and for multifamily product in particular,” Ryan Strub, managing director at CrowdStreet, said in a statement. “We’re pleased to help The Latigo Group move some of their fundraising online to access the deep capital pool we’re creating on CrowdStreet.”

Construction of Infield Apartments is set to begin in July, with initial occupancy expected in late summer 2022. Greystar will serve as property manager of the development.

Officials at Principal did not immediately respond to a request for comment.