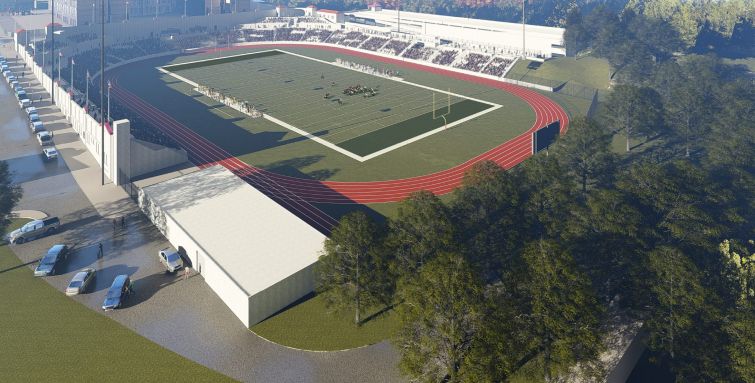 A rendering of a redeveloped Hinchliffe Stadium. Courtesy: BAW

BAW Development, the firm leading the redevelopment of historic Hinchliffe Stadium in Paterson, N.J., has secured $94 million in construction financing to move forward with a major planned redevelopment of the former Negro League baseball stadium, according to information from the developer shared with Commercial Observer.

Daniel Alger, a managing director and co-head of Goldman Sachs Asset Management’s Urban Investment Group said that the project “will provide much-needed affordable housing to seniors, generate quality jobs and revive one of Paterson’s historic gems, providing an incredible amenity that can be shared by the community for decades to come.”

“This project has raised the bar for public-private collaboration and community development, and we could not be happier to be a part of it,” Alger added.

The project, which is officially called the Hinchliffe Stadium Neighborhood Restoration Project (HSNRP), will see the redevelopment and restoration of one of the country’s last-remaining sites that hosted Negro League baseball games in the early- to mid-20th century.

Hinchliffe Stadium was originally built in 1932 and hosted a number of teams that played in the network of Negro League baseball. It quickly became a center of sports and entertainment in Paterson for years, hosting local area high school sports, comedy events, concerts, boxing, and — even at one point — stock car racing. It closed down in 1996, and it has since fallen victim to neglect and vandalism, as the city has explored ways to revitalize it and put it to use.

BAW, led by Baye Adofo-Wilson, is partnered in the project with RPM Development Group, which led the management and arrangement of the financing, the firm said. For the last few years, Adofo-Wilson has been working with the city of Paterson — his hometown — putting the puzzle pieces together to make the development a reality.

The developer’s plans include a revitalization of the 7,800-seat stadium as well as the addition of a six-story, 75-unit, seniors housing apartment building; a 5,200-square foot preschool; and a 315-space parking garage. The stadium will also get a two-story restaurant and a 12,000-square-foot museum, which will showcase the history of Negro League baseball, and Hinchliffe’s legacy and importance to the city of Paterson, according to BAW and the New Jersey Economic Development Authority.

U.S. Bank’s capital was provided as part of an ongoing initiative focused on supporting minority-owned businesses and advancing communities of color, according to BAW and U.S. Bank.

“We’re looking for ways to lend, invest and influence capital in ways that advance racial equity, and this project will do that,” said Steve Kramer, a senior vice president within the U.S. Bancorp Community Development Corporation. “It will catalyze tourism and spur investment in Paterson, a diverse and underserved community. It will create state-of-the art recreational facilities for Paterson’s youth. And it includes requirements to hire from the local community and award contracts to minority and women-owned small businesses.”

Alongside U.S. Bank’s community development entity, three other community development groups have come together to supply $21 million in New Market Tax Credit equity in support of the redevelopment: Community Loan Fund of New Jersey, Consortium America and RBC Community Investments. Goldman Sachs, through the construction loan it originated, also picked up a bond issued by the Passaic County Improvement Authority.

The developers said Goldman’s construction loan essentially served as a bridge loan for New Jersey Economic Redevelopment and Growth (ERG) tax credits that were approved a couple of months ago. New Jersey’s EDA approved the issuance of $67.2 million in state ERG tax credits in February, about $17.3 million more than what had been originally planned.

The stadium’s redevelopment broke ground in April, timed around the opening month of the 2021 Major League Baseball season. The developers are expecting the construction to take about 18 months, with a scheduled delivery in the fall of 2022.

“[This was a unique] project that required a remarkably creative financing strategy. We had to reach deep into the community development toolbox,” said RPM Development VP Joe Portelli. “We have been so focused for so long that it is also easy to forget that [our partners] made their commitments during the height of the COVID-19 pandemic and a time of great uncertainty.”

Adofo-Wilson said he was thankful “for the diverse group of financial partners that came together to fund the reimagining of this historic site. … Given the challenges of the last year, pushing this long-awaited infrastructure project forward required a highly complex, creative financing structure from all parties.”

His firm anticipates that the development will create about 94 temporary construction jobs, and seven full-time and 30 part-time permanent jobs in its facilities. (A third of these jobs will be reserved for minorities and local residents.)

The ballpark has been owned by Paterson’s public school system since the 1960s, with BAW locking in a majority stake in the property this year. The new Hinchliffe Stadium will serve as the home for a number of John F. Kennedy High School‘s sports and will also host concerts, festivals, sports camps, and also some semi-pro and professional sports, according to BAW.