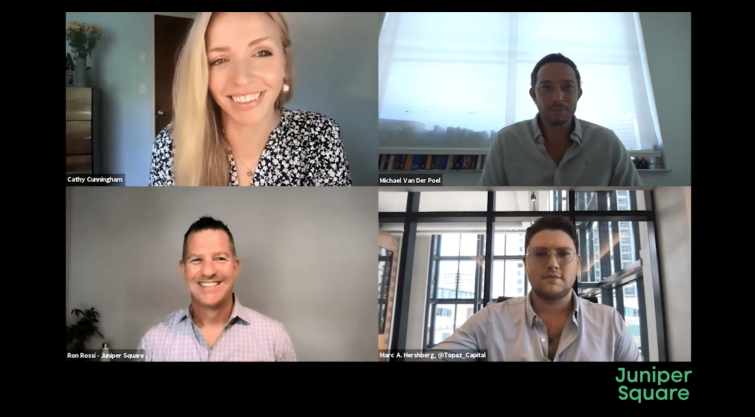 The multifamily sector was considered a safe haven asset class pre-COVID. Now, with rising vaccination rates starting to bring people out of their homes and back to some semblance of normal life, this has only been reinforced in terms of investor attention and as a place to securely park capital.

This was the premise that kicked off “Sparking and Scaling Growth — Investors Breaking Through in the Highly Competitive Multifamily Housing Sector,” a June 9 Power Briefing webinar hosted by Commercial Observer Partner Insights and presented by software company Juniper Square.

After Cunningham presented the opening premise, Van Der Poel spoke about how the sector held up throughout the crisis, especially for properties outside of high-density markets.

“We’ve really come out of it unscathed as an industry, for the most part,” said Van Der Poel. “We’re very happy and grateful to be owners and operators of multifamily in the Southeast, where we’ve been focused for the last decade. There was a real flight out of the cities from high-density environments, and we were the benefactor of that.”

Van Der Poel, whose company focuses on workforce housing, answered a question from Cunningham about that sector being “crisis-proof,” with testimony of its strength.

“With workforce housing, some of the renters were susceptible to slowdowns. So, we were very concerned,” Van Der Poel said. “We have about 12,000 apartments at the moment across about 17 cities. The resilience of the demographic in the sector really showed in the limited amount of delinquency we had on the whole.”

In terms of the sector’s competitive nature, Van Der Poel noted that any slack in the competition tightened once everyone settled into pandemic life.

“It snapped back very quickly,” he said. “There was limited distress on the equity side of our business, so we weren’t able to buy distressed deals. But as soon as Q3, Q4, and really Q1 of this year passed — and I seem to say this every year — but it’s now as competitive as last year, which was the most competitive we’ve ever seen it. It’s a feeding frenzy of deal flow.”

Hershberg — whose company, Topaz Capital, is a private equity shop primarily focused on multifamily in South Florida and Texas — echoed that not only is multifamily back, but it’s more competitive than ever.

“We view multifamily as a safe haven investment. It’s almost considered a fixed-income derivative among a lot of investors,” said Hershberg. “A lot of funds flow came in post-COVID that wasn’t anticipated, and the competition level, at least in Florida, has become more competitive than it was pre-COVID.”

“A lot of the new transactions — with capital coming out of California, New York, and foreign capital — requires a very minuscule, almost non-existent return on some of their assets, because the security and safety of the real estate is of primary importance to them, he added. “That’s made it more difficult for shops like ours, where we have to give our investors a return.”

Multifamily’s strength has been so great, said Van Der Poel, that investors are shifting to it from other asset classes.

“People are pivoting out of hotels, office and retail, all of which have been quite affected by the crisis,” he said. “Long-term trends in those underlying sectors have forced institutional allocators of capital to want more exposure in their portfolios to multifamily, and that’s getting more and more people capital in this space.”

Rossi said he’s also seeing a rebound in retail, largely driven by the return of people to groceries and restaurants.

“Grocery-anchored retail continues to be one of the hottest asset classes around retail, but we’re also starting to see a lot of restaurants returning,” said Rossi. “Also, a lot of people are either having second careers or doing something different — where owning a restaurant, a brewery, or a yoga studio, something like that, has been a passion. Those are starting to pop up as well. I think the strength of multifamily is starting to drive some of those secondary retail assets and show some improvement in that asset class.”

Rossi then spoke about Juniper Square, and how the company’s investment software streamlines the process for investors.

“We saw that there was a tremendous opportunity to make the private markets more like the public markets,” said Rossi. “In the public markets, if any of us had an interest in Amazon or Google or any company, we could do some research with a low fee and low friction, buy a share of that company, and then easily divest. We saw an opportunity in the private markets to transform the way people invest and do deals.”

“We helped them figure out where we could bring technology to bear, so we could create efficiencies for their back office and start to deliver transparency, data and information to all of the stakeholders,” said Rossi. “Juniper Square offers a few things within the platform that are very beneficial for commercial real estate sponsors. One of the most widely used problems that we’re solving, and features that we provide, is around capital raising. We’ve helped sponsors streamline the capital raise process by digitizing that entire process, both for the sponsor and the investor. So, as an investor, if you’re interested in doing a deal, you can go to the virtual deal room, take a look at the asset, and execute everything online.”

Another phenomenon that Juniper Square is seeing is a generational transfer of wealth, as millennial investors start to become a greater focus among the investor class.

“COVID definitely accelerated the use of technology,” said Rossi. “We continue to see this shift in wealth to millennials and younger investors, and younger real estate operators and sponsors. And they’re going in knowing that they want to use technology in every facet of their life. Juniper Square helps them do that.”