How Women in the Real Estate Workforce Weathered the Pandemic 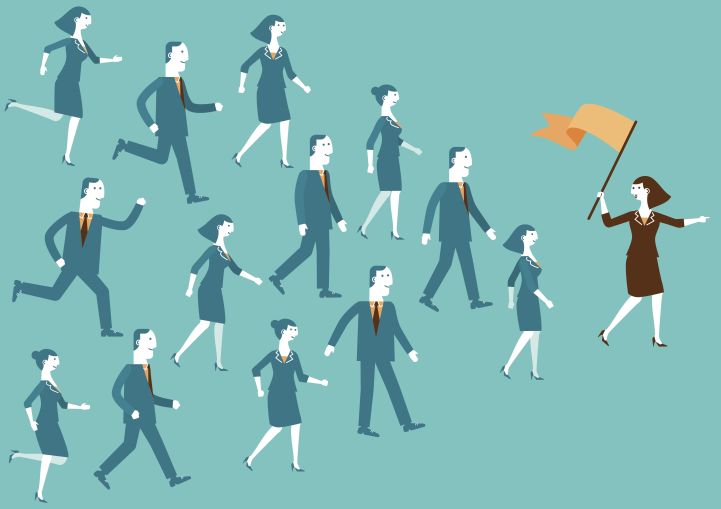 Women left the real estate industry and the workforce in general as they struggled to balance family responsibilities during the pandemic. How can real estate companies prevent them from leaving? Image: Getty Images

Despite all the change of the past year-plus, not much has changed for women in the commercial real estate industry. This is despite the verbal commitment of its leading companies and trade groups to gender equity, and the fact that the majority of new hires in the industry last year were women.

Instead, women — working mothers, in particular — say they continue to face stark challenges and choices that their male counterparts do not.

The pandemic has pushed millions of American women out of the workforce, and commercial real estate is no different. Some women in the industry have lost their jobs because of layoffs, while others have left because they struggled to balance demanding jobs with caring for children or elderly parents.

“Women were disproportionately affected in commercial real estate as they were society-wide during the pandemic,” said Wendy Mann, chief executive of the Commercial Real Estate Women Network (CREW), a professional networking and advocacy group, which is marking its 32nd year. “They became teacher, mother, caregiver.”

While no individual, company or organization has collected data on women leaving the commercial real estate industry, Mann said some corporate leaders told her they lost female employees who struggled with work-life balance and child care during the pandemic. She added that commercial real estate companies will continue to bleed female workers if they don’t allow hybrid forms of work and flexible schedules.

“What companies are seeing now is that they will lose their talent if they don’t create an environment that is flexible and supports the needs of a whole person,” Mann said.

There were 1.8 million fewer women in the workforce in May than there were pre-COVID in February 2020, according to Bloomberg. Finding child care remains a struggle for many women, because day care is getting pricier and harder to find than it was pre-pandemic.

Tina Tchen, CEO of Time’s Up, a charity that supports those affected by sexual harassment, told NPR last month that the lack of child care became so acute during the pandemic that her organization convinced 200 companies — including Google, McDonald’s, JPMorgan Chase, Verizon, Uber and PayPal — to sign onto a council focused on providing child care to their employees.

“Fifty percent of the country lived in a child care desert before the pandemic,” Tchen told the outlet in an interview. “And then, child care businesses were closing up during the pandemic. We don’t have enough caregivers to hire in this country, because we’ve never invested in caregivers as a workforce.”

She added that, “We cannot as a country have a sustainable economy if we don’t have everybody able to participate, including women. And, to do that, we really, for the first time, now have to invest as a nation in a caregiving infrastructure that supports all workers.”

During a Commercial Observer event in late June, Rebecca Rockey, Cushman & Wakefield’s global head of economic analysis and forecasting, said that women not only dropped out of the workforce at higher rates than men during the pandemic, they reduced their hours at work more than their male counterparts, too. Labor force participation for women with children declined 3.5 percentage points over the past 14 months, Rockey explained, because mothers typically do three hours of extra unpaid work at home each day, like caring for children or handling household chores.

Carly Tripp, chief investment officer at Nuveen Real Estate, said that women still face many of the same cultural challenges in male-dominated industries that they dealt with before the pandemic.

“Women start to leave as they have children, or they start to turn their heads and they’re getting a bit of a different experience in the finance industry than their friends are in more female-friendly industries,” Tripp explained. “So, you either lose them to a different industry altogether or lose them because they’re having kids.”

Her own executive assistant, a single mother, ended up quitting during the pandemic in order to focus on raising and schooling her children.

“I really did not want her to leave and I really wanted to partner with her, but at the end of the day, her priority was her kids,” Tripp said. “There’s a lot of pent-up demand for female workers, so once things [normalize] and kids are back at school, we’ll see women return to the workforce.”

Tripp recalled being the only female analyst at a real estate finance firm 20 years ago when she graduated from college. However, she noted that the composition of the real estate industry is beginning to change, and 60 percent of new hires in the industry last year were women.

“Where we still need to make progress is in those middle layers of management,” Tripp said. “We need to ensure we’re creating an inclusive culture.”

She added that she tries to remind her male employees to make sure they’re including their female colleagues in after-work gatherings or lunches.

“What I impress on the team is to just be cognizant. Are you leaving the woman out of your boys’ happy hour? And, if you are, invite them along. Because that’s the only way you can start to impact change and initiate relationships.”

Commercial real estate firms in general, and their leadership, should prioritize supporting working women — especially those with families — if they believe in their diversity commitments, CREW’s Mann said.

“Companies are sensitive to the lack of diversity in real estate and losing women will only contribute to that,” she said. “And I think they want to commit to keeping women in their workforce by creating opportunities for women and flex time for more professional opportunities.”

Mann noted that women may be caring for other family members, too. “Especially people in the workforce that are in senior executive roles — they’re caring for aging parents and people who have special needs in their families. Those are conditions we need to be aware of and sensitive to.”

There’s another way, too, that industry members can support their female workforce, and it’s something that the pandemic underlined in red.

Hybrid work arrangements tend to benefit women even more than men, Cushman & Wakefield’s Rockey said, because they’re doing more unpaid labor at home, but still crave the early-career mentoring that people get in the office.

“Hybrid is really where people are getting the best experiences, and it disproportionately benefits women,” she explained. “Being in the office has a lot of importance — creating trust and bonding — for young employees, especially young women; developing those networks and mentorship is so important.”