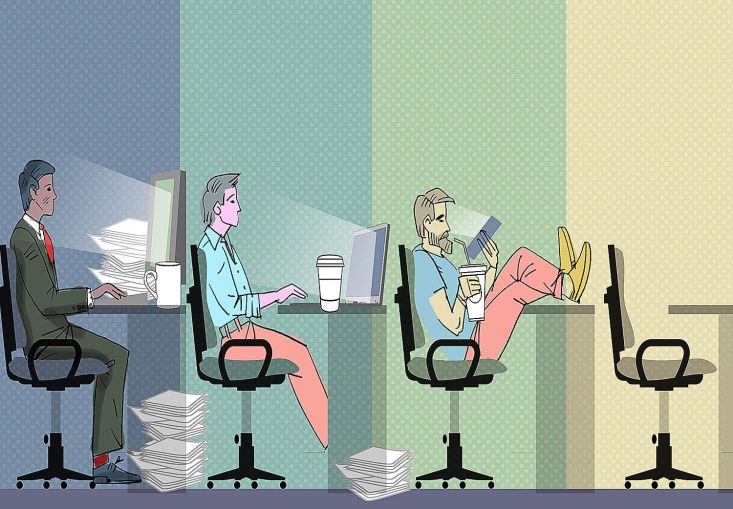 Office design is shifting as millennials occupy the majority of the labor force, and the pandemic has pushed offices in a new direction. Illustration: Val Bochkov/For Commercial Observer

With millennials expected to make up three quarters of the U.S. labor force by 2025, office designers, employers and landlords are forced to reckon with how they can recruit and satisfy workers between the ages of 25 and 40.

A focus on wellness — including gyms and meditation rooms — has become par for the course, but millennials also care more about air quality and ventilation than many older workers in the wake of the pandemic.

A recent survey by Carbon Lighthouse, a tech company that specializes in energy efficient building retrofits, found that 82 percent of millennials would feel safer returning to offices if they had access to real-time air quality data on a phone app or computer. Three quarters of millennial respondents to the survey — which went out to 1,000 U.S. consumers — said they would consider the air quality at work when returning to the office. Sixty-five percent of millennials surveyed said they had already used an app or air purifier to monitor or improve the air quality in their homes.

The survey echoed other recent studies on what millennials want out of the workplace.

“The No. 1 issue millennials care about is the pandemic, and the second is climate change,” said Brenden Millstein, president of Carbon Lighthouse. “That second thing is a big shift for commercial real estate.”

He added that using indoor air quality [IAQ] data to market and lease buildings has become increasingly common. “The fact that brokers even know what IAQ is is new compared to three years ago,” he added.

The use of real time energy and air monitoring is also important for landlords who have to slash carbon emissions. “Investors are expecting actual carbon reduction and ESG [environmental, social and governance] standards,” said Millstein.

In terms of space design, he pointed to the trend of square footage per employee rising again after dropping dramatically in the wake of the 2009 recession. Think pre-pandemic, open-air offices where workers toiled elbow to elbow.

Jay Shafran, head of design for URBN Playground, an office design and management consulting firm, felt that office amenities and improvements were driven largely by competition between big corporations aiming for top talent. He noted that the concept of corporate fitness centers dated back to 1980, when Mobil and PepsiCo built gyms on their office campuses.

Now, Shafran said, employers are “doing things that no one is asking for. It’s a matter of competition, and a marketing opportunity as much as anything. Companies aren’t putting them in because their people want them, they’re doing it to recruit people who don’t work there yet.”

The earlier waves of corporate amenities disappeared as many big companies — particularly large financial and law firms — consolidated and shed large blocks of office space during the Great Recession.

Landlords’ desperation to lease empty space and employers’ desire to get employees back in the office has helped juice a new wave of amenities. More elaborate amenities in multi-tenant office buildings have become more important, including nap rooms, meditation spaces, golf simulators, fitness centers and cafeterias that deliver to employees’ workspaces.

“Post COVID, a lot of people have left the workforce, and getting people back to the office is more important,” Shafran said. One trend he’s noticed is landlords’ increasing integration with mobile app platforms that allow tenants to book services like dry cleaning or iPhone repair, order food, or even call an elevator.

“It doesn’t just have to be a cube farm anymore,” Brady said. “It can be open soft seating. The old way of doing things was probably 70 percent private workstations and 30 percent collaborations, and now we’re seeing the reverse.”

He also underscored what many other people in the commercial real estate industry noticed during the pandemic — an uptick in suburban office leasing.

“More and more corporates are starting to look at hub-and-spoke models for office,” Brady explained. “They’re using flexible office space with shorter terms, giving employees the choice, and then measuring how employees vote with their feet. The old days of the 10-year lease are over. Now, a company can, with minimal exposure, set up a hub and spoke and see how productive their employees are.”

Numbers for areas around New York City highlight the trend. Office demand surged in Westchester County, Connecticut and Long Island in 2020, even as demand for offices in Manhattan declined sharply, according to May data from Instant Group. Demand for office shot up 60 percent in Greenwich, Conn.; 200 percent in Harrison, N.Y.; 250 percent in New Rochelle; and 50 percent in White Plains.

“That was a phenomenon that emerged in other markets that were mass transit-reliant,” Brady said, citing Chicago and San Francisco.

He noted that employers will continue to add new incentives and perks for both on-site and remote work from a suburban office, like providing discounted gym memberships. “This idea that on-site activity will be the new off-site,” Brady said. “If you just want to get out of your house, are there alternatives for car-friendly work near home?”