There Are Just 21 Lesbian Bars Left in the US, and Some Won’t Reopen

Of three remaining in New York City, one has not yet reopened 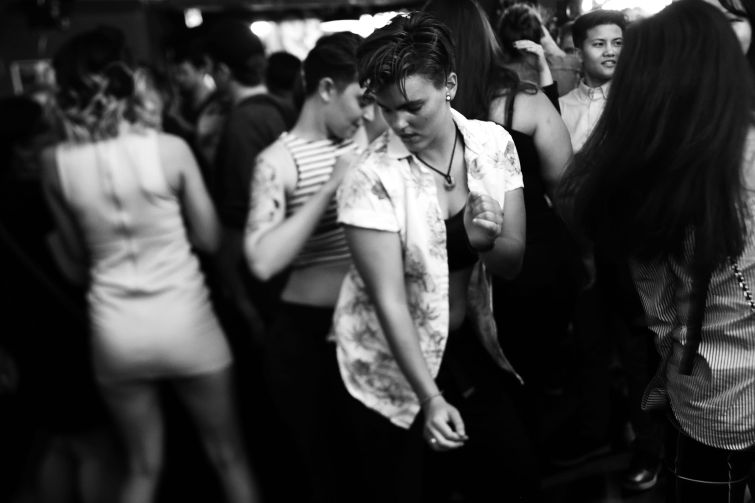 It was around 2015, a summer Saturday when she was still in college, still quoting exuberant song lyrics in Instagram captions, still new to being openly gay. That day, she was alone at the bar at the local lesbian haunt waiting for a friend. It was Saturday afternoon so the older lesbians were out. Typical.

McHugh-Chiappone had already been in that cramped West Village bar, festooned with lanterns and tinsel, for a few hours drinking with another friend who was stuck in the city for the weekend. She was a little drunk, outside it was very hot, and the older lesbians were hitting on her. “Save me!” she mouthed to the woman next to her, a total stranger.

The woman immediately swooped in and started speaking with McHugh-Chiappone like they were old friends.

“Are you two together?” one of the older women asked.

“Not yet,” the younger woman replied.

And then they were. “We spent almost every day of the next year together,” McHugh-Chiappone said.

Lesbian bars like Cubbyhole are an endangered species. There were 21 left in the entire United States at last count, just three in New York City, and one may not reopen. There’s just one in San Francisco; one in Houston; two in Phoenix; and zero in Austin, Miami, Los Angeles, Portland (Oregon and Maine), New Orleans, Chicago. The lone lesbian bar in Philadelphia closed during the pandemic; so did the last one in Lincoln, Neb.

These numbers reflect a global trend, in which the number of spaces dedicated to lesbian and queer women have been steadily declining over the past two decades. That was true before the pandemic, but the last year highlighted how precarious, how beloved, and how necessary these institutions are.

“I never really met girls that I dated at bars,” said Erica Rose, a filmmaker who launched the Lesbian Bar Project in the fall of 2020 to bring attention to the dwindling number of lesbian bars in the country. “For the most part, it was a place for me to be with my friends and be, unapologetically myself, and feel my community around me.”

Experts and researchers have opined on the reason for the decline in lesbian spaces, and they generally converge around several factors: assimilation, gentrification and the rise of online dating.

“After gay marriage was legalized, a lot of people felt that our country was moving in a direction where I can go to a bar with my girlfriend down the street and not feel threatened in any way,” Rose said. “So I think that there’s a sweeping heteronormativity that is now allowing us to be safe in other spaces, but it also erases some of what makes queer spaces so unique, and so special, and so important.”

But, while it’s true that the rise of the gay and lesbian bar was in response to a need and to being ostracized from wider society, the function of dedicated spaces continues to be pivotal.

“Of course safety is paramount,” McHugh-Chiappone said, “but it’s not only about safety, it’s about comfortability, too, which I think is something that people negate.” It’s about being in a space where you are the default, where you don’t have to explain yourself.

That’s how Sharni Tapuke-O’Neal, the general manager at Henrietta Hudson, the only other lesbian bar in Manhattan, after Cubbyhole, explained it. “It was about the place. It was about having a space where you could come in and nobody was going to judge you,” she said, referring to the 1990s, when the bar first opened. “Nobody was going to misgender you. Nobody was going to turn around and say, ‘Oh, why are you wearing that? What are you? Are you bi, are you les?’”

Henrietta Hudson has been open for 30 years, and the distinction of being owned and managed by lesbian women, which hasn’t always been the case.

Lesbian spaces go back at least a century in New York City, but wouldn’t have been defined as such. “Over the decades, and in the past century, there have been shifts in the types of spaces that lesbians and queer women have used to gather,” said Gwen Shockey, an artist who runs the Addresses Project, which documents and maps those spaces in New York City.

During Prohibition, there were informal salons and tea rooms that were gathering spaces for lesbian women, such as Eve Adams’ Tearoom on MacDougal Street, which opened in 1925 and which police shut down less than a year later. There was supposedly a sign in the window that said, “Men are admitted but not welcome,” according to research by Gwendolyn Stegall, an architect at PBDW Architects, who wrote her master’s thesis on the subject.

By the 1950s and 1960s, lesbian bars began cropping up more widely, and were mostly run by the mafia. They were divey, underground, and so often raided that the women’s detention center in Greenwich Village came to be known as the “country club” by lesbians in the know, according to research by Joan Nestle, author and co-founder of the Lesbian Herstory Archives.

As the 1960s gave way and the gay rights movement intensified, the number of gay and lesbian bars grew, especially in pockets of coastal cities, such as Manhattan and San Francisco. Bonnie & Clyde, opened in the 1970s on West Third Street, was the first to be owned by lesbian women, a major breakthrough.

In the 1980s, as the AIDS crisis ravaged the community and the gay rights movement intensified further, nightlife continued to be a bedrock of the queer community, and lesbian bars coupled as spaces for activism and organizing in addition to socializing. By the 1990s, when Mayor Rudy Giuliani was on a campaign to clean up the city, many gay and lesbian nightclubs began to shift.

“There was a push then to move away from the term ‘lesbian bar’ and more toward clubs and parties and nightlife that was more visible and more glamorous and more beautiful,” Shockey, of the Addresses Project, said.

The 1990s and early 2000s were the heyday of the lesbian bar in New York City, with more bars than ever before, and more visiblity on the national stage as lesbian activism led to a more robust, explicitly lesbian community, according to Stegall.

Henrietta Hudson opened in 1991, taking over from an earlier iteration of Cubbyhole, which had been opened by the owner of Bonnie & Clyde’s, Elaine Romagnoli, in the 1980s. Back then, the DJ was a boombox with a mixtape, and, every few hours, one of the staff would rewind the tape back to the beginning. It was part of a vibrant scene of lesbian bars, parties and activism.

Today, Henrietta doesn’t identify as a lesbian space, but as a “queer space built by lesbians” according to its owner, Lisa Cannistraci. “It has always been a queer space for anyone who wanted to find solace or a safe space to be,” Tapuke-O’Neal said.

Similarly, Cubbyhole owner Lisa Menichino has referred to the bar as “lesbian with an asterisk,” because it is welcoming to a much wider spectrum of queer-identifying people, according to the LGBTQ publication Them.

That evolution, from explicitly lesbian spaces to queer or diverse spaces, tracks the evolution of the LGBTQ community itself. In fact, there are several newer bars and clubs in New York that identify as queer, including Happyfun Hideaway, which calls itself a “queer tiki dive bar”; The Rosemont, a queer jazz club; and 3 Dollar Bill, a “queer-owned and -operated nightclub.” All three opened in the last decade and all within a mile of each other in Brooklyn’s Bushwick and East Williamsburg neighborhoods.

“A lot of people feel very strongly about the kind of sacred nature of having space that is only for lesbian women,” said the Lesbian Bar Project’s Rose. “But for me, I’m so against that because we can’t stand for that. There are so many lesbians who are also trans men, who once identified as a lesbian; there are bi-women, there are pan-women — and they’re still lesbians and still part of the lesbian community.”

But another, more fundamental reason that lesbian spaces are dwindling is that it’s difficult to keep the doors open. Much of that is due to the increasingly small margins that all bars and restaurants in pricey cities contend with.

To that end, before COVID, some queer nightlife had moved to roving party collectives with no dedicated spaces that have grown into recognizable institutions nonetheless. That includes Papi Juice, dedicated to queer and trans people of color, as well as Bubble T and Hot Rabbit, with host parties and other events in difference spaces each time. Without monthly rent, the party organizers don’t have as much overhead, and can therefore be financially viable.

“Largely lacking the financial or political capital to secure long-term spaces, lesbians’ and queers’ places are more scattered and visible only when you know where and when to look,” he wrote.

That may also contribute to the large imbalance between the number of gay and lesbian bars. “Gay men have always had way more spaces than lesbians, but that’s the culture,” said Lauren Turbo, a graphic designer who works with many of the city queer bars, parties and events. “The culture of gay men is they will go out, and they will spend money and they will party it up, Monday through Sunday.”

“They were known as this dance-heavy nightclub spot, and they are now a restaurant-lounge-cafe” Rose said.

There is now seating along the sidewalk, available by reservation, and small plates to go with your Dyke Beer or Grapefruit Spritzer. “It was an idea [Lisa Cannistraci] had before the pandemic, but the pandemic was the impetus to that,” Rose said. “They’re still going to be dancing Friday and Saturday nights. But now, she has a business model that can actually be profitable during the week, because she wasn’t profitable [before].”

Ginger’s, the only lesbian bar in Brooklyn, has been closed since March 2020. Its owner has previously said that she would only reopen once the restrictions were lifted. She did not reply to requests for comment.

But the disappearance of lesbian and queer spaces is a forgone conclusion. Throughout the pandemic, without the ability to have live events, those that remain have pivoted, adapted, crowdfunded and been supported by their communities. The Lesbian Bar Project is launching a second fundraiser this June, and presenting a documentary focused on several of the remaining bars.

Rose, the co-lead on the project, has her own memories of Cubbyhole.

That’s when she realized that there was somewhere she did belong.

“It really made it clear to me that there was a community waiting for me once I was brave enough to come out. And I just want to make sure that the future generations get that.”