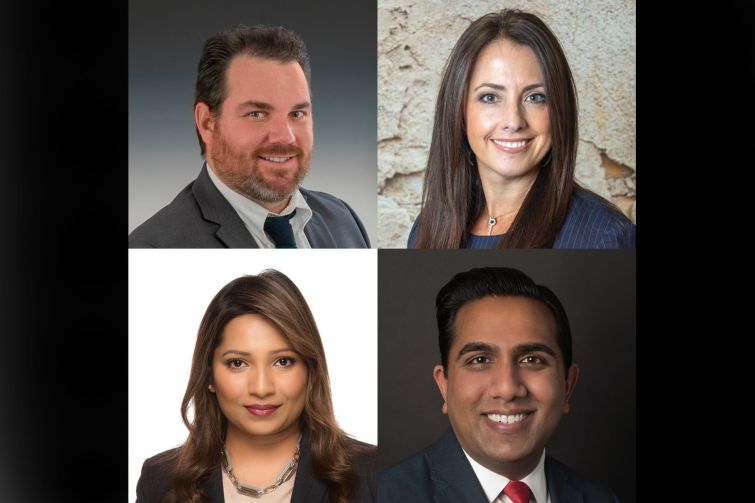 Commercial Observer's transportation forum kicked off with a panel of Alan Bates from Holt Construction, Alexandra Perotti, also from Holt, Asmita Gharat of American Airlines and Hersh Parekh of the Port Authority. Image: Julia Cherrault for the Commercial Observer 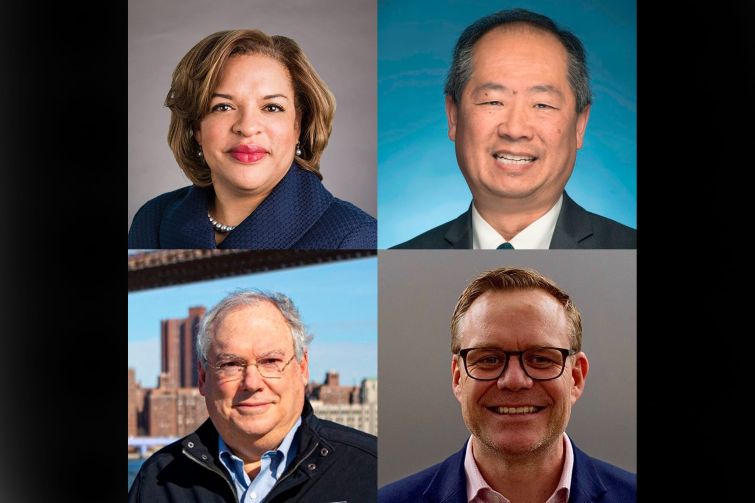 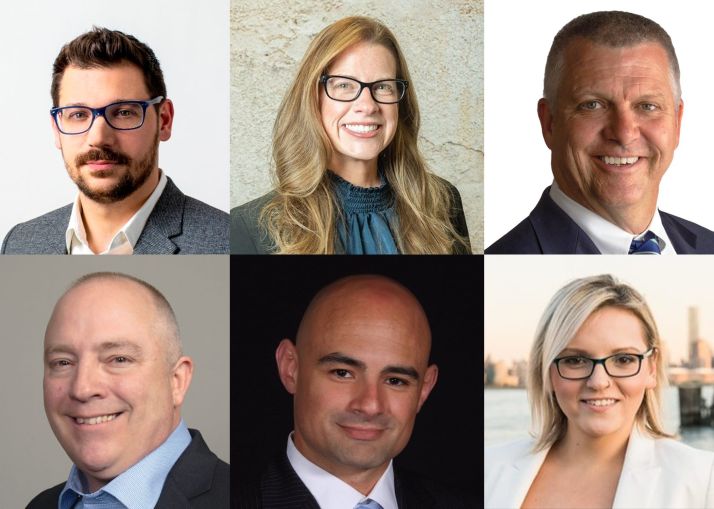 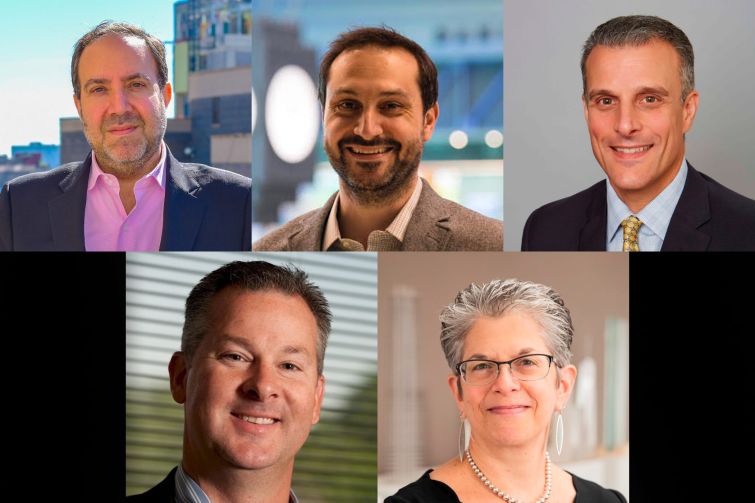 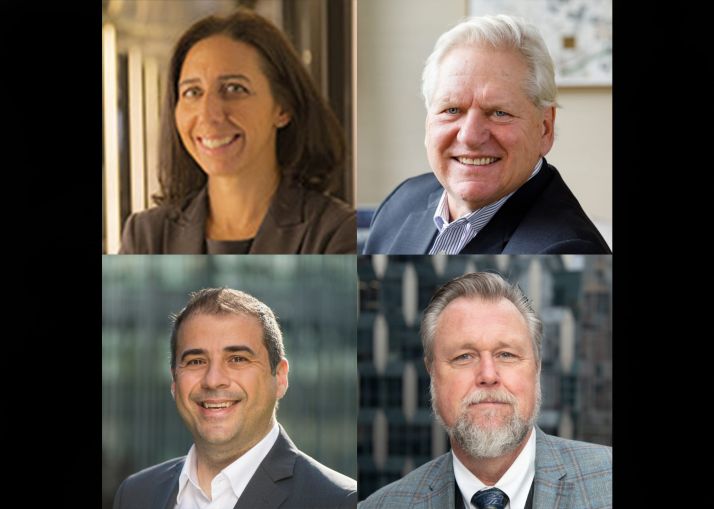 Transportation and construction executives who work with railroads and airports in the New York area learned major lessons about design and project management during the pandemic, according to remarks during a Commercial Observer forum last week.

John McCarthy, chief of staff for the Metropolitan Transportation Authority’s construction and development arm, said that his agency had used the past year to sped up efforts like the Long Island Rail Road’s third track project, which involves building a new track from Floral Park to Hicksville on Long Island, and work at Grand Central Terminal and Pennsylvania Station.

“If you go to Grand Central to the mezzanine, we went in there and redid the work,” McCarthy said. “A lot of that work was private projects with developers from the East Midtown zoning. When people come back in the next few months, they’ll see some of these projects we were able to move forward during COVID, like the new entrance on 33rd Street at Penn.”

“When we started out, it took half an hour to wipe down each car with wipes,” Eng said. “Then, we moved to electrostatic sprayers and we could do a whole car in five minutes. We developed first-in-the-world, real-time routing information for our ridership. They could see, car by car, which trains were more crowded; we did that using technology that already exists on our trains. Through that type of technology, we’re able to encourage customers to come back. And we’re piloting new HVAC systems.”

Station employees and conductors have also been distributing hand sanitizer and masks to riders who need them, Eng said.

Hank Gutman, commissioner of the New York City Department of Transportation, mentioned his agency’s efforts to create safer streets during the pandemic, and to “reduce reliance on the private automobile by making other options more attractive, whether it’s bikes, buses or e-mobility.”

He also mentioned congestion pricing, a toll on drivers in Manhattan south of 60th Street that the DOT and MTA have spent the last few years trying to implement. Federal transportation authorities recently signed off on the program after dragging their feet during the Trump administration.

The second public transit panel of the day, moderated by Carlo Scissura, president and CEO of the New York Building Congress, revolved around the conversion of the Farley Post Office building into Moynihan Station. Doug Carr, executive director of the Moynihan Station Development Corp., explained that the state began trying to acquire the property from the postal service in the early 2000s.

After the acquisition, the state made part of the property into a condominium to allow the post office to hold onto its slice of the building and continue some operations there.

The renovation of the former postal hub focused “on passenger experience, moments of hospitality, and accessibility for the traveling public,” Carr said. “We focused on moments of surprise and delight, like the art program, the incorporation of light into the commute, and bringing the classic and contemporary parts of the building together. The other piece was compatibility for two different railroads. Across the street at Penn Station, the ability for two different railroads to operate in the same space is a challenge.”

Laura Ettelman, a managing partner at Skidmore, Owings & Merrill, who helped oversee the design of the new station, noted that her team focused on making the Long Island Rail Road and Amtrak tracks more accessible than they are at Penn.

“One of the greatest things the new train hall does is provide better access to the tracks,” she explained. “The accessibility at Penn wasn’t nearly as good as it will be in the new station, because there’s elevator and escalator access to each platform. The free movement and comfort that passengers will have, in addition to the amenities, really improves the experience. It just alleviates all that overcrowding and the feeling that you’re always squeezing into a small, dark space.”

Mark Torre, a managing partner at engineering firm Jaros, Baum & Bolles, explained that the large new skylight installed above the trusses of the old mail-sorting facility forced them to consider some innovative heating and cooling systems.

“You have these skylights and, although quite beautiful, as far as mechanical heating and cooling, they created a great challenge,” he said. “We developed a hydronic heating and cooling system that really improves passenger comfort. We have some zones that are in heating and in cooling, so passengers feel very comfortable as they’re walking through this great space.”

John Sullivan, a vice president of operations in construction firm Skanska’s civil arm, celebrated the fact that “Moynihan is a destination now, rather than a facility like Penn Station, that people run in and out of as quickly as they can. I think that much like Grand Central, Penn Station, in the future, will be a destination for everyone in the tri-state area and for people around the world.”

During a panel on the redevelopment of John F. Kennedy International and LaGuardia airports, Alexandra Perotti, a director at Holt Construction, said that she had used the pandemic to engage more with minority- and women-owned businesses and small subcontractors who might be interested in working on construction of the new terminals.

“We had a session on the project labor agreement, engaging the community and small businesses and MWBEs [minority- and women-owned business enterprises], so they understood what the project was and how to navigate through these nuances that some people don’t know,” Perotti said. “We developed a new approach — the next phase is going to be helping the subcontractor base to pre-qualify for work on JFK Terminal 8.”

Hersh Parekh, director of government and community relations for the Port Authority of New York & New Jersey’s airport redevelopment projects, noted that the agency has tried to engage with local business owners and stakeholders through a 40-member JFK Redevelopment Community Advisory Council.

Asmita Gharat, a project manager for American Airlines, emphasized the company’s efforts to hire locally for the planned renovation of Terminal 4 at JFK, which was put on hold during the pandemic and dramatically scaled back after 14 months of declining revenues and dwindling numbers of airline travelers. Alan Bates, a senior project manager at Holt Construction, moderated the discussion.

A separate airline construction panel, moderated by design firm Mancini Duffy’s John Anthal, detailed the challenges of delaying work during the pandemic, as well as retraining hundreds of workers in the intricacies of social distancing, hand-washing and mask-wearing on projects that did move forward.

“A year ago, we were well underway with our program at [LaGuardia Airport], where we are undertaking a $4 billion expansion of Terminals C and D, and then at JFK, we were about to award contracts for Terminal 4,” said James Kissmer, manager of improvement and innovation at JFK International Air Terminal. “And then, we had to put some things on hold at Kennedy. We were thinking about how we minimize our capital spend. … We just announced our $1.5 billion scaled-down version of our T4 expansion.”

Ryan Marzullo, a managing director of construction and design at Delta Air Lines, said that his team was able to move forward as planned during the pandemic on the construction of a new terminal at LaGuardia, with very few design changes.

“We didn’t have to change anything on the design side,” he said. “We just kept rolling. Our designers wanted to ensure our terminals were spacious.”

Amanda Clappsy, a project executive at Holt Construction, said that her team had to rethink their safety and procurement protocols from the ground up last year.

Jay Fraser, a vice president at Turner Construction, hopes to bring some of his firm’s remote work practices into post-COVID life.

Iga Wyrzykowski, director of design and construction for airport spa chain XpresSpa, said that her company nearly shuttered its doors after having to close down all 50 of its spa locations across the globe.

“We had 900 employees that suddenly didn’t have a job anymore,” she said. “We were struggling to figure out, how do we make money during this pandemic or help out the pandemic? So, the chairman of the board came out and said, ‘Can we do COVID testing in airports?’ We already had the real estate in airports and those relationships developed. And then, I was designing a COVID testing site in JFK Airport. JFK Terminal 4 was our first location.”