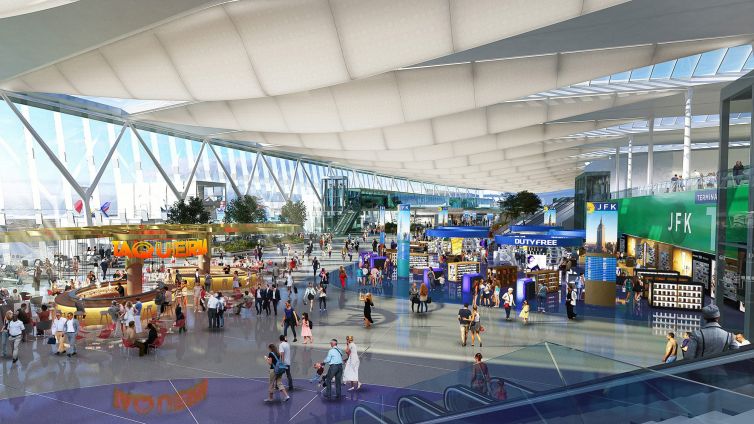 Construction for a new Terminal One at JFK is on hold as airline industry revenue craters during the pandemic. Rendering: Port Authority of New York & New Jersey

New York City’s two airports, LaGuardia and John F. Kennedy International, have lost an unprecedented amount of revenue as the pandemic largely eliminated tourism and business travel over the past year.

The Port Authority of New York and New Jersey, which operates the airports, has nonetheless been pushing forward with Gov. Andrew Cuomo’s dramatic plans to renovate LaGuardia. At the same time, though, the planned $15 billion revamp of JFK is on hold until the bistate agency either gets federal aid or sees travelers return.

Passenger traffic at the Port Authority’s three airports, which also includes Newark Liberty International, had plunged at least 95 percent during the pandemic, agency executive director Rick Cotton told Commercial Observer in October. The Port Authority is seeking $3 billion in federal aid to plug the projected revenue shortfall from 2020 through 2022 created by the pandemic.

Cotton said he is unsure what the agency will do if the new Biden administration doesn’t make that happen.

“We are still advocating as strongly as we can with the federal government in D.C. to recognize that this is a once-in-a-generation, or once-in-a-hundred-years, financial devastation, and that they really need to step up and provide some degree of financial support,” Cotton said last October. “We’re making contingency plans, in terms of what the impact will be. We’re trying to hold off making final decisions until we have a somewhat better read on both what the best judgment is, in terms of the recovery trajectory, and what’s to be expected from Washington.”

As the airlines and the Port Authority struggle with a massive decline in revenue, projects that had not started construction when the pandemic began in March are on indefinite hold.

This is particularly the case at JFK, where the international travel that comprised most of the airport’s passengers slowed to a trickle. American Airlines is moving forward with its plans to build a new $400 million Terminal 8 at JFK, but the multibillion-dollar redevelopment of three other terminals has stalled.

The $7.4 billion effort to develop a new Terminal 1 was supposed to break ground last summer, but is now expected to start construction sometime this year. Lufthansa, Air France, Japan Airlines, Korean Air Lines, The Carlyle Group, JLC Infrastructure and the Union Labor Life Insurance Company are jointly developing the 2.8 million-square-foot project, which will replace the current Terminals 1 and 2 and an aircraft parking area. It was originally supposed to open in 2025, but the current timeline remains unclear.

Delta Air Lines’ $3.8 billion plan to build a new Terminal 4 also remains at a standstill, after an initial announcement in February 2020, just before the pandemic began. JetBlue’s efforts to construct a new $3 billion Terminal 6 also remain on ice, after a groundbreaking planned for 2020 never materialized. Vantage Airport Group, RXR Realty and American Triple I Partners are developing the 1.2 million-square-foot project, which will include 12 new gates, 74,000 square feet of retail and new roadways. Before the pandemic, construction was expected to finish in 2025, with the first gates opening in 2023.

LaGuardia, meanwhile, opened a significant portion of its new Terminal B last summer, as New York City recovered from its first major wave of COVID-19 cases. Although the first phase of the 580,000-square-foot terminal opened in December 2018, a second, 210,000-square-foot concourse and New Arrivals Hall opened last June. It includes a pedestrian skybridge, a children’s play area, public art, a green space with seating and landscaping, and a pet relief area, plus several new retail options. Ten additional gates will open next year.

Delta Air Lines is also moving ahead with its new $4 billion Terminal C at LaGuardia. The airline opened the first phase of its 37-gate terminal in the fall of 2019, and it expects to finish construction on its arrival hall and other gates sometime in 2022.

Besides the $8 billion plan to rebuild LaGuardia itself, the Port Authority hopes to build a $2 billion AirTrain that would connect the No. 7 and Long Island Railroad train stops in Willets Point, Queens, to the airport. The Federal Aviation Administration is currently conducting an environmental review of the project after collecting public comments on the proposal last fall. The so-called “Backwards AirTrain” has sparked criticism from environmental advocates, local Queens homeowners and transit advocates, who argue that the route doesn’t improve travel times to the airport for most New Yorkers.

Cotton, the executive director of the Port Authority, told CO last week that when it comes to building the AirTrain, “We can’t let the perfect be the enemy of the excellent. Right now everyone who’s coming to and from LaGuardia has to be on the roadways. The AirTrain will reduce congestion for people who are on the Grand Central Parkway or other roadways who aren’t interested in the airport. And it will reduce the environmental impacts and greenhouse gases created by congested roadways.”

Mitchell Moss, an urban planning professor and director of Rudin Center for Transportation Policy & Management at New York University, argued that the AirTrain would still offer an improvement over LaGuardia’s traffic-choked status quo. Terrible traffic has long plagued the East Elmhurst airport, because drivers can only reach it via one early 20th-century highway: the Grand Central Parkway. The Depression-era road has been under construction on and off for the last decade, which only exacerbates congestion around the airport.

Moss posited that the Port Authority could direct some for-hire vehicles and passenger parking to Willets Point, easing the almost round-the-clock traffic jam around the airport.

“That’s going to be the distribution hub for surface transportation,” he said. “The goal is to get the cars off the airport property. There isn’t enough space for parking, loading and unloading.”

Moss also pointed out that the route was “politically viable because it’s an existing [publicly owned] right-of-way. It tends to be financially and legally the most convenient path” because it doesn’t involve taking private property through eminent domain. Former councilman Peter Vallone Sr. torpedoed a previous effort to extend the N train to LaGuardia in the early 1990s, arguing that it would be too disruptive for Astoria residents unless the project ran underground.

Of course, part of the funding the construction of the new AirTrain would hinge on the federal government pumping $3 billion into the Port Authority to cover its projected revenue shortfall from the pandemic. But agency officials believe that President-elect Joe Biden will push Congress into ponying up the funding. Biden, a long-time Amtrak rider, has been vocal for decades about the need to upgrade rail and airport infrastructure throughout the U.S.

“This is going to be an administration led by a president who has demonstrated incredible support for public transit and infrastructure improvement,” Cotton said. He noted that it was then-Vice President Biden’s criticism of LaGuardia in 2014 that helped galvanize the governor’s plan to rebuild the dated airport.

“If I blindfolded you and took you to LaGuardia Airport in New York, you’d think, ‘I must be in some third-world country,’” Biden joked in the 2014 speech.

Nevertheless, transit experts believe that LaGuardia will be key to New York City’s post-COVID economic recovery. Despite its age and notoriously cramped footprint, LaGuardia remains one of the country’s busiest airports, taking on the majority of domestic flights that arrive in New York City.

“LaGuardia is New York’s great link,” Moss said. “Once we have a vaccinated population, there are going to be a surge of people who want to travel [domestically]. LaGuardia is going to recover faster than JFK. International travel is a bigger problem, because it’s held hostage by the success of the vaccines.”