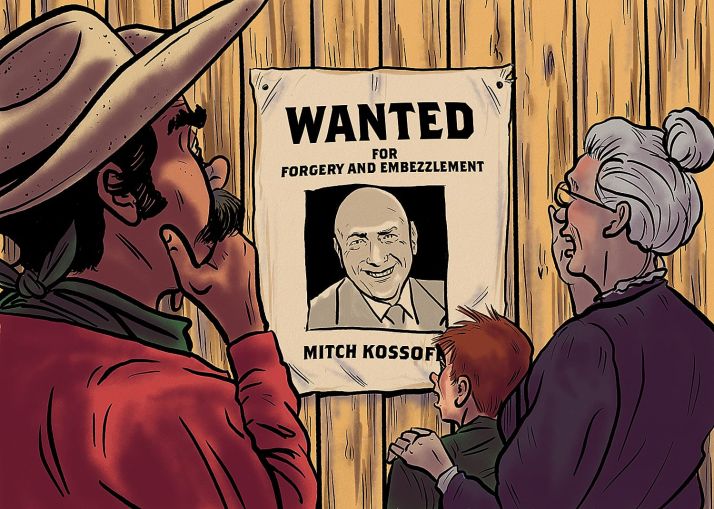 Mitchell Kossoff earned the "Most Dubious Real Estate Figure" of the year award after being accused of disappearing with millions from his clients' escrow accounts. Illustration: spencer alexander for commercial observer

If clients chasing you about millions of dollars in escrow funds, debt collectors knocking at your door, and getting your own mother in hot water after forging her signature on loan documents doesn’t earn you the award for “Most Dubious Real Estate Figure of the Year,” then nothing will.

Mitchell Kossoff — who represented some of New York city’s biggest multifamily landlords — appears to have disappeared early last month, with his clients and partners in his eponymous law firm reportedly unable to reach him for weeks. (It goes without saying that Commercial Observer has also been unable to reach Kossoff for comment.)

But, while the exact whereabouts of Kossoff might be a mystery, his legal troubles are very well-documented.

Starting in early April, Kossoff was hit with suits for at least $4 million from firms, including SSM Realty Group, for missing escrow funds. Four landlords later filed an involuntary bankruptcy petition against Kossoff, accusing him of making off with $8 million from their escrow accounts.

By May, it seemed a new legal action against Kossoff was cropping up in court on a weekly basis. Add to this the more than $4 million in loans that lenders, mainly merchant cash advance companies, have been trying to collect, claiming in court that Kossoff defaulted on them.

Kossoff’s law firm seems to have dissolved, too, with its website going dark in mid-April. Staff resigned and added to Kossoff’s mounting legal trouble by filing a lawsuit, claiming that they’re missing paychecks.

But perhaps the coup de grace for Kossoff’s worthiness for this disreputable award was the Mother’s Day gift he gave his elderly mom, Phyllis Kossoff. She claimed that her son fabricated her signature on more than $2 million in defaulted loans, with one lender coming after her in court to collect.

“I am 94 years old and have been the victim of a terrible fraud,” Phyllis Kossoff wrote in an affidavit.

Despite Kossoff ghosting his clients and colleagues for weeks, he at least had the decency to reach out to his mom during his disappearing act to let her know about the scam.

“I did not learn of the fraud until last week when my son, Mitchell Kossoff, told me that there are some documents which had my signature but which I had not signed,” Phyllis Kossoff wrote.

All of this has not gone unnoticed by New York City authorities. Manhattan District Attorney Cyrus Vance has reportedly started an investigation to see if Kossoff misused clients’ funds. (A spokesperson for the DA’s office declined to comment.)