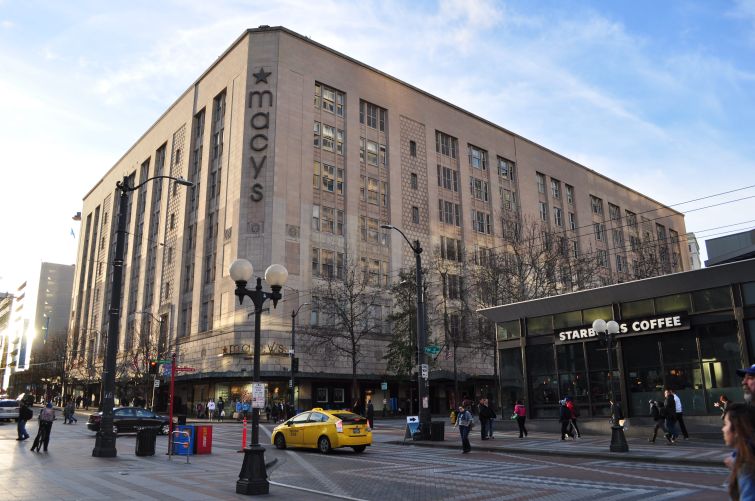 Global investment firm KKR and partner Urban Renaissance Group funded most of their $600 million purchase of the former Macy’s building at 300 Pine Street in Downtown Seattle last month with a $455 million debt package, according to ratings agency analysis of the transaction.

The joint venture announced in early April that it had nabbed the eight-story, Amazon-occupied, former department store building from Barry Sternlicht’s Starwood Capital Group for a reported $600 million.

The transaction was funded with a nine-year, $390 million, commercial mortgage-backed securities (CMBS) loan originated and sold by Deutsche Bank; a $65 million mezzanine loan; and a $152.4 million equity contribution from KKR and Seattle-based Urban Renaissance, according to Fitch Ratings’ analysis of the CMBS loan, which will pay interest at a rate of 3 percent.

KKR declined to comment on the deal. Eastdil Secured led the sale on behalf of Starwood and also advised the joint venture buyers in the arrangement of the financing, according to a press release about the acquisition.

Built in the late 1920s, the 774,000-square-foot, historic, mixed-use, office and retail building sports massive 80,000-square-foot floor plates, and it sits above the city’s downtown light rail and bus station, Westlake Station. Until the spring 2020, it had been host to a Macy’s regional flagship store for about 15 years. Amazon took it over for office use after the retailer departed.

Starwood, which began a conversion of the building to Class A office space starting in 2015, had accumulated full ownership of the property for around $183.7 from 2015 and 2020, according to a report from the Puget Sound Business Journal.

As per Fitch’s analysis of the transaction, Amazon has leased out about 88 percent of the space in the building through May 2033, and it is working out of Phases I and II — about 482,000 square feet — of Starwood’s three-phase repositioning campaign that began in 2015. Phase III spans over 198,000 square feet of space and is nearly complete. The only work as part of Phase III that Starwood hadn’t finished at loan closing is a planned, new 6,000-square-foot lobby — which is slated to be done, in full, by August — and other first-floor work that is supposed to be done this month. Starwood is obligated to finish the redevelopment and has “funded a completion reserve held pursuant to an escrow agreement among the seller, the borrower, the condominium association and a title company, for the remaining costs estimated for delivery of the new lobby,” per Fitch.

All told, Amazon should essentially completely occupy the property by the end of this year with about 5,000 employees.

With consent from the lender, Amazon actually has the power to transfer its entire lease to another potential tenant, as long as said tenant has a BBB+ credit rating and can showcase a net worth of at least $300 million, per Fitch, which wrote that Amazon could also transfer its lease to another occupant if it amends an in-place lease guaranty amount of roughly $115 million to cover its remaining base rent and any expenses under the terms of its lease.

The property, which sits at the corner of Pine Street and Third Avenue, is situated about a mile from Amazon’s global headquarters in Seattle and is close to a variety of other offices that also host the e-commerce giant.

Pine Street is a heavily trafficked area that sees more than 11.6 million pedestrians per year — although 2020 is an outlier — and Westlake Station sees almost 4.2 million transit riders circulate through the station annually, according to information from the property’s website.