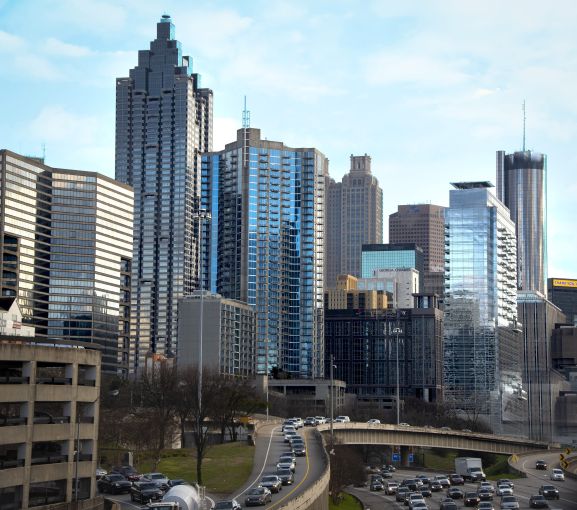 Downtown Atlanta, the city where around a third of TPG's industrial portfolio is located. Image: Getty Images

The two-year commercial mortgage-backed securities (CMBS) loan was originated and sold by Goldman Sachs and Bank of America and includes three one-year extension options. It’s secured by TPG Real Estate’s fee simple interest in 85 industrial properties and one office property that are spread throughout six states, per Moody’s. The loan closed on May 19.

The sponsor, technically, is TPG Real Estate’s third opportunity fund, TPG Real Estate Partners III, and the properties in the portfolio were compiled by Dogwood Industrial Properties, a division of TPG.

The loan is being securitized in the TPGI 2021-DGWD single-asset, single-borrower CMBS deal.

About 44.3 percent of the financing’s allocated loan amount (ALA) is dedicated to industrial properties in Atlanta, Dallas and Nashville, while the remainder is dedicated to assets in Winston-Salem, Charlotte and Raleigh, as well as Tampa, Austin and Salt Lake City.

There are 294 tenants within the portfolio, which together lease out roughly 97 percent of the 7,195,219 square feet of net rentable area (NRA) that exists across the collection of properties, per Moody’s. The largest tenant only accounts for 4.6 percent of base rent, while the top 20 make up about 36 percent.

Tenant rollover risk is real for the full, extended term of the loan, as leases covering about 75 percent of rentable area and almost 77 percent of base rents are scheduled to expire, though the rent roll is fragmented across multiple years leading up to the loan’s 2026 maturation.

Still, leasing has been strong over the last two years or so, as TPG has signed more than 2,616,000 square feet worth of new and renewal leases, accounting for more than 36 percent of NRA. Recently, in the first quarter, renewal leases that were locked in were signed at a rate of $5.31 per square foot, which is a nearly 21 percent premium on the rate at lease expiration, and new leases were being had for $6.28 per square foot, according to Moody’s.

The properties themselves are relatively small, on average — nearly 92,250 square feet — and 41.3 percent of rentable area is in assets that span, at most, 100,000 square feet. The disadvantage there is that larger industrial properties usually outpace smaller assets from a cash flow perspective for various reasons, including the fact that the larger ones typically host bigger, creditworthy companies as tenants and “offer marketing versatility through divisible space,” among other reasons, according to Moody’s.