Study says the farther an apartment is from Los Angeles, the higher its potential for rent increases in the next year 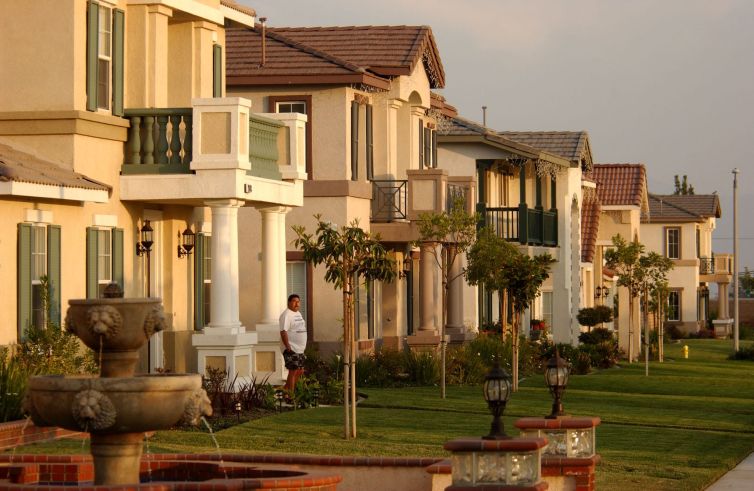 New houses line the street in in Ontario, Calif., located in the Inland Empire, the area east of Los Angeles, in Riverside and San Bernardino Counties. Photo by David McNew/Getty Images

Rents in Southern California are quickly adjusting to the pandemic-driven shifts from densely populated regions to the surrounding suburbs over the past 18 months.

The exodus of renters could bring the highest increases to suburban areas over the next year, and lower pricing in the densest areas of Los Angeles, according to the 2021 University of Southern California Casden Spring Multifamily Forecast.

Of the five regions included in the annual forecast — L.A., Orange, San Diego and Ventura counties, and the Inland Empire — L.A. is the only one with any submarkets projected to have lower rents; the report points to a projected 1.2 percent rent decrease in Koreatown. Meanwhile, there’s a projected 9.9 percent increase in the Rancho Cucamonga-San Bernardino submarket of the Inland Empire.

“The pandemic changed the behavior of millions,” said co-author Richard Green, director of the USC Lusk Center for Real Estate, which produces the annual report. “As of now, the farther one travels from the city of Los Angeles, the greater the potential for rent growth. The rise of remote working and the shuttering of restaurants and entertainment venues have made high-priced downtown living less appealing. The critical question is how many people will return to pre-COVID behaviors and when that will happen.”

The renter population in Southern California is also declining, as more people leave Southern California’s apartment market altogether. For the first time since it became a state in 1850, California’s total population decreased in 2020. At the same time, mortgage rates are at their lowest levels since just after World War II and, as a result, owner-occupied housing was more attractive than renting a downtown apartment.

Green and co-author Evgeny Burinskiy emphasized that forecasting during a time of extreme uncertainty is problematic. Typically, the Casden Forecast is a two-year projection of multifamily rents and vacancies in dozens of submarkets across five regions. But with no precedent for the current crisis, there is no way to estimate the level at which people will return to pre-COVID normalcy. As a result, this year’s forecast looks only one year forward.