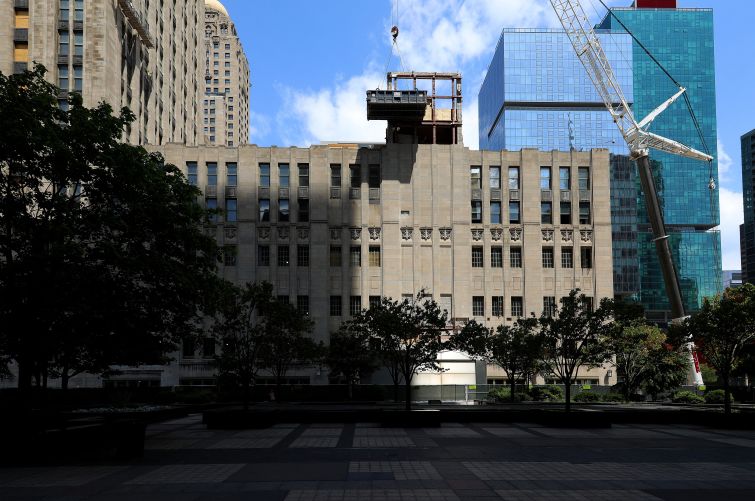 The redevelopment of The Chicago Tribune Tower in summer 2019. It's now full of luxury condos. Raymond Boyd/Getty Images

That’s because the Manhattan-based hedge fund has a reputation as a kind of Sarlacc when it comes to the assets of the newspapers that it acquires. The latest acquisitions from Tribune include nine titles: the Daily News in New York, the Chicago Tribune, The Baltimore Sun, the Hartford Courant, the Orlando Sentinel, the Sun-Sentinel of South Florida, the Daily Press and The Virginian-Pilot of Virginia, and The Morning Call of Pennsylvania’s Lehigh Valley.

Alden has devoured dozens of other newspapers and/or their buildings in the past decade, buying and selling them through subsidiaries Twenty Lake Holdings and Twenty Lake Management, according to an analysis of property records that The Washington Post released in February 2019.

The trades have run the geographic gamut, from newspaper properties up and down California to ones in Memphis, Tenn., Virginia Beach, and suburban Philadelphia. An analysis from Harvard’s Institute for Quantitative Social Science, released in early 2021, found that Alden owned at least 56 newspapers through its Digital First Media arm. It also owned, until this latest deal, 32 percent of 10 Tribune newspapers.

And many of these locations have seen property trades involving those newspapers’ assets. That’s not an accident. Alden started the asset-trade subsidiary Twenty Lake Holdings two years after it started the newspaper-acquiring wing Digital First. Alden also sometimes skips acquiring the newspaper, and instead simply grabs the real estate.

In April 2020, for instance, Alden’s Twenty Lake bought the headquarters of the Asheville Citizen-Times in North Carolina for $3.2 million from newspaper giant Gannett, and then appeared to flip it the same day for $5.3 million, according to property records.

“I think real estate is the first thing they look at,” an analyst from Huber Research Partners told the Post, which first reported the Asheville flip.

Indeed, the bid for Tribune was seen from the get-go almost entirely in terms of what Alden could extract from the company. Employees at the newspapers, including its journalists, scrambled to find other buyers besides Alden; and former employees of the hedge fund, which is exceedingly fond of gutting newsrooms in particular post-takeover, shared horror stories of life under the company.

The Friday shareholders vote even prompted the Daily News to run a scathing opinion piece declaring that it would stick around, come what may from its new owner: “Thanks for buying that condolence card, but please recycle it. If you believe in what we have done and what we continue to do, read us, in print and online. Vultures pick over dead animals. We’re alive and typing.”

Tribune did not immediately respond to a request for comment about the fate of its former assets. Alden and Stamford, Conn.-based Twenty Lakes could not be reached.

Newspaper buildings, including headquarters and printing hubs, have proven irresistible redevelopment opportunities throughout the U.S. in recent years. At least a dozen newspaper headquarters, including in Los Angeles, Boston, Chicago, Charlotte, N.C., Miami and St. Louis, have been redeveloped or replaced since 2010.

Much of this is due to where the buildings tend to be located. Back before email and other byte-sized digital communication allowed them to streamline their work, and amid more mastheads per municipality competing for the same scoops, reporters and photographers needed to be near the action. How else to easily grab the latest crime report or municipal budget pre-web? That meant headquarters close to city halls, courthouses, police HQs, hospitals, arenas and downtown business hubs.

Developers, of course, prize such locations. They also like the generally large floor plates and capacious expanses that appeal to today’s ever more important technology tenants (many of which, of course, stole the advertising thunder from traditional print media, thereby inviting the rapacity of the likes of Alden).

“These buildings were not built as buildings — these are factories,” Jim McKelvey, co-founder of mobile payment giant Square and president of the StarWood Group, told The New York Times in early 2020. “These are newspaper assembly factories.”

McKelvey’s StarWood is redeveloping the former home of the St. Louis Post-Dispatch — which included a 100-foot-long printing press that weighed up to 600 tons when fully loaded — into a hub for tech firms.

It’s unclear as of yet which assets Alden could sell off as part of its Tribune acquisition. The Chicago Tribune already sold its namesake tower in the Windy City in 2016, and left it in 2018. It was redeveloped into posh condos.

And Tribune Publishing last summer closed the offices of the Daily News at 4 New York Plaza in Lower Manhattan, as well as those of the Orlando Sentinel and the Lehigh Valley’s Morning Call (the latter of which was marking 100 years at the same location in 2020).

In 2018, The Baltimore Sun left its decades-long home in Downtown Baltimore for its printing press building in the Port Covington neighborhood along the city’s waterfront. Tribune had sold the downtown building the year before.