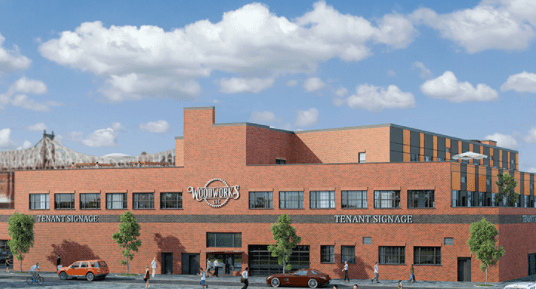 A rendering of The Woodworks LIC. Courtesy: Meridian Capital Group

MetBank extended a $17 million senior loan, and Seattle-based lender and investor Columbia Pacific Advisors made a $15 million preferred equity investment in the development, which had previously served as a factory for cabinetry and millworks for more than 40 years, according to information from Barone.

Meridian Capital Group’s Adam Hakim and James Murad sourced and arranged the financing out of the firm’s New York office, on behalf of Barone, a company that started this year with around 1 million-square-feet worth of space across completed and ongoing developments, and actively-managed sites.

The Woodworks LIC — at 9-03 44th Road in Long Island City — is specifically tailored for small and midsize businesses. It sports a couple of landscaped outdoor rooftop terraces, as well as a fitness center, a conference room area and a traditional lobby, according to Hakim and information from Barone’s website, which says that the project is the first speculative office and industrial development to be delivered to Long Island City in more than 30 years. Barone broke ground on the project in February 2018.

The development spans an entire city block that is within walking distance to the East River waterfront. It features more than 45,900 square feet of industrial space on the first floor, and nearly 47,000 square feet of office and flex office space across the second and third floors. It’s also just a few blocks away from the Court Square-23rd Street and Queensboro Plaza subway stations, which provide direct train access to and from Brooklyn and Manhattan.

An official at Columbia Pacific was not able to provide comment or additional information prior to publication. MetBank could not be reached.