Legal Marijuana May Not Be NYC’s Retail Real Estate Savior 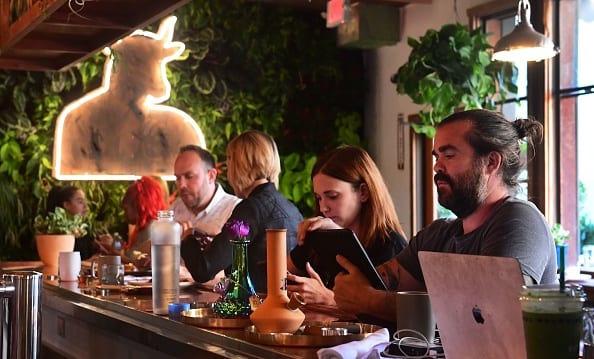 When Gov. Andrew Cuomo signed a bill in late March to legalize recreational marijuana in New York state, many in the cannabis and real estate industries thought dispensaries and on-site consumption lounges might save New York City retail. But the reality will be much more complicated.

New York’s adult-use marijuana program will be one of the most progressive in the United States — if it is implemented as it now stands — according to cannabis industry observers. The legislation, known as the Marijuana Regulation and Taxation Act, requires that the state award 50 percent of its cannabis business licenses to “social and economic equity applicants,” which include minority- and women-owned businesses and veterans, as well as people who come from communities that have been disproportionately impacted by police enforcement of drug laws. The law allows for dispensaries, on-site consumption lounges and delivery services, as well as cultivation of marijuana.

On-site consumption, in particular, is a somewhat unique concept at a national level. Even California, which in 2016 was among the first states to legalize recreational marijuana, only has a handful of businesses that successfully operate with on-site consumption. Alaska, Massachusetts and Colorado also award these kinds of licenses, but with heavy restrictions. All four states allow cities and towns to decide whether they want to permit on-site consumption and dispensaries, which realistically means that only a handful of cities in each state welcome cannabis restaurants or smoking lounges.

However, those familiar with California’s cannabis scene hope that New York will have high-end eateries that serve weed-infused food and drinks, or offer a space for customers to eat and smoke. The idea is to bring cannabis consumers a unique experience, rather than a hotboxed room.

For example, the Original Cannabis Cafe in West Hollywood, Calif., opened in October 2019 as the first legal weed cafe in the country. The eatery does not serve cannabis-infused food by default, but customers can request that the kitchen infuse a dish with THC for an extra $20. The cafe also sells weed, edibles and cannabis-infused drinks, and permits customers to smoke marijuana. Bongs are also available for rent, and are sterilized after each use.

Notably, the cafe does not serve alcohol, because California law forbids it. New York’s law has a similar provision, which means that operators of on-site consumption businesses in the five boroughs will likely have to rely on food and entertainment in order to make a profit.

“It’s like a nice restaurant that instead of serving you drinks, it serves you weed,” said Sloane Barbour, chief revenue officer of California-based cannabis recruiting agency FlowerHire. “The future becomes, ‘I want to go to a cannabis art exhibit.’ Or, ‘I want to go to a music show where I eat a cannabis-infused dinner, and then I sit on big pillows and watch jazz.’”

Barbour said that he knew a commercial broker who had found 80 retail landlords in Manhattan who said they were willing to lease to cannabis businesses.

“They said pretty much everyone they asked was not only open but very curious, interested and willing to do creative deals,” he noted. “If you’re a landlord and you have a successful dispensary in your building, they’re going to pay their rent each month. The traffic is desirable in New York City.”

But until the state issues new cannabis regulations later this year, business operators won’t know where they’re allowed to rent, in New York City or other parts of the state. The new law forbids cannabis businesses from operating within 500 feet of a school, but the city and state could draft other rules that limit where dispensaries and on-site consumption lounges can go.

A number of cities nationwide have rules that prohibit cannabis businesses near churches, parks, schools, even on main tourist drags. Some towns even draft “green zone” maps that specifically outline where dispensaries can rent.

“It would be safe to say that if a property is close to a school, church, playground or Central Park, it will not be an eligible property,” said Ryan George, CEO of cannabis property listing service 420 Property. “My theory is also that the city would want to keep cannabis stores away from historical or big tourist sites, like Times Square. Historically, that’s the way a lot of policy across the nation has gone. They try to keep cannabis off Main Street.”

Belsky explained that “you could not operate a profitable medical dispensary in New York under the current regulations. These big dispensary operators have gotten their licenses, and have just been holding onto them. They haven’t invested any money because it wasn’t profitable.”

The new law will allow patients with a much broader range of conditions, such as anxiety and depression, to apply for medical marijuana cards with a doctor’s certification.

Companies that want to build a cannabis cultivation operation will need time to obtain their licenses; build out their facilities; and grow, harvest, and distribute their crop. And it’s not easy to find a property that will work for large-scale marijuana growing.

The demand for cultivation warehouses “is already drying up a lot of industrial space,” said Donny Moskovic of Katz & Associates, a commercial broker who works with Cresco Labs, a major medical marijuana operator in New York. “Not every warehouse works for cultivation either. You need big gas lines, you need a lot of power, you need municipal water. It’s not easy finding a site for cultivating cannabis, because of the thin inventory and the requirements. Companies want to have room to grow, if they have to. Finding a warehouse space that has 30 acres is even harder.”

“I haven’t had luck putting a cannabis user in a space in any state that had debt on it over the past four years,” Moskovic said. “In Manhattan, you have these large-scale properties with massive debt on them.

“We look for condo units,” he said. “We actually condo’d our unit for a dispensary in Williamsburg, Brooklyn, in the Pod Hotel. There are very few spaces throughout the city that work.”

George of 420 Property said that he’d seen some banks “ease their stance on loans and mortgages to cannabis businesses and cannabis-occupied properties. But they’re still not able to provide assistance or loans on a huge level. You still can’t go down to Wells Fargo and get a loan for your cannabis business.”

Moskovic, however, said he was skeptical that the heavily regulated recreational and medical marijuana industry would have the power to keep New York City’s struggling retail market afloat.

“I get calls all day long from landlords who are asking, ‘Can you bring a weed guy to my restaurant?’” the broker said. “But I haven’t heard any talk about consumption lounges from my client.” He asked incredulously, “People smoking weed are going to save New York City? How is cannabis going to save retail in New York City?”