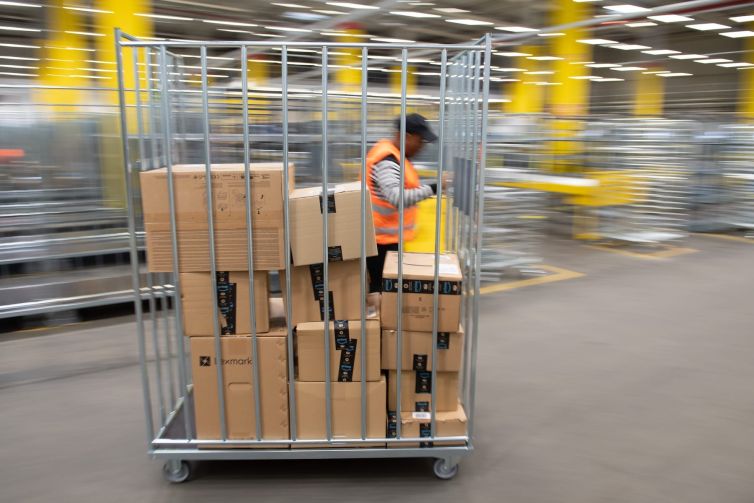 The Retail, Wholesale and Department Store Union (RWDSU), which is fighting to represent Amazon fulfillment center workers in Bessemer, Ala., filed objections on Friday to Amazon’s conduct during this month’s union election with the National Labor Relations Board (NLRB), alleging that the trillion-dollar e-commerce giant threatened, intimidated and confused workers ahead of the vote.

Employees in the warehouse voted against unionizing earlier this month, with only 738 in favor, CNBC reported. The election results could be set aside if the NLRB finds Amazon prevented its employees from making a free and uncoerced choice against unionizing, according to a RWDSU press release.

“We won’t let Amazon’s lies, deception and illegal activities go unchallenged, which is why we are formally filing charges against all of the egregious and blatantly illegal actions taken by Amazon during the union vote today,” RWDSU President Stuart Appelbaum said in a statement.

The RWDSU alleged that Amazon threatened workers through mandatory meetings and emails saying unionization would lead to a loss of business at the facility, which could lead to significant layoffs or a shutdown. Amazon told workers they would lose their pay rate, health insurance, time off and retirement benefits if they voted to unionize, and offered a severance program to encourage pro-union employees to leave, according to the RWDSU’s objection.

Jefferson County officials confirmed that Amazon changed the timing of a traffic light outside its warehouse, reportedly to prevent pro-union workers from canvassing while workers were stopped at the light, More Perfect Union reported.

The RWDSU also alleged that Amazon tried to make it appear that the corporation controlled the election process by way of placing a ballot collection box in the Amazon parking lot, and pressuring workers to bring their ballots to work and use the Amazon-installed collection box, which was located where Amazon-owned surveillance cameras could record employees dropping off their ballots. Amazon installed the box despite the fact the NLRB denied Amazon’s request for a warehouse-based drop box.

Amazon has previously faced criticism online over the treatment of its workers, when Amazon took to Twitter to deny that workers pee in bottles during delivery drives. The Intercept reported that Amazon is aware that drivers both pee in bottles and even defecate during delivery trips, according to internal company documents.

Amazon even hired police officers to patrol the distribution center parking lot to intimidate employees, according to the RWDSU. But Amazon denies the allegations, writing in a blog post that employees chose not to unionize.

“The fact is that less than 16 percent of employees at [the warehouse] voted to join a union,” a spokesperson for Amazon said in a statement. “Rather than accepting these employees’ choice, the union seems determined to continue misrepresenting the facts in order to drive its own agenda. We look forward to the next steps in the legal process.”

Either party can file objections to the NLRB five days after a union election, and the NLRB has 15 days to schedule a hearing. The hearing and decision could take weeks, or longer if the RWDSU files unfair labor practices charges.

The claims in RWDSU’s official complaint could create doubt about the secrecy of the ballot, which RWDSU said would mean the results were compromised.

Coercive behavior is prohibited by the National Labor Relations Act, which guarantees employees the right to unionization, according to the NLRB website. Along with other restrictions, employers are barred from prohibiting employees from talking about a union, polling employees on union support, spying on union activities, and threatening employees with consequences if they choose to support or engage with a union.

“Amazon knew full well that unless they did everything they possibly could, even illegal activity, their workers would have continued supporting the union,” Appelbaum said. “That’s why they required all their employees to attend lecture after lecture, filled with mistruths and lies, where workers had to listen to the company demand they oppose the union … That’s why they bombarded people with signs throughout the facility and with text messages and calls at home. And that’s why they have been lying about union dues in a right to work state.”