The West Hollywood development, which comprises a boutique hotel and luxury residences, made its debut last month 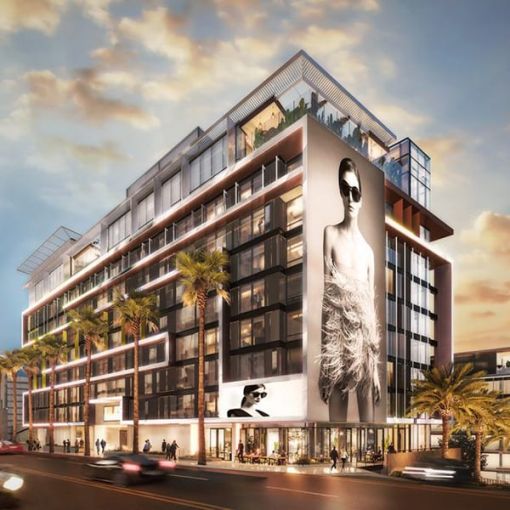 Big hospitality financings have been few and far between since the pandemic began, but a brand new property surrounded by the bright lights of Hollywood just attracted half a billion dollars.

AECOM Capital and Combined Properties have landed $505 million in financing for the Pendry West Hollywood, an approximately 300,000-square-foot development encompassing a full city block along the famed Sunset Strip in West Hollywood. The development made its debut on April 2nd.

The financing, which retires a $205 million construction loan on the property from Bank OZK, closed April 16.

The much-anticipated new development sits at the site of the former House of Blues at 8430 Sunset Boulevard, in the heart of the Sunset Strip. It comprises the 149-key Pendry West Hollywood hotel, the 40-unit Pendry Residences West Hollywood by Montage Hotels & Resorts, a music venue and seven Wolfgang Puck-led restaurants.

Both guests and residence owners will have exclusive access to hotel amenities, including a private membership club, a rooftop pool and bar, a multi-purpose live entertainment venue, a screening room, bowling alley, Spa Pendry and a state-of-the-art fitness center, as well as a curated art collection.

The hotel component abuts Sunset Boulevard, with each room offering sweeping views across L.A. and the Hollywood hills, while the 40 residences — designed by Ehrlich Yanai Rhee Chaney Architects — cascade down towards Fountain Avenue. Every residence offers private elevator access and large, expansive terraces of up to 3,400 square feet.

The development also features a large LED billboard on its Sunset Boulevard-facing facade, which will stream high-end ads from companies such as Apple and Hulu 24 hours per day.

Owned by Montage Hotels & Resorts, Pendry West Hollywood is the third location for the Pendry boutique luxury hotel brand, with the other two located in San Diego and Baltimore.

Sources close to the transaction said the financing opportunity was highly coveted, despite the transaction’s scale and the property’s lack of operating history. Interested lenders saw the true long-term value that had been created by the project’s sponsors, sources said.