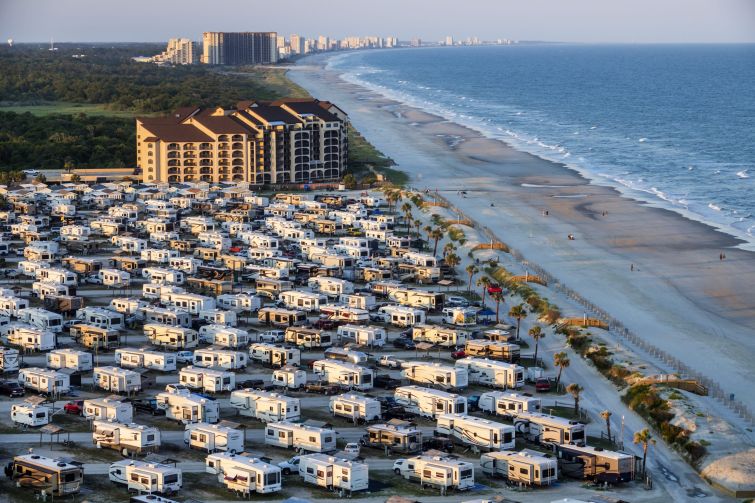 Brookfield has secured a little over $2.2 billion in debt to refinance a massive collection of manufactured housing and RV sites, according to ratings agency analyses.

Each of the four banks originated a quarter of the loan total, or roughly $551.3 million, according to data from Kroll Bond Rating Agency (KBRA). The debt was originated on April 1, and it will be securitized in the MHC 2021-MHC single-asset, single-borrower CMBS deal.

This loan retires almost $1.1 billion in existing debt, as well as $248.8 million of preferred equity, and it paid off closing costs and prepayment penalties of about $92.7 million. Brookfield also pocketed about $760.4 million of cash equity in the deal.

The financing is secured by Brookfield’s fee simple interests in 124 manufactured housing communities, containing a combined 29,086 “pads” that hold the mobile homes, as well as 771 RV resort sites that are located throughout 13 states, according to KBRA. The appraised value of the entire portfolio is just north of $3 billion.

Denver; Orlando, Fla.; Salt Lake City; Greeley, Colo.; and Ogden, Utah are the top five markets where the properties in this deal are located, and they make up 53 percent of the allocated loan amount.

While RV sites represent a much smaller portion of this transaction than the many manufactured housing slots that headline the collateral securing the loan, interest in — and sales of — RVs as a result of the pandemic has ballooned. Overall, despite the pandemic, rent collections have been strong and stable within this portfolio. In February 2021, collections over the previous 12 months averaged 95 percent.

Most of the individual manufactured homes — 90 percent — are owned by the occupant; the ground, or pad, on which it sits is leased out by Brookfield, who owns the remaining homes. The rate of homeownership on the pads has jumped slightly, from 88.7 percent at the start of 2020, before the pandemic. The entire portfolio is about 88.5 percent occupied as of this spring, and it benefits from long-term tenancy. Occupants within the bundle of properties tend to reside in their homes, or on their respective pads, for 15 years, on average — greater than the subsector’s average of 14 years, according to Fitch.

Brookfield has injected about $4.3 million into the portfolio in the last year, amid the pandemic, per Fitch. Most of the work that was done included upgrading site clubhouses, landscaping and pavement surfaces, as well as playgrounds and recreational areas.

An affiliate of Brookfield Asset Management acquired the collateral in this deal in March 2017, as part of a larger deal that included the purchase of 135 manufactured housing communities from NorthStar Realty Finance Corporation and RHP Properties. As part of that deal, Brookfield subsequently partnered with RHP, who retained a 5 percent ownership interest in the portfolio and stayed on to manage day-to-day operation of the properties.