Yes, there have been big discounts on real estate during the coronavirus era. But they might just be getting started. 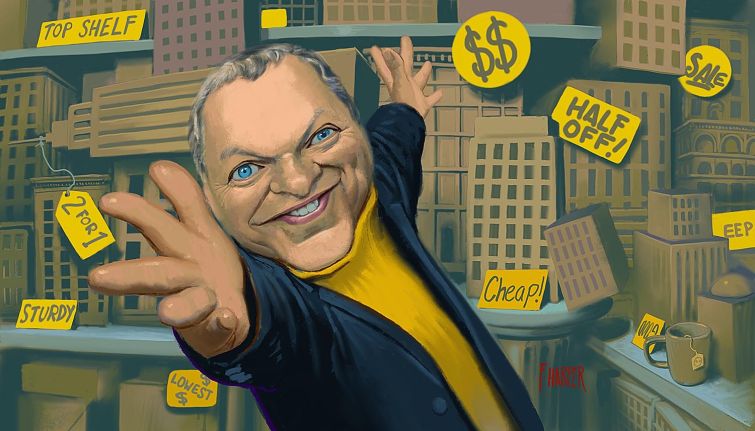 There have been big discounts on commercial real estate during the coronavirus pandemic, and they could just be getting started. Illustration: Fred Harper

With case numbers falling and vaccinations on the rise, there is a chance (cross your fingers, knock on some wood, do whatever you have to do) that we could be approaching the beginning of the end of the COVID-19 pandemic.

The age of the COVID-19 bargain in commercial real estate, on the other hand, might just be getting underway.

“I think it has just started,” said Jeffrey Simpson, managing partner at Arch Companies, suggesting that, especially in New York City, underlying market weakness that the pandemic exacerbated would lead a growing number of owners to sell at a discount.

“I’ve met so many people who were hopefully optimistic and said, ‘Well, things always get better in New York, so we’ll just refinance, and hold on, and pay a little higher interest rate, and things will get better,’” he said. “I think in the last six months, a lot of folks realize that just isn’t true, and that things are going to find a bottom and no one knows where that bottom is.”

That’s not to say there hasn’t been some discounting already. For instance, as Commercial Observer reported at the end of 2020, Simon Property Group scored a nearly $800 million discount on its purchase of an 80 percent stake in fellow mall operator Taubman Centers. Simon acquired its rival for $43 per share, well below the $52.50 per share it agreed to pay for Taubman in February 2020. Simon tried in June to get out of the deal, citing the pandemic-driven carnage in the retail sector.

Last week, too, Extell Development sold a 42 percent stake in its rental buildings at 555 10th Avenue and 510 East 14th Street to RXR Realty, the Financial Times reported. The FT said it sold at a 20 percent discount on the valuation pre-pandemic, but a source CO spoke to said it was closer to 10 percent. Still, real money.

This week also brought news of another potential price cut in the making, as CO reported that Silverstein Properties has offered to purchase half of All Year Management’s Denizen multifamily development in Bushwick, Brooklyn, for $200 million. That would be a discount of 22 percent on the $257 million value initially placed on the building’s Series E bonds, which are secured by the property’s first mortgage.

Numbers from the Real Estate Board of New York’s investment sales report for the second half of 2020, likewise, suggest discounts are rife or at least that sellers are willing to take a serious haircut. In those final six months, the average price of investment sales citywide was down 26 percent year over year, while transactions were down 21 percent and monetary sales volume declined 47 percent. The average price for elevator multifamilies, for instance, fell 47 percent annually, while the average price of office transactions was down 37 percent.

Discussing the Extell deal, RXR President Michael Maturo said the company was currently working on a number of similar transactions throughout the New York area, where it saw opportunities to buy in at a markdown.

“Situations where the developer, owner, operator, is doing more portfolio-type of management in terms of refinancing, recapitalizing multiple properties, looking for liquidity, and stepping in where we can buy or make significant equity investments in assets in the midst of that kind of recapitalization,” Maturo said.

In the case of Extell, hard times in the high-end condo market likely drove its decision to make the deal with RXR. The company is nearing completion of its supertall, 179-unit Central Park Tower along 57th Street’s Billionaires’ Row, and is selling units at its One Manhattan Square and Brooklyn Point luxury condo high-rises as well.

“The condo side has seen a lot of stress during the pandemic, there’s no secret about that,” Maturo said, noting that the other situations RXR was exploring were similar to the Extell deal, where it would buy into the rental side of a business that was looking to shore up its condo portfolio. (Extell Chairman Gary Barnett was unavailable to comment for this story.)

Simpson said that, in recent months, Arch has fielded a growing number of offers for discounted condo inventory.

“People are saying, ‘Hey, 50 percent of these condos are available, and we’ll sell them to you at 30 or 40 percent off the sticker price,’” he said.

He noted that, by and large, he has found these offers underwhelming. “It’s irrelevant where the pricing was, it’s like, what’s the new price?” he said.

Those 30 to 40 percent price cuts are a notable increase over what Simpson said he was seeing at the beginning of the pandemic, though. At that time, discounts “were very small … 5 percent, 10 percent tops,” he said.

“You are seeing the end of the leniency from early in the pandemic, when people were giving some time, and some wiggle room, and some short-duration extensions to see how the chips fell,” he said. “You are starting to see the transactions that have burned through that wick of extended time and not ended up in a great spot, with regards to value as compared to their existing capital structure.”

Ross noted, though, that the availability of financing was pushing back against fundamental issues like occupancy and net operating income declines.

“Because of the amount of capital in the system, because of the amount of dry powder across the industry, what you are seeing more and more, rather than distressed transactions, is additional capital coming in the form of debt or equity or preferred equity to help bridge any gaps,” Ross said. “And I think that, part of that, is that with rates and yields being so low, the return thresholds for different players in the capital structure are drastically lower.”

“True fundamental value on a lot of assets is down,” he added. “But, whenever financing is wildly available and cheaper, assets are just worth more. And real estate is included in that.”

Simpson said that Arch was focused primarily on deals for multifamily with an affordable component, but added that it was considering all asset classes.

Maturo said that, compared with multifamily, RXR hadn’t seen many opportunities in the office market. He attributed this to a lack of clarity around what demand for office space would look like going forward as well as the fact that, in many cases, office buildings haven’t yet faced the full impact of the pandemic.

“Generally speaking, in a multi-tenant office building, your [annual] rollover is limited to 7 or 8 percent on average,” he said. “It’s not like, in the year we’ve had here, you’re going to roll off 20 percent of your tenant base.

“I think that the market hasn’t yet faced real distress, because there has been flexibility provided by the banks and lenders and also equity investors realizing that you don’t want to sell into a pandemic,” he added of office buildings.

“Now, that can only last so long,” Maturo said, noting that RXR expects to see opportunities on the office side on the other side of the pandemic.

“People will come back to work, and we’ll see where the economy kind of lands and what demand is going to be,” he said. “All those dynamics will come into place and people will need liquidity, and trading will start and things will come together. But, it’s just not there now.”

Maturo said that when the office market loosens, RXR plans to pursue situations similar to the Extell deal, where it has a pre-existing connection with the owner or project. RXR owned mezzanine debt on 555 10th Avenue and 510 East 14th Street.

“A number of them are relationship situations, where we either have an existing relationship through a mezzanine loan or a preferred equity investment already, or it’s just somebody that we have a relationship with from doing business with in the past, where we can step in and provide efficient capital that has a lot of flexibility, and that allows us to potentially buy into value,” he said.

Maturo said he believed that this is what appealed to Extell.

“We were already involved in the buildings and it made what is usually a complex transaction with multiple moving parts and multiple vendors and so forth somewhat easier to get done,” he said.

As for the discount RXR received relative to pre-pandemic pricing, Maturo said it partially reflected a real drop in the properties’ current value and partially Extell’s current need for funds.

“It’s a combination,” he said. “Obviously we’re in a down cycle … but there are players that need liquidity to address issues in their portfolio.”

Even at a discount, some properties are still too expensive, Simpson noted.

“It’s really just a function of concessions and rents, and how much in negative carry costs are going to be required to get through the remainder of the storm,” Simpson said. “It really just depends asset by asset and location by location.”