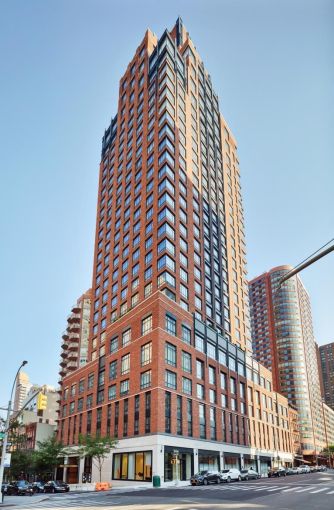 The Kent at 200 East 95th Street in the Upper East Side. Courtesy: W&D

Global investment firm GTIS Partners has provided a $146 million condominium inventory loan to a partnership between Extell Development and CL Investment Group for nearly half of the 104 residences comprising The Kent in the Upper East Side, Commercial Observer has learned.

The two-year, interest-only and floating-rate mortgage includes two six-month extension options, and finances 49 luxury condo units within the 30-story development, allowing the Extell and CL joint venture more time following the completion of the project to sell those units.

The Kent, located at 200 East 95th Street with an alternate address of 1681 Third Avenue in the Upper East side, sits just a block away from the 96th Street 6 and Q subway stations. It topped out in 2017 and construction officially wrapped the next year, according to information from CoStar Group. The project received its temporary certificate of occupancy in January 2019, records show.

Of the 104 condos within the Art Deco tower, 83 are market-rate units and 21 have been deemed affordable, with a mix of floor plans from studios all the way up to five bedrooms. There are 17 studios, 35 one-bedrooms, 27 two-bedrooms, 16 three-bedrooms and 12 five-bedroom layouts, averaging 1,776 square feet, per CoStar; there are also three penthouse residences included within this bundle.

The market-rate units were designed by renowned New York-based designer Champalimaud Design, the firm that designed the interiors of The Hotel Bel Air, The Waldorf Astoria and The Carlyle Hotel, per information from Extell marketing materials.

The roughly 321,000-square-foot development’s exterior was designed by architectural firm Beyer Blinder Belle, and the project sports three floors of amenities, including a fitness center, an indoor pool and infrared sauna, a sound lounge, a drawing room and an outdoor children’s playground.

Online listings have three-bedroom, roughly 1,900-square-foot condos ranging from $4 million to around $4.5 million, according to StreetEasy. Currently, four-bedrooms units spanning just over 2,700 square feet can be had from $6 million to $6.2 million; while some five-bedroom, 3,500-square-foot units are going from anywhere around $7.1 million to nearly $11 million.

Several residences have been sold at discount amid COVID-19, which has wreaked havoc on the city’s luxury residential scene. A 2,735-square-foot, four-bedroom unit sold for 18.1 percent below an asking price of just over $6 million in mid-January, according to listing and sales information from PropertyShark and StreetEasy.