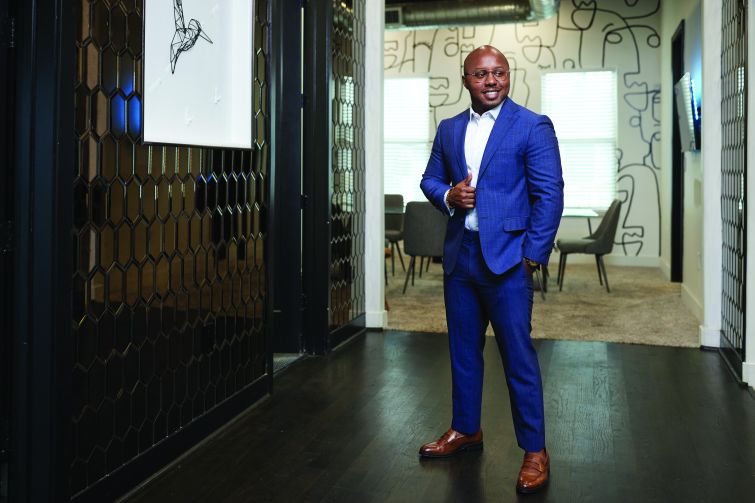 Chris Senegal pitched 23 lenders on his first development plan: a townhouse development in the Fifth Ward in Houston.

This was in 2016. Senegal — a self-made real estate investor — had been flipping houses since 2008 under the name Invictus Properties, and had amassed a small rental portfolio in the Houston region. But he started to realize that the work he was doing — knocking on doors to convince homeowners to sell, and then marking up the renovated home — was having an impact on the people, the neighborhoods, and the communities in which he was operating.

“I saw a lot of investors of all ethnic backgrounds all actively investing in these communities, but nobody really looking out for the community, or being cognizant of what’s going on when you make the certain investment decisions you make,” said the 37-year-old Senegal.

So, when a development opportunity arose in the Fifth Ward, Senegal thought of it a chance to find a better model for investing in underdeveloped communities. “My whole mission is finding ways to revitalize, rebuild, invest, without the negative impact that usually comes along with gentrification and revitalization.”

Senegal purchased the first development site, a full block at 2507 Des Chaumes Street with a vacant grocery store, in 2013, and held it for a few years. At the time, the surrounding area was underdeveloped and the neighborhood was known for crime, poverty and drugs. Senegal had trouble finding a tenant for the grocery store because the demographics didn’t support it, he said.

Senegal now has three projects in the Fifth Ward, each different, but each designed to revitalize the neighborhood, make a profit, and bring wealth to the community. He’s building homes for young professionals; has crowdfunded from the community to purchase a rental complex in order to keep the rents stable; and recently purchased a church, where he plans to build more housing.

However, even he’s not sure that what he’s doing is replicable, since each deal is unique. But he said he’s trying to do his part to think about ways to profit from real estate development, without causing displacement.

“I spoke to a lot of people about it, and everyone was great at restating the problem, but nobody really had a solution,” Senegal said. “Everybody’s kind of saying, you know, just leave the neighborhood alone, or be a part of the problem.”

For decades, Fifth Ward was considered one of Houston’s most dangerous pockets. Back in 1968, Juke Boy Bonner immortalized its dangers with his song, “Stay Off Lyons Avenue,” the neighborhood’s main corridor. A decade later, a Texas Monthly article described the Fifth Ward as “Texas’ toughest, proudest, baddest ghetto.” Today, the median income is half that of Houston’s overall, some schools have a student body with a poverty rate over 90 percent, and just 4 percent of residents have a college degree or higher.

“Fifth Ward used to be the ‘hood,” said Odis James, a real estate investor from the San Francisco Bay Area, who has invested with Senegal. “How did the ‘hood get made? We didn’t make them.”

Freed slaves populated the Fifth Ward after the Civil War; one founded its oldest church in 1865. When the area was given its name in 1866, it was half-Black and half-white, with a total population of about 1,100 people. By the 1920s, it was predominantly Black and the center for Black life in Houston, with vibrant business, retail and entertainment on its streets.

But, even then, because of Jim Crow-era laws that often prevented Black people from owning land, most people rented, rather than owned, their homes. In the post-World War II era, as cities suffered nationwide, the neighborhood began to decline, and, with the arrival of desegregation, more affluent members of the community were able to move out, depressing the neighborhood further.

Then came the turning point.

In 2016, one of Houston’s biggest developers, Midway, announced that it would be building a massive, 150-acre development in the greater Fifth Ward area, along the Buffalo Bayou. The site was less than a mile from the land Senegal had acquired in 2013. “For me, that was kind of the aha moment,” Senegal said. “When redevelopment comes to a community, instead of fighting it, you can say, ‘Hey, there’s a way for me to benefit, and there’s a way for me to help other people benefit from it.’”

That’s when he decided to build a townhouse development on the site, to attract higher-income professionals to the neighborhood — potentially, young Black professionals looking for starter homes. “My goal was to bring higher incomes back to the community,” Senegal said. “If you really want to bring a community back to life, you have to bring the rooftops that have higher incomes back. And the only way to do that without displacing people is to do it on property that isn’t owned by someone.”

Senegal financed the project with a loan from the 24th lender he approached: a hard-money lender out of Austin, who had previous experience lending in emerging markets. Construction began in 2020, and five out of the 14 homes are now completed and sold.

“Chris strategically had to place [the homes] in a budget where the average young professional or young family who wants to live in the city could afford it,” said Porshae’ Brown, the broker for the development. “Because he could sell them for more.”

“One of the things that he had in his mind was his own ideal buyers, and not pricing the ideal buyer out of the market,” Brown continued. “He’s still able to profit, but it’s not as high of a profit that he’s pushing people out of this area.”

The Bay Area-based James, who runs James Street Capital, purchased one of the homes as an investment, site unseen. He had been looking to expand outside of the Bay Area in Black communities. “I wanted to look for places that had historical significance,” James said. “I was looking at every place where Black folks were massacred when they started to establish their own communities.” In other words, places with a history of Black success, places that could be built back up.

When he heard about Senegal’s project, he wanted in, and closed on a home in August of last year. “You don’t see a lot of people who look like us doing this,” James said. “He’s setting a good example.”

The history of a neighborhood matters a lot when it comes to gentrification. “It’s what gives it the cache that makes it attractive to gentrifiers,” said Matthew Schuerman, the author of a book on the subject. “In this case, a historically Black neighborhood would be really appealing to upper middle-class, Black professionals in Houston.”

Senegal’s next property is on Lyons Avenue itself. It’s not a development site, but a rental complex, with 18 rental homes, many occupied by seniors and longtime residents, and two commercial properties. When an opportunity arose, Senegal purchased it with a plan to keep the rents stable, and to use the commercial properties as a value-add component.

“If you really want to control the rents, the only way to do that is actually be the landlord,” he said. “And if you’re in an area where the values are, you know, appreciating quickly and extensively, then you’re going to get a great return on your investment just for the value appreciation; you don’t have to focus so much, specifically, on the cashflow.”

On top of that, Senegal opened up the project to small-time investors on the crowdfunding platform, Buy The Block. “We no longer have to sit on the sidelines as our communities are gentrified,” the offering page states. “We can participate in the revitalization and preserve the heritage created by existing residents.” The offering allowed investors to come in at a minimum of $250, with shares priced at $50 a piece, and promised income distributions twice a year. It raised $1.07 million, the maximum allowed for that type of offering, from 1,651 investors, per the offering page.

Brown, the realtor, was one of the investors. “When the opportunity came to buy five shares of a portfolio, I definitely wanted to take the opportunity to get in on that,” she said. “I can hold on to it for the long term.”

Senegal had initially hoped to lease one of the commercial properties to Thoroughbred Coffee, a Black-owned business with one location elsewhere in Houston. Because of the pandemic, he pivoted, and is renting it out by the hour through the platform Peerspace. According to the listing, the property was formerly a home built in 1925, one where Aretha Franklin, Tina Turner and James Brown — who were in town to perform at the local clubs along Lyons Avenue — would be hosted.

Senegal’s most recent project is on a much larger scale. The developer plans to build a 245-unit apartment on the site of a historic church, which was planning to downsize its campus. The units will target higher-income professionals, but, because it’s the site of a church, it won’t be displacing anyone, Senegal said. It will also include a 12,000-square-foot business accelerator to help early-stage entrepreneurs grow their companies.

While a project like that isn’t directly displacing existing tenants, it can cause rents and home prices to rise.

Schuerman, author of “Newcomers: Gentrification and Its Discontents,” said it’s hard to evaluate whether Senegal’s projects are the best way to stave off displacement, especially since it’s largely based on his word. “He says he’s going to keep [the rents] low,” Schuerman said. “I rather he have some subsidized loan from HUD [Department of Housing and Urban Development] that requires him to keep rents level, so there’s some accountability.”

Another crucial way to anticipate gentrification is to support local businesses, and help them adjust to the newcomers, said Scheurman, since that keeps jobs and income  in the community. That could be a better use of resources for a lone landlord or developer.

That being said, there’s also a possibility that there’s a market advantage to being seen as a community-oriented developer, much like green buildings may cost slightly more to build, but can command higher rents because of that distinction, Schuerman said. “What it really indicates is the desire, from a small set of developers and investors, to do some low-impact gentrification.”

James said he does think Senegal’s model is replicable, but it comes down to who’s doing it, and why. “It really depends on the developer,” he said. “It’s the heart of the developer.”