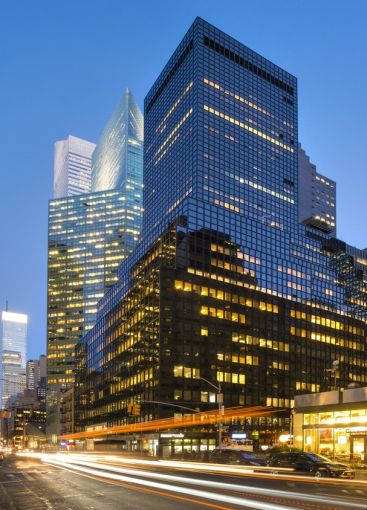 Officials at Paramount and Oaktree didn’t immediately return requests for comment. Aareal officials couldn’t be reached. A spokesperson for C&W declined to comment.

The 746,280-square-foot, Class A office asset is located between 51st and 52nd streets and boasts panoramic views of the Manhattan skyline. Built in 1958, the Sylvan & Robert Bien-designed, 35-story tower is 85 percent leased to a solid tenant roster, including anchor tenant Cornell University. Building amenities include two levels of below-grade parking, a New York Sports Club on the second floor, and a Maison Kayser on the ground floor.

Last month, Hertz Herson announced it would move its offices within Midtown to 575 Lexington Avenue, as reported by CO. The accounting firm signed a 12-year lease for 9,763 square feet on the entire 34th floor.

Normandy Real Estate Partners — prior to its acquisition by Columbia Property Trust — acquired the 1950s-era property alongside investor New York Life Insurance Company, for $360 million in October 2012, according to data from CoStar Group. A recap in August 2015 saw the exit of New York Life and the entrance of Angelo Gordon and George Comfort & Sons. Today, ownership comprises Angelo Gordon, George Comfort and a fund  advised by CREM, a subsidiary of Columbia Property Trust.

In recent years, ownership has invested roughly $40 million in the renovation of the property, including its lobby, elevators, mechanical systems and pre-built suites.

The owners had explored a potential sale of the asset back in January 2020, as first reported by CO. Its refinance is one of the largest office financings to close post-COVID.

Earlier this month, Oaktree also teamed up with J.P. Morgan to finance CIM Group‘s 1440 Broadway, with Oaktree holding the $100 million B-note in the $400 million deal.

And Paramount Group is no stranger to 575 Lexington Avenue. Its Paramount Group Real Estate Fund VIII provided a $415 million refinance for the asset back in 2018, in a transaction that was also arranged by the C&W team, as first reported by CO.