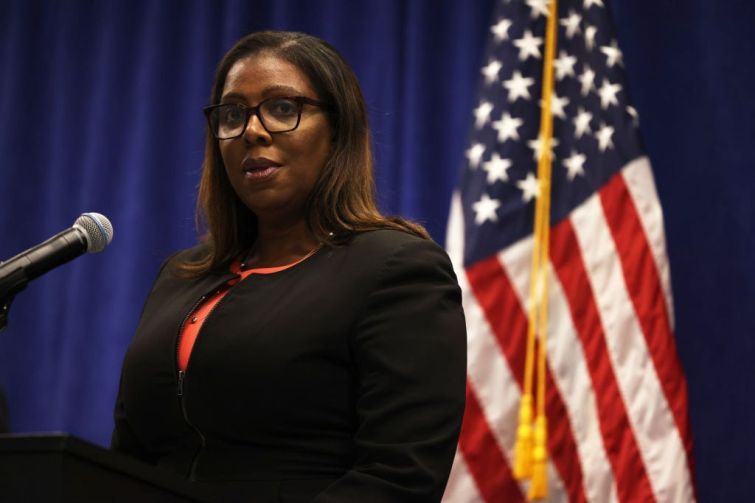 James’ suit, filed Tuesday in Manhattan Supreme Court, claims Amazon failed to disinfect portions of a Staten Island warehouse after an employee tested positive for coronavirus, had a “deficient” contact tracing procedure, and wrongfully fired a worker who brought up safety concerns to the company.

“While Amazon and its CEO made billions during this crisis, hardworking employees were forced to endure unsafe conditions and were retaliated against for rightfully voicing these concerns,” James said in a statement. “Since the pandemic began, it is clear that Amazon has valued profit over people and has failed to ensure the health and safety of its workers. The workers who have powered this country and kept it going during the pandemic are the very workers who continue to be treated the worst.”

An Amazon spokesperson said in a statement that James’ suit doesn’t show an “accurate picture” of Amazon’s safety protocols at its warehouses.

“We care deeply about the health and safety of our employees, as demonstrated in our filing last week, and we don’t believe the attorney general’s filing presents an accurate picture of Amazon’s industry-leading response to the pandemic,” Kelly Nantel, a spokesperson for Amazon, said.

Amazon took flack early on during the pandemic over the protections given to its warehouse workers across the city. In March, Chris Smalls, a management assistant at Amazon’s Staten Island warehouse, led a strike outside the facility to demand better cleaning protocols after coworkers tested positive for COVID-19. Smalls was fired days later, which he called retaliation for his protest, and James launched a probe into the site.

In the suit, James claims that at least 250 employees at the Staten Island warehouse tested positive for COVID-19, yet more than 90 of them were still in the facility within seven days after Amazon was notified about the diagnoses. The suit alleges that in all but seven of those cases, Amazon didn’t close the portions of the facility where those staff members worked so the areas could be cleaned.

James also said that Amazon’s contact tracing program “consistently” failed to notify workers who came in close contact with employees who tested positive for the virus.

Despite the pandemic, James’ suit claims that Amazon still disciplined workers based on their productivity rates in the warehouse, which “significantly limited” their ability to “maintain social distancing, clean their workstations and engage in sanitary and hygienic practices.”

Aside from Smalls, Amazon also issued a “final written warning” to Derrick Palmer after he raised concerns over the safety protocols at the Staten Island warehouse.

Last week, Amazon filed its own suit against James, accusing the attorney general of overstepping her “legal authority” by launching a probe into its warehouses. In its suit, Amazon claimed a New York City Sheriff’s Office inspection on March 30 found the company went “above and beyond” COVID-19 requirements at the Staten Island site.

James’ suit calls for Amazon to change its health policies at its New York warehouses and undergo monitoring to make sure they’re being followed. It also is seeking back pay and damages for both Palmer and Smalls, and for Amazon to reinstate Smalls to his post.

Finally, it demands Amazon surrender the estimated $28.5 million in profits it made at the Staten Island warehouse and one in Queens during the pandemic.

In its suit last week, Amazon called James’ demands “exorbitant” and claimed the attorney general doesn’t have the ability to regulate workplace safety. Amazon added that it already put in place much of the safety measures demanded by the attorney general.