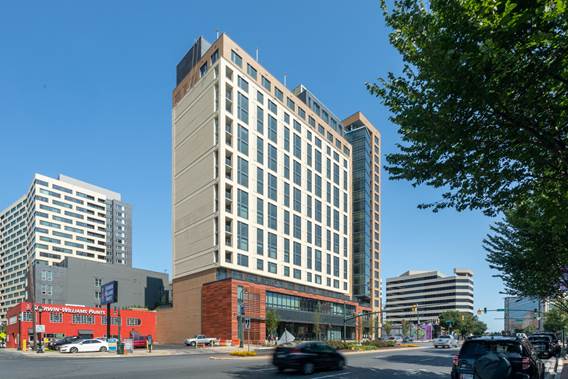 The 10-year, fixed-rate mortgage retired existing construction financing on the property, which is located at 8250 Georgia Avenue, a major thruway that runs through Downtown Silver Spring. The deal closed on Feb. 9.

Solaire 8250 — completed in the spring of 2019 — stands at 20 stories and spans 470,000 square feet, including 15,000 square feet of ground-level retail space, according to WPC’s website. It comprises 338 luxury studio, one- and two-bedroom residences and sports a rooftop swimming pool, a fitness center, a club room with a conservatory, and a courtyard with barbecue spaces. It also has three levels of subterranean parking.

The property’s location puts it within about a quarter-mile of Silver Spring’s MARC metro rail station and around six miles north of the heart of Washington, D.C.

The property was officially delivered to market in summer 2019 half-leased, according to a report at the time from GlobeSt. WPC did lock in its first commercial tenant around that time as well, signing HSBC Bank to 2,000 square feet. The company also signed Indian restaurant Spice Street to occupy space on the ground floor, but it had struggled to get its space up and running due to COVID; it eventually opened for carryout and delivery in early December.

Solaire 8250 is one of a handful of Solaire-branded properties from WPC and is its second in Silver Spring, alongside the 403-unit, $163 million Solaire 8200 Dixon in the city’s downtown, on which it broke ground in April 2020. The firm also secured life company financing for that project — a $92 million loan from AXA. Solaire 8200 Dixon marked WPC’s fifth Solaire-branded asset.