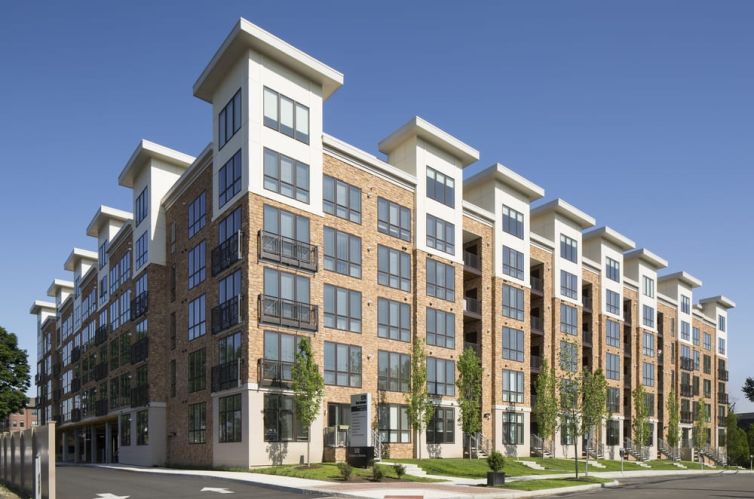 The Berkeley at Waypointe and Quincy Lofts. Courtesy: JLL

Invictus Real Estate Partners has secured just over $55.8 million in agency debt from JLL in order to fund its purchase of a multifamily property in Norwalk, Conn., Commercial Observer has learned.

The Freddie Mac-backed financing goes toward the acquisition of The Berkeley at Waypointe and Quincy Lofts, a 198-unit rental complex with addresses at 30 Orchard Street and 500 West Avenue, just south of Norwalk’s city center and just a few blocks from the banks of the Norwalk River.

JLL Capital Markets was tapped on behalf of New York-based Invictus to arrange and originate the loan, while the debt will be serviced by JLL Real Estate Capital, an arm of the firm that holds designation as a licensed Freddie Mac lender under the agency’s Optigo program. Scott Aiese, Peter Rotchford, Alex Staikos and Brendan Collins from JLL Capital Markets arranged the debt.

“The Berkeley at Waypointe and Quincy Lofts are highly attractive multi-housing assets with Class-A amenities and easy access to New York City,” Aiese said in a statement. “The two properties will benefit from the growing population of renters seeking alternatives to New York City that offer high-end amenities and a dynamic community of nearby restaurants and retail.”

JLL is one of a number of traditional brokerage houses that have expanded to include an agency lending platform, putting them directly in competition with many of the lenders with which their respective advisory practices have worked alongside or served. Newmark has established such a lending platform, and Meridian Capital Group, one of the largest commercial real estate debt and equity advisory firms in the country, recently bought Barings Multifamily in a move to enter the fray of direct multifamily agency lending.

As a relatively new, two-building development that was constructed in 2017, the site includes The Berkeley, a five-story, 129-unit property with more than 10,000 square feet of street-level retail space and a parking garage with 371 spaces, as well as Quincy Lofts, a second, five-story building with 69 residences and 87 parking spaces on the ground floor, according to information from JLL.

The broader name of the project is tied to a sizable 464-unit, mixed-use rental development called The Waypointe that is adjacent to The Berkeley and Quincy Lofts at 515 West Avenue. Invictus bought The Waypointe in August 2020.

The location of the asset provides for about an hour drive into Manhattan, and also for access to the Metropolitan Transportation Authority’s Metro-North Railroad South and East Norwalk train stations.

Current monthly rents at The Berkeley at Waypointe and Quincy Lofts range from around $1,700 for one-bedrooms to about $5,400 on the upper end for two-bedroom apartments, according to listing information on Apartments.com.