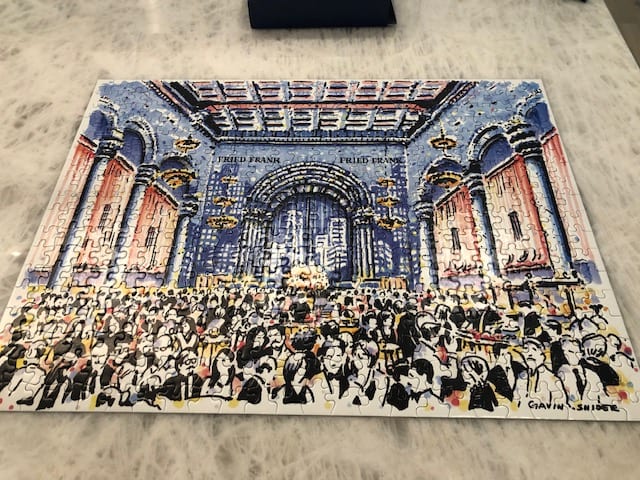 Courtesy of Todd Kahn, Tapestry, Inc. - “My Family and I loved working on the puzzle over the holidays. The food here wasn’t as good as Cipriani and I won’t admit to how long it took us to complete, but it did remind us of our friends and colleagues that we miss seeing in person. I am looking forward to next year and the extra hours I will regain!”

“Every year, all of the movers and shakers in the real estate industry have a great time there, because they meet people they are either doing deals with, want to do deals with, or have done deals with,” said Jonathan Mechanic, chairman of Fried Frank’s 100-plus attorney real estate department and the man behind this grand tradition, which started 25 years ago at the former 21 Club before moving to Cipriani in the mid-aughts. “There’s a lot of business that gets done in that room while people have a blast seeing one another.”

But when the COVID-19 pandemic caused the celebration to be canceled, the firm needed a way to spread the same boisterous holiday cheer and goodwill without requiring anyone to leave their home.

“Fried Frank’s holiday party has been one of the main events of every holiday season for as long as I can remember, bringing together the entire real estate community,” said Lauren Hochfelder, head of the Americas and deputy CIO at MSREI. “It was one of the most missed events of the year.”

With the party out of the question, many interesting options were considered and then discarded, including hosting the event over Zoom.

“First, we tried to figure out how to get 1,300 people on a Zoom [meeting],” said Valerie Kelly, one of Fried Frank’s real estate partners. “We thought, maybe we’ll cut the number of people down. We talked about having separate rooms off a virtual platform. But it seemed too complicated and didn’t create the ‘vibe’ we were trying to achieve.”

The idea was raised to maybe have an artist do a rendering of the party and send it out as a holiday card. From there, that evolved into turning that rendering into a jigsaw puzzle and sending that out to the industry. This was the clear winner.

“We felt that, since everyone is spending more time at home these days, having a jigsaw puzzle would be a fun activity for families over the holidays, and it would also be a nice reminder of how the party brings people in our industry together,” said Fried Frank real estate partner Rob Sorin, who, like Kelly, Mechanic and other partners in the group, was heavily involved in this year’s gift and contribution plans. “It was a great team effort.”

The firm hired Gavin Snider, a Brooklyn-based artist and illustrator, to draw the Cipriani holiday party from photos of celebrations past. They went through several drafts to ensure that people got a sense of the sheer mass of the event, with more than 1,300 CRE professionals filling the room.

There were also certain details Mechanic viewed as essential due to their role in the annual tradition.

Once the final result was set, Fried Frank commissioned around 1,000 orders of 432-piece jigsaw puzzles and sent them to people on the invitation list who had provided their home address, or a contact for where they were staying during the pandemic.

“That added a whole other layer to the planning, because we couldn’t just send the puzzles to the office addresses we had on file,” said Fried Frank real estate partner Michael Werner. “We wanted people to enjoy this in the comfort of their own home.”

In keeping with the holiday spirit, the partners also felt that a charitable contribution was in order and spearheaded a $25,000 donation from Fried Frank to Breaking Ground, an organization that supports and finds housing for homeless New Yorkers.

The reaction to the puzzle and the donation was even greater and warmer than Fried Frank had anticipated.

“The responses were awesome,” said Mechanic. “One CEO sent me an email with a photo of the finished puzzle saying, ‘You now owe me two full days of legal work, because you’ve taken two full days of my vacation with this puzzle.’ Someone else sent a photo of his two-year-old with 432 puzzle pieces around him, looking very confused. It was absolutely adorable.”

Fried Frank received accolades on the puzzle from throughout the real estate industry.

“The puzzle brought back fond memories of past parties, and an excitement for those yet to come,” said Michael Franco, president of both Vornado Realty Trust and Breaking Ground. “Coupled with the generous donation to support Breaking Ground in providing housing to vulnerable New Yorkers, Fried Frank succeeded in making this yet another memorable holiday season, while also having a lasting impact on those most in need in our community.”

“I loved the puzzle and, given the pandemic, thought it was a very clever idea in lieu of a social event,” said Gerald Blume, senior vice-president and chief legal officer at Rockefeller Group. “It gave us all something to do that was a little bit like being at the party without the crowd. I also think the donation to Breaking Ground was a phenomenal gesture and is necessary now more than ever.”

“The party is a true institution, and a part of the holiday season that everybody in our industry looks forward to and hopes they get an invite to each year,” said Tom Flexner, vice chairman and global head of real estate at Citigroup. “Without the party, it’s like having Christmas without Santa Claus. This year’s holiday party alternative was a superb testament to the Fried Frank team’s ingenuity with respect to both the puzzle and the generosity of their contribution to Breaking Ground.”

While it’s hard to replicate the experience of 1,300 people schmoozing and connecting in one of the most luxurious party palaces in New York City, the response to the puzzle — which Mechanic emphasized is a one-time thing, as he optimistically anticipates a return to Cipriani this year — made it clear that the sense of personal connection Fried Frank hoped for came to fruition.