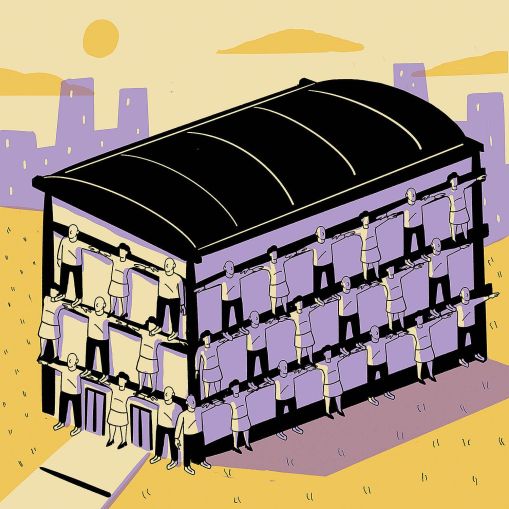 The house on Boeing Avenue hardly stood out from its neighbors in the sprawling Los Angeles neighborhood of Westchester. The second from the corner, with a bean-shaped pool in its ample yard, it sat across from a school under a row of pole-like palm trees, less than five minutes from the 405 Freeway.

Then, in December, a demolition team came to tear down the 80-year-old structure to make way for a new, four-bedroom home designed by developer Megan Blu. The process, from design to sale, is being documented on YouTube and Instagram in a series called “American Dreamhouse,” sponsored by crowdfunding website Republic.

They are part of an increasing wave of retail investment over the course of the last year — spurred by the use of apps, such as Robinhood, that offer easy access and to the markets and low minimums— that has moved markets, resuscitated failing companies, and baffled analysts.

Most recently, a prominent group of retail investors and day traders on Reddit joined forces to invest in the 1990s-era mall store GameStop, which sent the stock on a meteoric and unexpected rise, throwing the financial establishment into a spin: Melvin Capital, a hedge fund that had shorted GameStop, lost big money; Robinhood suspended trading on the stock; and Wall Street veterans suddenly grew concerned about the potential losses of the Reddit hordes. They were, in a word, shook.

As with the case of GameStop, the majority of the retail investment has been directed at stocks, but it hasn’t been restricted to the public markets only. Retail investors are looking to alternative investments as well, such as commercial real estate, as crowdfunding models and platforms continue to evolve and expand access, with lower minimums, secondary trading and more attention to local offerings.

And, on the supply side, real estate owners are turning to retail investors, through various models of crowdfunding, to fund projects that range from house-flipping to co-living to multifamily and mixed-use properties.

Janine Yorio, who joined Republic as head of real estate in June 2020, said she’s seen a large influx of investors onto their platform, though she’s not sure she can explain why. “We’re not sure what’s driving it,” Yorio said. “Basically, all crowdfunding platforms have seen record volume.”

But even as barriers to CRE investment fall, with lower minimums and easy access to a marketplace of diverse offerings, commercial real estate remains a long-term investment. So, it doesn’t offer the same kind of in-and-out trading that the stock market does. “The stock market has been very volatile and that makes day traders excited,” Yorio said. “CRE is not quite as exciting.”

Mitchell Rosen, head of real estate at crowdfunding platform Yieldstreet, agreed that even if CRE crowdfunding is riding the same retail investment wave as the stock market, the two aren’t really alike, because CRE is an illiquid investment.

That being said, there were takeaways from the GameStop-Robinhood boomlet that applied across the board. “What I do think Robinhood highlighted is that the trend of retail is so strong, it can bring the traditional kings of the universe to their knees,” Rosen said.

It also points to the ways in which investment has changed, toward a more hands-on approach. “I do think people are looking for different ways to invest their money. The trend of retail is not going away,” Rosen said.

Crowdfunding, which was first legalized through the Jumpstart Our Business Startups (JOBS) Act of 2012, has grown during its first decade to encompass an entire industry dedicated to attracting individual investors in various forms. Earlier this month, fintech firm Cadre raised a $400 million fund targeting individual investors; while last year, real estate entrepreneur Chris Senegal raised $107,000 on Buy the Block from 1,651 local inventors in Houston’s Fifth Ward, in an effort to stave off gentrification and build community wealth. (Disclosure: Cadre was founded by CO publisher Joseph Meyer’s brother-in-law.)

Both were made possible by the JOBS Act, which made way for multiple investment models that all get lumped under the term “crowdfunding,” but differ as to who can invest, how much, and under what regulatory scheme.

Many of the larger real estate crowdfunding platforms, such as CrowdStreet and Yieldstreet, primarily use Regulation D offerings, which are, essentially, traditional private placement offerings that can be marketed online. Reg D allows companies to raise capital through the sale of debt or equity securities without having to register with the Securities and Exchange Commission, and reg D offerings are restricted to accredited investors, with no cap on the number of participants.

Jon Dishotsky, founder of co-living company Starcity, launched a Reg D offering on Republic for a 16-story co-living development in San Francisco, his second foray into crowdfunding. Starcity is looking to raise $28 million with a minimum individual investment of $5,000, and it’s also exploring ways for residents to participate.

“The primary reason that we got into [crowdfunding] was not too dissimilar to our stated mission to begin with, which is to make cities accessible to everyone,” Dishotsky said.

On the opposite end of the spectrum are Regulation Crowdfunding (CF) offerings — the SEC’s actual definition of crowdfunding — which also offer direct investment into a project or an asset, but on a smaller scale. Reg CF offerings, which have been more commonly used for investing in startups or Kickstarter-like projects, have a cap of $5 million, recently upped from $1 million by the SEC, and are not restricted to accredited investors. Minimums, then, can be as low as sponsors are willing to go.

Reg CF is still limited by income, however. While any investor can spend up to $2,200 a year on Reg CF offerings, investors with higher incomes have a higher cap.

Reg CF offerings are closer to the democratizing ideal that some have of crowdfunding. “There’s a hell of a lot more people that have $500 to invest than have $50,000 to invest,” Yorio put it. “CrowdStreet, it’s still a bunch of rich white guys. It’s just online. They’re not redistributing wealth, they’re not democratizing access.”

It also offers opportunities for more local projects, like Blu’s house flip, and Senegal’s Buy the Block program, where investors might have a more personal stake in the project, in addition to a financial one.

Finally, there are Reg A offerings, which are funds rather than direct placements, and have a cap of $50 million per year. Sites like Fundrise and Roofstock are the best-known players in the space, though most of the larger sites, like CrowdStreet and Cadre, offer both funds and access to a marketplace of deals.

Recently, real estate companies have been getting into the Reg A game as well. Real estate developer Jamestown launched a retail investment product called Jamestown Invest in December 2019, offering individual investors access to a fund with a minimum $2,500 investment. The fund will invest in Jamestown projects, beginning with an Atlanta development called Southern Dairies, a historic dairy distribution plant that Jamestown is converting into 80,000 square feet of creative office and mixed-use space.

Jamestown is in the minority in managing its own crowdfunded fund, but it’s certainly not the only institutional real estate owner availing itself to the retail investor. “The adoption of cloud platforms from the sponsor side has really changed,” Yieldstreet’s Rosen said. “There is a continued acceptance of the capital-raising machine of crowdfunding. I think the tax code has really carved out a nice pitch for CRE that people are really starting to take advantage of.”

For sponsors, one advantage of going the crowdfunding route is that it’s recyclable equity, said Drew Sterrett, co-founder and CEO of LEX, a startup building a marketplace for real estate securities. “Most capital has a limited life. It is expected that capital will be returned. [Crowdfunding] allows them to return capital, and bring in permanent, non-controlling capital,” Sterrett said.

And that can be particularly attractive during a downturn, he added. “Because of the dislocations in the market, major real estate companies don’t want to sell properties outright. This allows them to be able to hold their asset, and capture value, and not have to sell in an uncertain market without taking a hit.”

The pandemic might be encouraging more people to invest their money, and more owners to seek capital via crowdfunding, but it’s also exposing some of the faultlines in crowdfunding, as real estate faces its first real downturn since crowdfunding began.

A California man who identified himself as a mom-and-pop investor from California, had, he claims, firsthand experience with that downside. In 2018, he invested in three property offerings on CrowdStreet: a multifamily asset in Queens, a Class A office building in Minneapolis, and a ground-up hotel development in Dallas.

Henley, which opened its first U.S. office in 2016, purchased the property for $23 million in 2017, with the plan to make capital improvements, raise rents, and sell it a few years down the line, according to the investor. The company raised $1 million for the project on CrowdStreet, one of five offerings it executed on the platform, with the plan to start distributions about a year in, once the capital improvements had been completed, the investor said.

But the required quarterly reports never arrived, and neither did the distributions, according to the investor. In 2019, Henley sued its property manager, claiming $500,000 in funds had been misappropriated, which put them behind on their capital improvement plan. That meant they couldn’t raise rents, throwing off the timeline. “The final nail in the coffin was COVID-19,” the investor said. His entire investment, which had a minimum entry of $25,000, is gone.

“The only thing I would have done differently would be my scrutiny of Henley,” the investor said. “Henley is a U.K. company that started operating in the U.S., and they don’t have much of a track record in the U.S.” (Henley didn’t respond to request for comment.)

The other two properties are facing delays, and expect lower returns because of the pandemic, but they’re not at risk, the investor said, and both are with local operators with proven track records.

“All the platforms claim that they get pitches and they have people on their staff to get through [them], so they do do some diligence,” the investor said. “But, at the end of the day, the investor is still the one who has the most at stake.”

Still, he hasn’t given up.

“I would continue if I had the funds, but now, it’s all tied up in these three,” the investor said. “If I get a return on capital on one of the other ones, I think I would go back.”

Update: An earlier version of this story identified the Henley investor by name, which has since been removed because the it could not be verified whether or not it was an assumed name.