Oxford's top executive for North America talks Hudson Yards, St. John’s Terminal, the future of office, and the next hot markets for investment 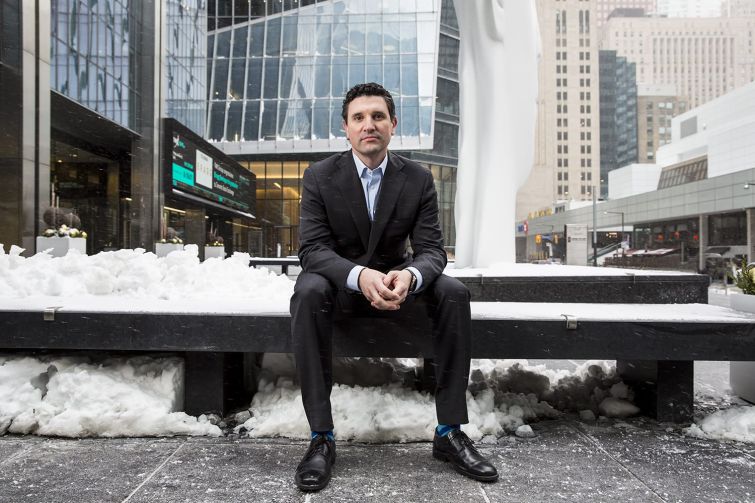 Eric Plesman has some serious skin in the game with his role overseeing Oxford Properties’ investments across North America.

That’s because Oxford serves as the real estate arm of the Ontario Municipal Employees Retirement System (OMERS), one of Canada’s largest pension funds, and Plesman’s mom happens to be one of the more than 500,000 people who have their retirement plan through it.

“It’s something that actually hits myself,” Plesman said. “If I wasn’t doing my job, then I would get an earful at the Christmas table.”

Luckily for Plesman — who serves as the executive vice president in charge of the firm’s North American operations — his mom’s pension looks to be in safe hands.

The Toronto-based company is currently in the process of redeveloping the 1.3 million-square-foot St. John’s Terminal in the West Village with its partner, the Canadian Pension Plan Investment Board (CPPIB). And the project is already fully leased up to Google as of 2019.

Aside from that, Oxford happens to be the co-developer with Related Companies on a little project on the Far West Side called Hudson Yards. That 18 million-square-foot mega-development opened its first section in 2019.

Despite the coronavirus pandemic, Plesman said Oxford’s portfolio held up “comparatively well,” and it was able to seal a $972 million construction loan at St. John’s Terminal in May and topped out on the project in November, two months ahead of schedule.

Plesman — a father of three who lives in Toronto — basically fell into the real estate world early on in his career. He joined Morgan Stanley just out of university and gave the firm his three choices for what division he would like to focus on: tech, telecom, and mergers and acquisitions. Plesman got real estate instead.

It worked out and Plesman stayed on that team for more than 10 years — working in London, New York and Toronto — before he joined Oxford at its Toronto headquarters in 2011. He also spent time as a consultant in the Netherlands and serves on the board of directors for the Greater Toronto Airports Authority.

Commercial Observer sat down with Plesman virtually to talk about St. John’s Terminal, where Oxford is looking to invest next year, and Hudson Yards.

Commercial Observer: There’s been an upheaval in the market during COVID-19. What have the effects on Oxford’s portfolio been?

Our portfolio, just as everybody else’s portfolio, struggled in certain areas and it thrived in others. Our industrial business, which represents close to 30 percent of our portfolio, did exceptionally well last year. As we see things play out in some of the other segments, it had its challenging time; we kind of see that there are better days ahead.

Part of it is just seeing the pendulum swinging in different directions. Perhaps the sentiment around office, in particular, the pendulum swung pretty far in one direction as people just try to determine what the future of that may look like. But we remain positive as it relates to our portfolio and we are fairly well-leased in our office portfolio in New York. St. John’s Terminal is 100 percent leased to Google. And, at Hudson Yards, you would find the same thing.

During the pandemic, you were able to close out on the construction loan for St. John’s Terminal and top out on construction. How were you able to get all of that done?

The team that we have on that project is just exceptional. They spent a lot of time advancing that project, making sure that we’re hitting the appropriate milestones — doing what we like to do with every development project, which is to come in on time and on budget. It’s a project that we’re really excited about, that the team worked hard in ensuring that they did all the milestones last year.

Taking a step back, could you tell me how the idea for the project came together?

We certainly didn’t have in mind a project that was going to be lining up our tenant as early as we may have. We always just saw it as phenomenal real estate in a market that we were quite excited about that was going to help continue our footprint within the New York area and our U.S. development activity in general.

It was a project of scale. It’s differentiated in terms of its approach, and I think the design and the team that we generally put around it that was there to create something special, that Google saw the same vision and excitement in moving forward.

Can you talk about how you were able to get Google to sign onto the project so early?

Once we had closed the transaction and owned the property, we spent a lot of time trying to drive what the vision for the site would be, what the potential for the site would be. We had conversations with a number of different groups, and [Google] was one and they were quite engaged. Google’s obviously grown their footprint in the New York area and different places, and they saw this as being strategic to their own workforce planning in the area.

I don’t know if there’s any other magic to it. Google is a tenant of ours, actually, in Canada as well. In the building that I sit in now [EY Tower in Toronto], it’s part of a larger complex and Google’s Canadian headquarters are actually in one building over. So, they’re a customer of ours and we’ve always looked to scale our partnerships and make those connections where we could. That probably helped, and I know that their experience had been a positive one here, and it was obviously a customer that we’re quite excited to have growing.

One of the big pieces of news to come out during the pandemic at Hudson Yards was Neiman Marcus’ closing and then the marketing of that space for office use. What’s the thinking behind that?

The project is truly a special project. There’s been a number of people that have come up and registered their interest in that space. Given the attractiveness of just the large floor plates, generally, and the success that Hudson Yards had achieved to date, and just bringing office tenants over to that node, it’s really provided a catalyst for having people be interested in it.

We’ve had a number of conversations with people and are looking at the conversion of that space. We’ll continue to see how things continue to evolve.

Is the plan, if more retailers close there, to switch it to office space?

No. Generally speaking, if you look at the retail industry, it has its challenges right now. Not being able to have the same level of traffic as it has in the past, until we get back to a point where people are feeling a little more confident in moving around, that will help influence how they may grow their portfolio or stay within their respective space. But we’re firmly focused on helping to support our tenants in those spaces today and we don’t have any other plans, other than the Neiman Marcus plans.

As the vaccines are starting to roll out in New York, have you seen an increase in interest at Hudson Yards for tenants signing leases?

I’d say I’d make those comments more broadly across our portfolio. We’re seeing some tenants making more decisions in advancing how they look at leasing their office space. We see the same thing on the industrial side, it has been exceptionally active. On the residential side, depending on different pockets within our portfolio — we just completed an acquisition in Phoenix and in some of the Sun Belt states — where you see very good activity. There are leasing decisions that are being made out there.

What are Oxford’s plans for this year?

We’re focused on just building, buying and growing best in class businesses to support what we really are targeting, which is our capital allocation [framework]. The activity that we really focused on last year is probably going to be fairly consistent with what we are planning to do this year, which was focus on logistics, focus on life science, focus on our multi-residential platform.

Are there plans to pull out of any markets or sectors that you were in before?

I think the focus is firmly on where we intend to continue to grow. We made an announcement … as to some of the life sciences investments that we made. Emeryville Public Market [in California], for instance, and [assets] just north of Boston, we made a couple of investments into the manufacturing side of the life science trend. We’ll continue to invest our capital there.

Last year, we did end up selling certain assets, but that was more decisions as we continue to pursue what the capital allocation targets are for those asset classes. Last year, we invested over $2 billion in equity in what was otherwise a fairly challenging environment, so it’s shown that where we see the opportunities, we’re going to look to capitalize on them.

A lot has been written about people fleeing major cities like New York. Have you been targeting some new cities to invest in to capitalize on that?

We have. Our investment in IDI Logistics, by way of example. That was a company we invested in at the beginning of 2019. [Oxford bought a stake in the company from Ivanhoé Cambridge for about $1.7 billion.] The timing was fortuitous, to say the least. We’ve seen the focus on that asset class and, over the course of this year, we expect to start half a billion dollars in development starts. Part of that is going to be a fairly broad cross-section of areas that are going to help cater to the consumer demand and the e-commerce trends that we continue to see.

We’re focused on a couple of key places in the U.S. Some of the Sun Belt trends that you’re seeing now, they’ve generally just handled this and performed a little bit better than the coastal markets during this, and we’re seeing that within our own portfolio. I don’t think that necessarily says we don’t believe in some of the markets that we continue to have a presence in. We continue to be active investors in those markets as well, and we look for the opportunities that are going to provide the best risk-adjusted returns.

You said that you’ll continue to be active in the markets you’re already in. Why do you think New York City is still a great place to invest in?

It’s an incredibly dynamic city. I spent just over four years of my life living there as well. I saw the resiliency of that city after Sept. 11, and there was a lot of discussion around that the city will never be the same again. And it came out of that experience even stronger.

Where the opportunities present themselves, where they’re attractive to us on a risk-adjusted basis, we’ll continue to look at it. I try to not count out New York, because those that have in the past have not had a very good track record in doing so.